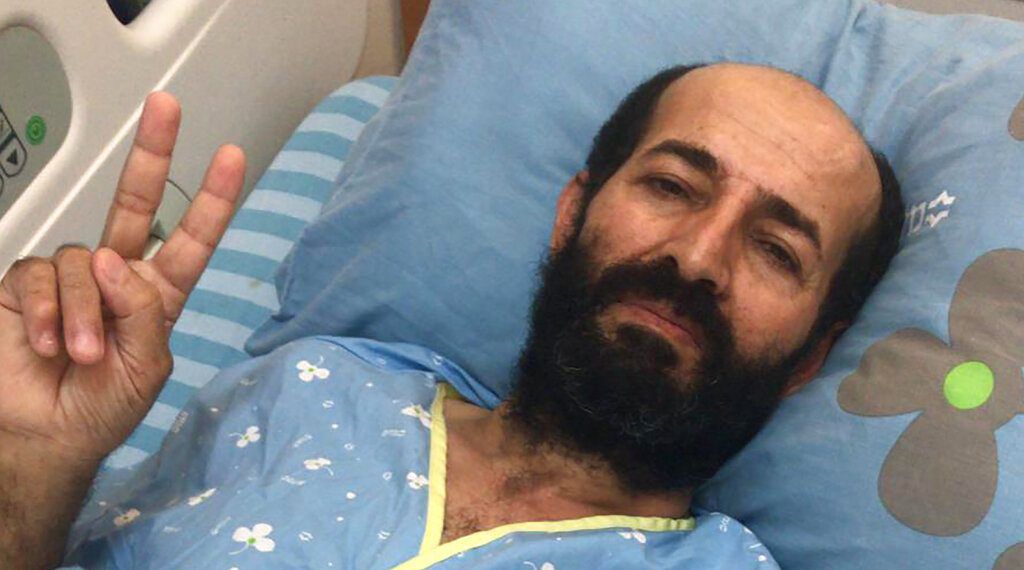 PROTEST: Maher Al-Akhras has been on hunger strike since he was arrested and held without charge

THERE is a close affinity between the people of Ireland and the Palestinian people. Both have a long history of being colonised. We have been the victim of occupation, state violence, discrimination and forced emigration.

The experience of struggle has also been similar. Last week as we remembered the deaths on hunger strike 100 years ago of Terence MacSwiney, Michael Fitzgerald and Joseph Murphy, a Palestinian prisoner, Maher Al-Akhras, was in an Israel hospital on hunger strike protesting against his detention.

Maher was arrested on July and 27 has been on hunger strike since then. Over 90 days. Maher is a father of six children and is from the village of Silat a-Dhahr in the occupied West Bank. He has not been formally charged with any offence. Like thousands of Palestinians over recent years he is the victim of administrative detention. This procedure is effectively ‘internment without charge’, a practice used by the British state and the Unionist Stormont regime for five years in the early 1970s.

Israel rejected this request by the United Nations.

In the past two decades 120,000 people have been arrested and imprisoned by the  Israeli government. 18,000 of these were children. Gaza, which is home to two million people, is the largest open air prison in the world. When I visited Gaza in 2009 I was appalled by the conditions under which citizens were being forced to live because of the Israeli siege. That situation has deteriorated, if that is possible, in the years since.

In the past two decades 120,000 people have been arrested and imprisoned by the  Israeli government. 18,000 of these were children. Gaza, which is home to two million people, is the largest open air prison in the world.

The people of Palestine existing in Gaza and in the occupied West Bank are living lives dictated by an Israeli apartheid state that steals their land and their water and destroys their homes.

In June the Irish state won a seat on the UN Security Council for 2021-22. The Irish government campaigned on the themes of ‘Partnership, Empathy and Independence’. If it is to be true to these themes the Irish government must urgently seek the release of Maher al-Akhras (who is scheduled for release on November 26); demand that the Israeli government end the use of administrative detention; and recognise the state of Palestine.

I would also urge readers to write to Maher, who is being held in the Kaplan Medical Centre, Pasternak St. P.O.Box 1, Rehovot 76100, Israel; or email its Public Relations Dept at TaliYa@clalit.org.il

PAT McGivern was a lifelong republican. In recent years she was especially well known for working alongside Marguerite Gallagher in the Green Cross bookshop at 55 Falls Road, now An Fhuiseog. She continued to do this despite many years of constant battling against and being treated for cancer.

I never heard a single word of self-pity from her. Over many decades Pat was a stalwart for the Republican struggle in the Falls/Clonard area. When she lived in Sevastopol Street and later in Devenish Close her home was open day and night to republican activists. She had a generous heart and fed and watered many a weary Republican activist in her day.

As a supporter of Republican prisoners she worked hard in support of the Green Cross. During the various prison protests and through the campaign for political status and later against strip searching in Armagh Women’s Prison, Pat actively campaigned across Ireland in support of the prisoners demands.

An active and energetic member of Falls Sinn Féin Cumann, Pat worked hard in every election campaign from the 1980s until the present day. Her kind-heartedness and caring nature was there in abundance as she cared over a long period of time for our now departed friend and comrade Paddy Mc Manus.

No part was ever too great or too daunting for Pat. She embodied in every way the spirit of Bobby Sands: “Everyone, Republican or otherwise, has their own part to play.

“No part is too great or to small, no-one is too old or too young to do something.”.

I am proud and honoured to say that Pat was my friend. Ar dheis Dé go raibh a h-anam dílis. To her children, grandchildren and great grandchildren and to her wide circle of friends and comrades I want to extend my deepest condolences.