A simple case of video killing the movie star 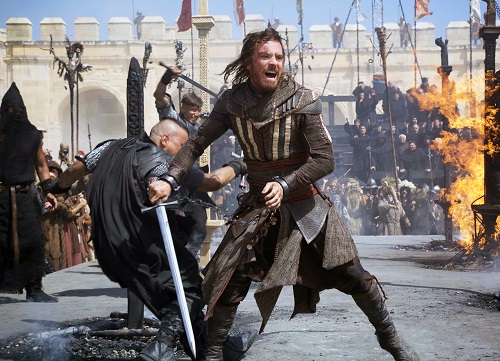 GAME FOR A LAUGH: Assassin’s Creed is strictly for fans of the video game

Convicted of murder and sentenced to death, Callum Lynch (Michael Fassbender) is given a clandestine stay of execution after he is saved by a shadowy organisation known as Abstergo Industries.

Awakening in a futuristic cell, Callum is introduced to Dr Sophia Rikkin (Marion Cotillard) who explains that Callum is a descendant of a long-dead assassin named Aguilar de Nerha and that the Abstergo organisation is linked to the ancient order of The Knights Templar.

Using state-of-the-art technology, Dr Rikkin uses Callum’s deeply embedded DNA memories to send him back through time to live and breathe as his descendant Aguilar, with the purpose of searching for an all-powerful relic which holds the key to mankind’s obedience, the Apple of Eden.

Baffling, perplexing and ever-so confusing, Assassin’s Creed is the latest in a long line of video game-inspired action movies which fail to recapture the magnetic magic of their genesis.

We’ve seen it multiple times at the multiplex, with the likes of Hitman, Doom, Resident Evil and Warcraft (to name but a few), all big screen adaptations that have struggled to make the successful transition from console to cinema.

Celluloid
Just because a video game has an intriguing plot doesn’t mean it is destined for Hollywood glory and, sadly, Assassin’s Creed is another example of how these difficult adaptations can fail to grip audiences in celluloid form.

And indeed it is a shame, because Assassin’s Creed boasts a magnificent cast of award-winning thespians, and a tantalisingly intriguing sci-fi plot which does exhibit moments of promise.

Sadly, the execution of the storyline is so muddied, laboured and confusing that the entire movie is bogged down under the weight of its own bulky, clunky chronology.

Hardcore fans of the successful franchise will no doubt lap up the strange mythology and moody action scenes but, if you’re a newbie and fancy giving this a go purely on the strength of its impressive cast and Quantum Leap meets Dan Brown storyline, you’ll be sorely disappointed.

While Macbeth director Justin Kurzel keeps the proceedings tense, and the five-star cast do a great job of keeping straight faces throughout, the overly fractured and confusing plot will lose most people’s interest by the time the first laboured hour draws to a close.

A movie strictly for fans of the video game, the only thing Assassin’s Creed guarantees is pins and needles in the rump and a piercing migraine.