Abseil in memory of tragic mum of two sons 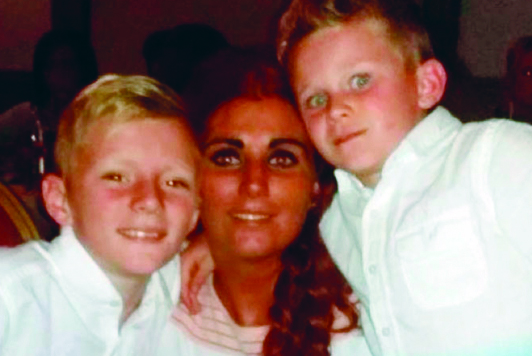 Louise with her sons Tom and Martin, aged 10 and seven-years-old

FAMILY and friends of a young West Belfast mother who tragically lost her life this year will be abseiling down the Europa Hotel in memory of the talented hairdresser.
Louise McIlwaine from Lenadoon passed away after sustaining a fatal head injury following a seizure in January this year. At only 30-years-old she left behind two boys, Tom and Martin, aged 10 and seven-years-old.
Almost eight months on 30 of her friends and family are preparing to abseil down the famous city centre hotel in a fundraising effort to establish a trust fund for her sons in her memory.
Louise’s cousin Lynsey McIlwaine told the Andersonstown News: “After contracting a blood infection when she was 27, Louise received two life-saving operations. One of the side effects of her brain operation was seizures, which became more frequent as time went on, but she battled through the pain and discomfort so she could spend every day with Tom and Martin.”
“She would have done anything to provide a good start in life for the boys, so it's only fitting we would like to leave them a trust fund in their mother’s memory. We want to help give them the best start in life, just like she would have,” she added.
“She was full of life, kind, fun loving – she would be the first to volunteer for this.”
Enlisting the help of their family, the abseil has been in the pipeline for almost two months and the group are undergoing final preparations for the dare devil drop in just two weeks’ time.
Lynsey’s uncle Jim McIlwaine said: “Lynsey has abseiled before but a few off us are using this to overcome a fear of heights.
“The kids were eager to get in on the action too but due to age restrictions they’ll be cheering us on from the side-lines.
“We’re just hoping that between now and the big day that as many people from Louise’s community can come out and support this cause because it’s all about he kids” he urged. “At 18-years-old some kids can need money to buy a car, stay in education or to travel. We know the money won’t bring their mother back but it can help given them a financial kick-start that she would have worked hard to provide for them if she was here.
“Any donation, no matter how small – be it taking two minutes to donate £2 – we would be grateful for that,” added Jim. So far aunts, uncles, cousins, neighbours and friends have been working hard to reach their £6,000 target, which will be split between the boys.”
You can contact Jim, Lynsey and other friends and family for a sponsorship form or via their justgiving page at www.justgiving.com/crowdfunding/europaabseil