After 42 years, family still battling to find out who shot their six-year-old boy 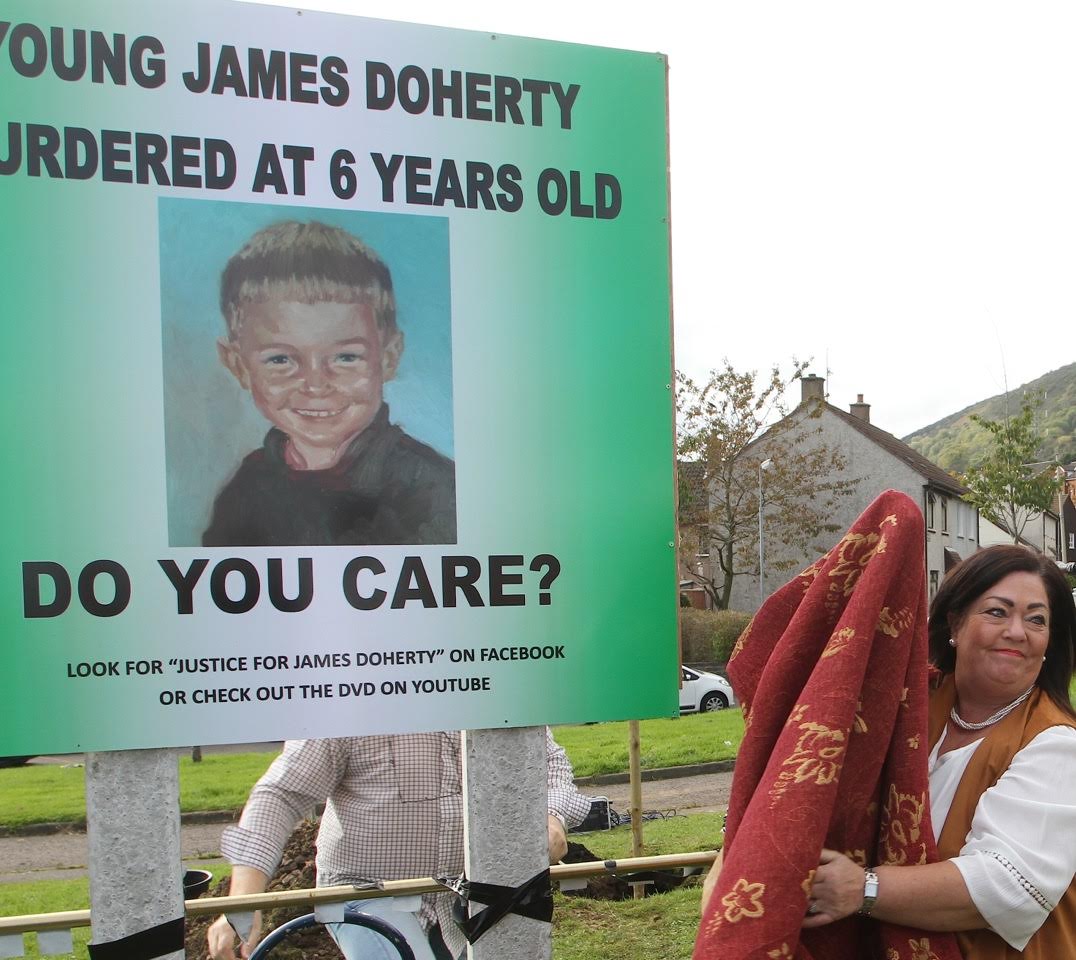 Relatives for Justice are appealing for anyone who has information about the murder of a six-year-old child in Belfast to come forward.

A commemoration was held in Turf Lodge last Sunday for young Jim Doherty who was shot and killed in 1972. Hundreds of people attended the unveiling of a memorial to Jim at the Monagh Road entrance to the estate where Clara Reilly of RFJ gave an oration. Jim’s mother, Ena Doherty, attended the event along with her children, grandchildren and great-grandchildren.

Jim was shot as he played with his siblings in the front garden of his home at Norglen Crescent on the afternoon of Sunday, October 8, 1972. He died of his injuries a week later. At the time, the family were treated outrageously by the RUC who merely said that their son had been killed by a gun and that it was probably republicans that were responsible.

The Official and Provisional movements both made contact with the Doherty family denying any involvement and stating that none of their members had been in the area at that time and that internal investigations had also found that weapons had not been removed from their dumps.

In recent years, Ena engaged with the Historical Enquiries Team (HET) when they were reviewing the case. The HET found that a .38 calibre bullet was removed from the child’s body and given to the RUC. However, their enquiries revealed that it has since inexplicably disappeared.

The RUC said at the original inquest that there was no military presence or activity in the Turf Lodge area at the time of the shooting but investigations by the HET revealed that British soldiers were indeed on patrol in Turf Lodge on October 8, 1972 and they noted gunshots in Turf Lodge in the minutes prior to Jim’s shooting.

The HET were unable to exclude the possibility that the shots referred to in the British army log were connected to the child’s shooting and they concluded that the police investigation into Jim Doherty’s death was “extremely basic” and it was “never effectively invest-igated”.

In the book Killing for Britain, written by a former UVF member, it is claimed that the UVF were responsible for Jim’s shooting. A car in which members of that organisation were travelling is said to have hit a pothole in the road causing a gun to accidentally discharge. It claims that the gunmen were targeting a member of the IRA who was living in Turf Lodge.

“For the last 43 years I have lived with the awful heartache of Jim’s murder,” Ena told Daily Belfast. “I have never had a proper investigation carried out into my son’s death. There has been no recognition by the police even that my son was murdered. This has simply added to the deep sense of loss and injustice which is still very tangible.”

The frustration and sadness Jim’s grieving mother has carried for over four decades must be eased, says RFJ who are calling on the Police Ombuds-man to look at the case.

“RFJ have supported the Doherty family over the years in their search for the truth into the killing of their son Jim,” said RFJ’s Clara Reilly. “We believe that the Police Ombudsman should investigate the failings of the RUC to carry out a proper investigation into Jim Doherty’s murder. The Attorney General should also grant a new inquest into Jim Doherty’s killing. The RUC and the criminal justice system have failed the Doherty family. The HET review of the case was not a proper effective and independent investigation into Jim’s death.”

Anyone with information should contact Paul Butler at RFJ on 02890627171 or email paul.butler@relativesforjustice.com