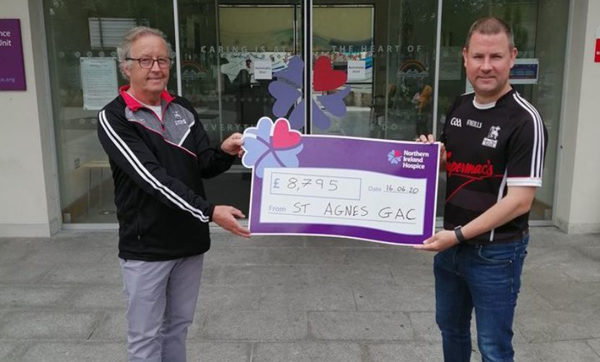 MEMBERS of St Agnes’ GAC have gone the extra mile during lockdown as they raised a huge sum for the Northern Ireland Hospice during their ‘Get Fit for the Hospice Challenge’.

With training and games put on the backburner over the past three and a half months, club members remained in touch through their various Whatsapp groups where they challenged each other to stay in shape ahead of the belated new season that is now just a matter of weeks away.

As players clocked up the miles, club chairman Frank Caldwell identified an opportunity to put their work to good use by encouraging players to seek sponsorship with the money all going to charity and joining the many clubs and individuals who have put their energies to good use over the past three months.

“It started off with people out doing a bit of running and they were posting their times and distance on the Whatsapp groups,” he explained.

“I suggested that by doing that, maybe we could raise something like £1000 for the Hospice and it sort of grew legs from there.

We ended up raising a good bit of money for them in the end.”

Indeed they did, as the Aggies were able to hand over a cheque for £8795, smashing their initial target.

The end result is that the money the club was going to add will now be directed to a different charity, meaning two will benefit from the Andersosntown club’s venture that saw members either run, walk or take part in exercise from home in order get involved and do their bit.

“We tried to make it comfortable for everybody in that if you wanted to challenge yourself, that’s fine, but initially, it was simply a 5k run, walk or a form of exercise in the garden as some people had to stay at home,” added the Aggies’ chairman.

“It was just an idea to make it comfortable for everybody and they would check in when they got it done, put it out to their friends and family to sponsor them, and we had a link into the Hospice for that.

“Initially, we had a target of £1000 and then the club would donate another £1000 on top of that to double it, but this thing just grew legs and ran away with itself, which was great.

“That £1000 we were going to add will now to a different charity, so that will be two charities what will benefit from it all.”

With people in isolation for such an extended period of time, the venture was also a good opportunity for players and club members to do something collectively and retain the club spirit.

In all, it was a huge success with the Aggies exceeding all expectations.

“It kept everybody in touch and it was a great buzz for two or three weeks there,” Caldwell agreed.

“People were posting up what they had done and it helped keep that bit of a bond with the club. Hopefully, things start moving forward now and we can get back together again soon.”