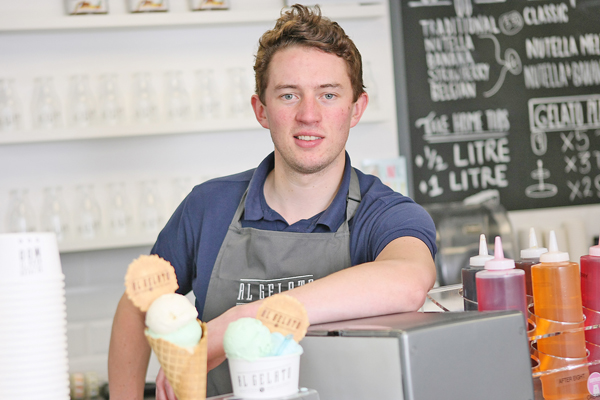 STARTING OUT: Alistair Macauley in his new shop, Al Gelato, on the Ormeau Road, where he puts his newly-learned skills to work

MANY of us dream of packing in our office jobs and demanding careers to follow our passions – and one man from South Belfast has done just that!

Solicitor Alistair Macauley from always had the ambition to open his own shop, but after qualifying as a lawyer in 2012 he expected it would be a legal practice as opposed to the ice cream parlour he has now opened.

“As a student I worked in a coffee shop for five years, I enjoyed it so much I actually continued to work in one as a solicitor,” he explained. “I was aiming to open my own practice, so I guess I always had the inclination of setting up my own shop in a way – maybe just not like this!”

The 28-year-old graduated from Queens in 2012, practicing law in Dublin and Belfast for five years before his dream took him to Italy earlier this year.

“I thought if I really am going to do this then I’m damned sure going to do it well and so back in February I travelled to La Bologna in northern Italy and studied a Gelato course,” he said. “There I learnt the skills and worked on perfecting my methods before graduating last month and finally opening my own gelato and coffee shop just last week.”

His shop on the Ormeau Road – Al Gelato – houses ‘the lab’ where Alistair produces his freshly made gelato, experimenting with exciting new flavours for his loyal customers each and every day.

“This isn’t your run of the mill ice cream,” said Alistair. “First of all the freshness with gelato is obvious as most ice cream blocks from the supermarket can be pre-frozen for months and months whereas my gelato is made fresh and kept at minus 14 degrees.

“It’s also a lot more creamy than many ice creams and hopefully it’s these things that will keep my customers coming back for more.”