Alice is in good hands with her local Colin Care team 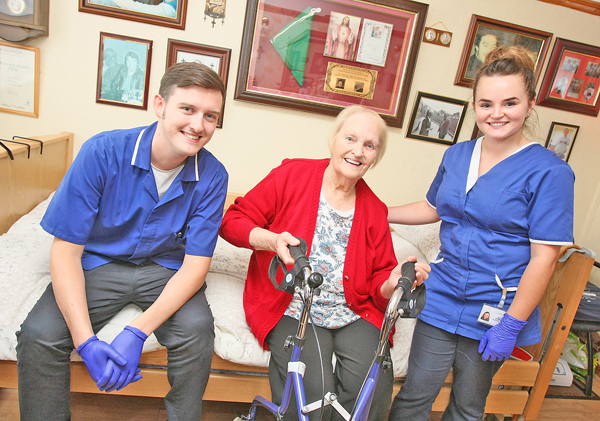 88-YEAR-OLD Ballymurphy woman Alice Toner has faced many battles in her day.

From working in the mills to raising 13 children with her beloved husband Francie during the difficult days of the Troubles, the couple also buried their son Frankie in May 1982 after he was murdered by the UVF at the age of 26.

Today Alice has many health problems but luckily her loving family are on hand to help her 24 hours a day along with the dedicated staff of Colin Care.

Speaking to the Andersonstown News from her Ballymurphy home Alice said: “I couldn’t do without those young girls and fellas from Colin Care, they come out to the house four times a day to help me, they always have a smile on their faces and a pleasant word for me.

“They help me up in the mornings, they help to get me washed and dressed. They help me again at lunch time, tea-time and then they sort me for bed. It’s hard for me because I was always such an independent woman, but there comes a time in your life when you lose your independence and you have to put your faith in others and I honestly couldn’t ask for better carers than the ones who visit me from Colin Care.”

After a series of health issues which saw Alice hospitalised on-and-off Colin Care were assigned to her in May 2015.

“You can’t get rid of a bad thing,” said Alice. “I’ve more lives than a cat. I’ve been admitted into hospital four times in as many months. Thank God I’m being looked after in my own home by my family and my carers, or my wee nurses as I call them.”

Alice’s son Gerard said: “Our mother is very lucky because we are such a big family, but everyone has their own commitments as well. Putting her into a care home wasn’t an option so the carers were then put in place.”

Alice has lived in her Ballymurphy home for over sixty years. She lives there now with her two sons and her disabled daughter Theresa, with the rest of her family living close by.

“My daughter Theresa loves the wee carers, they come in and ask her how her day was and how things are going with her. They make her feel special. She loves them.”

Alice can no longer walk and now sleeps in the front room of her home.

“My bed has been here since May 2015. I can’t really get used to it but sure it’s better than nothing.

“I love sitting here and looking at all my photos on the wall, of my son and husband. My son Frankie was murdered, the UVF shot him dead in the fruit shop he worked in over in North Belfast, and my husband Francie was also shot and he died eight years later, he still had shrapnel in him. I always tell everyone that I had the best man in the world in my husband, he was the best family man going.

“My husband drove the Long Kesh bus for over 20 years. He was very well known. This was always a happy home especially when my husband was living, you came in laughing and you went out laughing. Nobody had a bad word to say about him.

“I have great faith, it has carried me through my troubles. I love my faith. There’s a wee nun who comes out to me and our Theresa of a Tuesday, she gives us Holy Communion and I think it’s just wonderful. It’s lovely to have her come into my home because I know I have the grace and blessing of God when she’s here.

“We would never have survived my son’s murder and my husband’s death without my faith.”