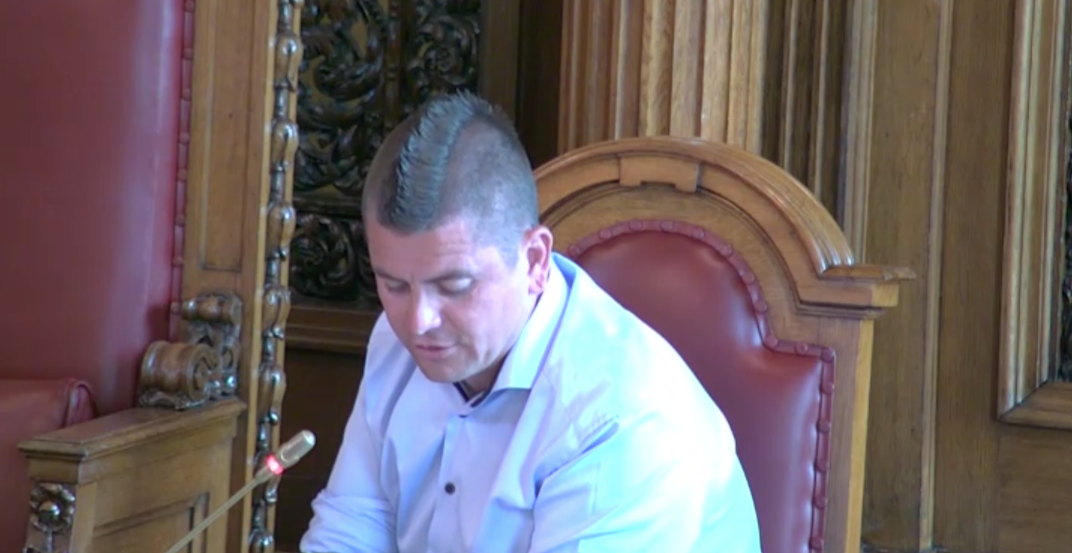 LAST OF THE MOHICANS: Danny Baker steps down as First Citizen.

IT was always going to be a Belfast City Council meeting like no other for the AGM on Monday night. (Click here for video of mayoral installations.)

Often a highlight in the calendar year of local government, only 18 members were present in the Chamber at City Hall in order to obey social distancing guidelines brought by Covid-19.

Indeed, it was the first meeting held since March due to the pandemic and there was important business to be done – namely the appointment of a new Lord Mayor and Deputy Lord Mayor.

Outgoing Lord Mayor Danny Baker only took on the role of the city’s First Citizen in December following John Finucane’s election as North Belfast MP, but made a notable impact all the same.

Danny described the role as a “privilege” and an “honour” and said wearing the chain made him fall in love with his city all over again. Not surprisingly, he said his highlight was opening the brand new Brook Leisure Centre in his native Colin area.

Danny also praised the leadership of Council at March’s meeting when the tough but right decision was taken to cancel St Patrick’s Day celebrations in the city – a move he said “saved lives”.

Danny received widespread congratulations for his short but positive tenure as Lord Mayor from across the Chamber, particular about his big smile. Sinn Féin Group Leader said Danny was a “Mayor of the people”. DUP’s George Dorrian joked that Tik-Tok would not be compulsory for the next Lord Mayor and PUP’s John Kyle said Danny was the First Lord Mayor to face a global pandemic.

It was out with the old and in with the new as DUP’s Frank McCoubrey was elected the new Lord Mayor of Belfast. (Click here for video footage from meeting.)

The Highfield man, who represents the Court DEA, was first elected to Belfast City Council in 1997.

“Communities across Belfast have demonstrated the true spirit of the city throughout this ongoing pandemic, and I have seen first-hand how people are helping their neighbours and supporting one another,” he said.

“It is my hope that there is a ray of light at the end of this, where people and communities will build on this spirit of cooperation and go on to build a better Belfast for future generations. We are a resilient people and a resilient city, and we will get through this, together.

“Special tribute must be made to all those who have worked on the frontline throughout this crisis – in Council, in our health service and emergency services, care homes, and our business community. Many individuals and groups have made such a difference throughout our city, looking after the most vulnerable day after day.  They are what makes this city what it is, and we should be eternally grateful to those who have stepped up.

Next up were some words and tributes to outgoing Deputy Lord Mayor Peter McReynolds of the Alliance Party.

The East Belfast representative enjoyed a busy year – juggling his office duties, getting married and facing a global pandemic.

Peter said he “loved every minute” of learning of the importance of the role and recognising the work people across the city do.

He also received kind words from all parties for his hard work and commitment to the role and his down to earth personality as a person.

'This Ardoyne man will do you proud'


It was on to the appointment to the new Deputy Lord Mayor – SDLP Oldpark councillor Paul McCusker.

Known to many across the city, Paul is recognised for his work as a community activist and his passion for helping the homeless and those with alcohol and drug addictions.

“It’s an honour to be chosen as the Deputy Mayor of Belfast, a position I will use it to highlight and give a voice to those who feel forgotten.

“What we have seen during Covid-19 is how the city has come together to support those most vulnerable and my role through the year will be showing Belfast as a city of compassion, where we highlight all the positive work that has been happening and carry that on throughout the year.  For me, it is about giving those people who often feel marginalised in the city a voice. Those who are homeless, suffering addiction, those with mental health issues and to listen to the concerns of all our young people who deserve a platform to have a say in their future.

“I’m looking forward to the year in office and from the bottom of my heart thank you to everyone for their kind comments. This Ardoyne man will do you proud.”

Other business on the night included a number of councillors signalling their solidarity to black people across the world after the murder of George Floyd in Minnesota. The DUP’s George Dorrian was also appointed as an Alderman, replacing former Councillor Guy Spence.

The meeting concluded with a final reminder for members to obey social distancing when speaking to each other after the meeting – a sign of the times even in City Hall.