SQUINTER: All’s not rosy in the White House garden 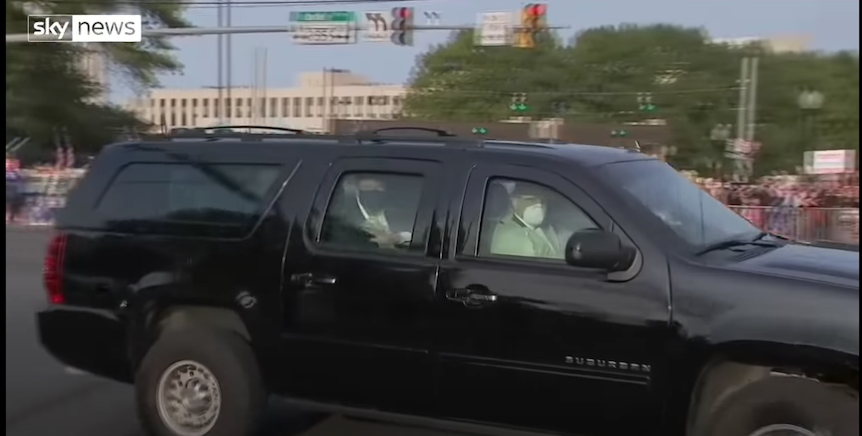 SQUINTER has no idea whether Donald Trump has Covid or not. The planet has been buzzing with colourful theories and eybrow-raising speculation since the US President first revealed in the early hours of Friday past that he had tested positive.

Much of it centres on the idea that since Trump is in such deep doo-doo ahead of next month’s election (trailing Biden by 14 points, according to one poll) that he was bound to come up with a Trumpian doozy in a bid to inject a bit of vim (or perhaps Domestos) into his flagging hopes.

Squinter enjoys a good conspiracy theory as much as the next man, and the idea that Trump has inveigled not only his campaign team, but the staff of a hospital as well, into going along with a bogus Covid narrative is the stuff of which good conspiracies are made. And the fact that his diagnosis means that he won’t be committing a further act of monumental self-harm in a second debate with Joe Biden seasons the pot just a little bit more.

What Squinter does know is that Trump is a pathological liar. In the words of his dear old mother, the Don is a bigger liar than Cut the Begs – and he got thrown out of Hell for lying. And what Squinter further knows is that if indeed this claim is bogus, then Trump is milking every bit of it for drama and airtime in just the way you would expect him to had the thing been a big conspiracy.

The photo opps from the Walter Reed Army Medical Centre, for instance. Tieless, pale, but working away at a desk in the hospital (even if he was signing a blank piece of paper with a child’s marker, as close-ups revealed). Taking a drive outside the hospital to wave at supporters who had gathered maskless to wave flags and shout support. And then there was the fanfare of the early and triumphant Trump discharge.

It was typical Trump theatre, and theatre was exactly how a doctor at Walter Reed described it.

“Every single person in the vehicle during that completely unnecessary ‘drive-by’ just now has to be quarantined for 14 days,” wrote Dr James Phillips on Twitter. “They might get stick. They may die. For political theatre. Commanded by Trump to put their lives at risk for theatre. This is insanity.”

On the flipside, the big Covid hothouse rallies where Trump encourages the crowd to shout and scream so loud that they’re spraying each other with virus are where the President does his best work. They’re so irresistibly dramatic that they lead the TV news just about every night, and for him to give that up in exchange for tweets from a hospital room and the odd photo stunt seems to Squinter to be a trade that he wouldn’t lightly make.

So, yeah, Squinter reckons Trump’s got Covid, for the above reason and also because it’s now been shown that the White House has turned into a Covid petri-dish after the September party in the Rose Garden at which Trump announced his nomination of arch-conservative Amy Coney Barrett to the Supreme Court. Footage has emerged of maskless attendees, eight of them later tesing positive, hugging and kissing each other with gay abandon (of which super-Catholic Amy would never approve).

Did Trump and Melania catch it there too? The timeline fits and the location is eerily suggestive as well. For it was in the Downing Street Rose Garden that Dominic Cummings staged that extraordinary press conference where he claimed he had driven 60 miles while Covid-positive with his wife and children in the car in order to test his eyesight.

At which point Squinter recalls that the celebrated American naturist Henry David Thoreau once observed: “Truth and roses are covered in thorns.”

A cup-winning breakfast gets the thumbs-up

HERE it is: the breakfast of champions. Egg in a cup has been part of Squinter’s weekend breakfast regime for as long as he can remember, but when he tweeted out this picture he had no idea how deeply ingrained the dish is in the Belfast psyche.

Method: Place the two eggs in a pan of boiling water and leave for eight minutes. When the eggs are nearly done place two rounds of bread in the toaster. Take eggs from pan, remove shell and place in a mug. (For best results use Yorkie or Rolo Easter egg mug.) Season with salt, add a knob of butter and, using a fork, chop eggs roughly until butter is melted and fully integrated. Butter and slice toast. Serve hot with tea.

Squinter’s mouth’s wattern’ just typing that, if the truth be told. And a hell of a lot of people will understand why, given the positive reaction that the egg in a cup recommendation sparked. But there was a fly in the ointment, or in the eggs, if you like. Most people thought Squinter had badly missed a trick by not adding a pinch of black pepper.

It wasn’t an oversight – salt and butter is all that Squinter has ever had with egg in a cup, much as he likes black pepper on poached eggs, sliced tomatoes, cabbage, pasta, setra, setra, setra.

As ever, a lot of people tried to improve on a classic by the addition of various bits and bobs, all of which left Squinter cold as workhouse gruel. Except one suggestion that involved crumbling a little black pudding into the mixture. And much as Squinter is reluctant to mess with perfection, he has to say that sounds pretty damn great.

Maybe you can teach your granny to suck eggs after all.

THE latest triumph of Boris Johnson’s ‘world-beating’ test and trace system is to have left 16,000 positive tests off the official tally. That’s a horrific enough revelation, but when we consider that the knock-on effect of that is that 50,000 potentially infected people were not told to self-isolate because of the blunder, we can start to see the scale of this latest fiasco.

There are 16K positive cases. And 50K potentially infected people not contacted. Said 50K happily going about their daily lives without any idea that they may be hosing virus all around them. And who the hell knows how many K people are getting infected in turn? The multiplication implications are mind-boggling.


And what was it that caused this catastrophic cock-up? A satellite malfunction in Alpha Centauri? An atomic glitch in the large hadron collider? A split in the space-time continuum? Well, no, actually. The Excel file in which the cases were meant to be stored had reached its capacity and the 16,000 new positive cases simply couldn’t be included. Which meant that the government’s much-vaunted ‘dashboard’ which allows them to micro-manage the crisis almost in real time was full of duff information. A trashboard, you might say.

Just before we start fighting over bog roll and dried pasta again, my industry should perhaps reflect for a second on whether giving experts the same airtime and column inches as blowhards, bucketmouths and Facebook graduates was worth the fun and clicks.

For those of you who don’t know what Excel is, it’s a Microsoft spreadsheet feature that allows for the easy storing and management of data. You’ll probably get a basic version for free on a laptop from Argos. You might use it to manage your domestic budget. When it stretches its legs it might even be capable of managing stock control and payroll at the Spar round the corner from you. Yet somebody thought it would be capable of managing a pandemic in a country of 60 million people.

The blame game is already under way (no, relax, not the TV show – we’ve suffered enough this year). The Tories rushed to point the finger at Public Health England (PHE). In turn, the PHE said it could only work with the data it receives from the government’s test and trace operation. “We report the data when they send it. We didn’t get it,” a PHE spokesperson told Sky News.

She’s the former head of the telecommunications giant Talk Talk, who was at the helm in 2015 when two teenage boys hacked the network and stole the data of 160,000 customers. Dido was forced to admit that the data – including bank details – had not been encrypted. Top managing, Baroness.

It would be interesting to speculate on how Harding answered questions about that debacle when she was interviewed for the test and trace gig, but sadly we’re denied even that guilty little pleasure as she wasn’t interviewed, she was appointed by Dominic Cummings. Sorry, Boris Johnson.

Anyway, where were we? Oh, yes – a telecoms executive who presided over one of the most serious data breaches in UK history was appointed to head up the data-driven fight against Covid in the UK. And now that the data has been ballsed up, it’s not her fault but that fault of the PHE, which has nothing to do with gathering the data. All clear? Good, let’s crack on.

In another life, Dido is on the board of the Jockey Club, the UK’s largest commercial horse racing body. It is based in Newmarket. The MP for Newmarket is Tory Health Minister Matt Hancock, who in the past year received £70,000 in donations from leading horse racing figures. When Covid restrictions began to be eased at the start of June, the first major sport to be given the go-ahead by the government to resume was – altogether now! – horse racing.

What’s the betting Dido’s married to a Tory MP for something? (Hint: she is.)