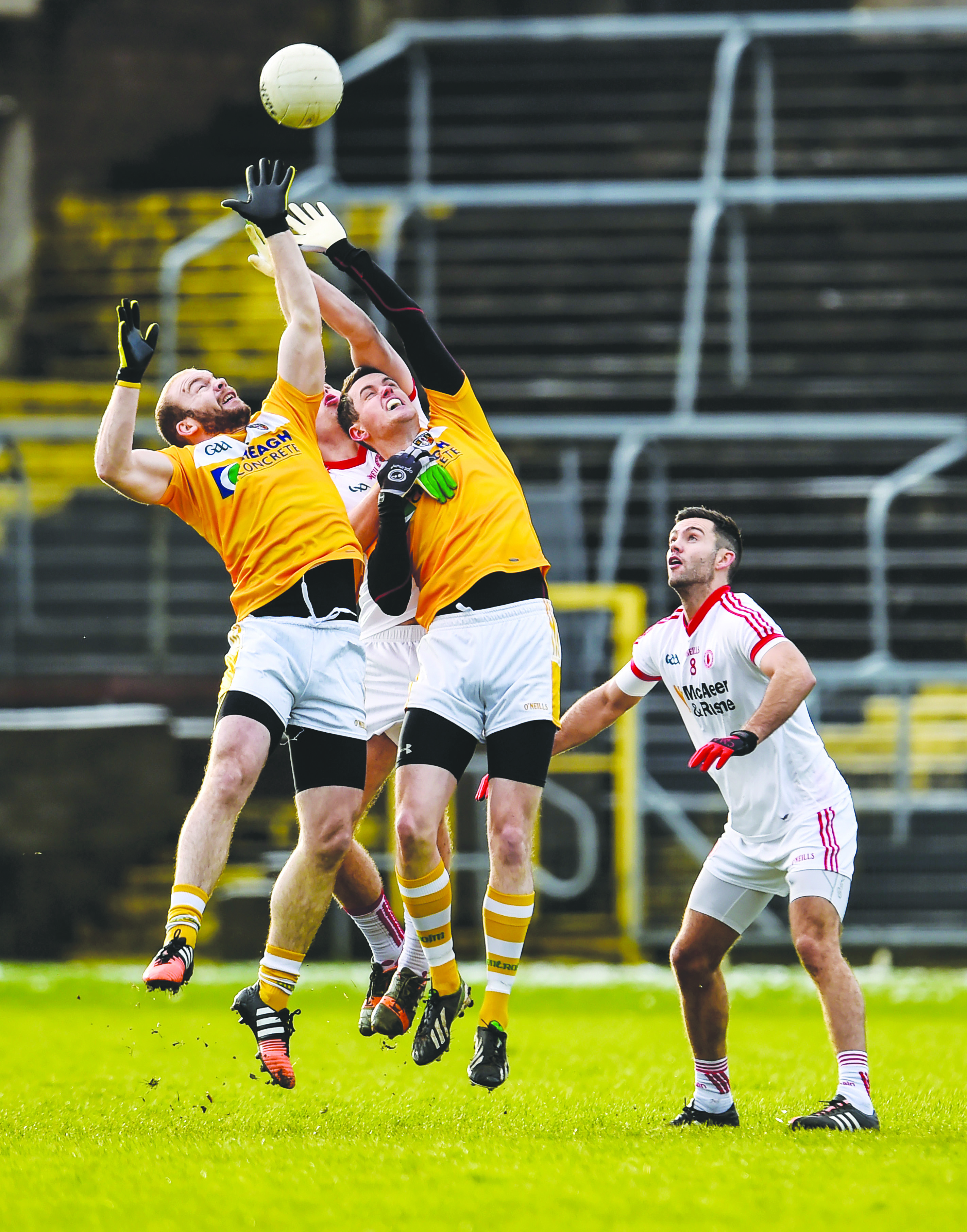 Sean McVeigh says Antrim will need to improve if they are to defeat Wexford on Sunday at Corrigan Park. The Saffrons opened their league campaign with a five-point win over Carlow last Sunday.

SEAN McVeigh believes Antrim must improve on last Sunday’s performance against Carlow if they are to defeat Wexford this weekend. The Saffrons recorded a 1-12 to 0-10 win in Dr Cullen Park and will seek to make it two wins from two when the Model County travel to Corrigan Park on Sunday afternoon (throw-in 2pm). Both counties are tipped to challenge for promotion in the coming weeks and David Power’s side also made a winning start to their campaign last Sunday by beating Leitrim 0-14 to 1-10 at Bellefield. Antrim were good value for their victory over the Barrowsiders, but McVeigh believes more will be required to defeat Wexford. “Next week (against Wexford) is definitely going to be a tough game,” said McVeigh. “We are at home which is a plus but we haven’t played in Corrigan that much. “Every game in Division Four is tough. Every team can beat each other and we know what to expect. “Wexford came down last year and, in my opinion, they are a good Division Three or Division Two team. “We will have to up our performance from this week to next if we want to gain anything out of the Wexford game.” In a departure from the norm, both Antrim and Carlow stuck to their selected 15 for last Sunday’s Division Four opener in Dr Cullen Park. Changes to the programme concerned only the positional switches as the Saffrons tweaked their formation prior to throw-in. As expected, the returning Niall McKeever moved to midfield where he was partnered by John Carron. There was also a familiar jaunt in the direction of Chris Kerr as McVeigh took up his position in the full-back line. On the wrong side of 30, McVeigh’s days in the engine room could be numbered. His experience and guile still make him a valuable asset in the full-back line. In the Dr McKenna Cup clash against Tyrone, McVeigh made a number of timely interceptions as the Saffrons held Mickey Harte’s men to just four points in the second half. Last Sunday, McVeigh looked assured against Chris Blake – holding his man scoreless until the Carlow forward was subbed five minutes from time – and he admits he feels more at home in defence. “We are a squad team now. There are no substitutes now, they are replacements,” said McVeigh. “We are playing tactical football. I would play anywhere. “I do feel comfortable at full-back. I have played there more often over the past two or three years than I have at midfield. “I think the type of midfielder has changed – they are now leaner and taller and maybe more athletic than myself. “I enjoy trying to win my own battles at full-back but I’ll play corner-forward if they ask me to.” McVeigh’s versatility has helped him remain a vital cog in the Antrim machine as Frank Fitzsimons and Gearoid Adams certainly aren’t short on options in either defence or midfield. Michael McCann and Mark Sweeney have lined out at midfield for Antrim in the past while Sean Burke, Jack Dowling, Paddy Kelly and Patrick Gallagher were all on the bench last Sunday. In defence, Niall Delargy and the Johnston siblings, Ricky and Marty were also held in reserve while Declan Lynch remains sidelined through injury. It highlights the growing strength-in-depth of the squad and McVeigh feels the younger players, like Connor Burke, are already making their mark on the team. “I am as new to full-back as Connor (Burke) is. I am probably the oldest player on the team so I’ll give him as much guidance as I can,” said the Ballymena native. “Connor is a quality footballer and he has that bit of arrogance about him which suits his game really well. He had a job to do against Paul Broderick and he did it really well.” Having lost to Carlow two years ago at the same venue after letting a six-point lead slip, Antrim certainly owed the Leinster side a defeat. The Barrowsiders also left St Paul’s with a point after a hard-fought game at the start of last year’s league campaign and McVeigh was pleased to gain both points from Sunday’s opener. “Aye, we probably did owe them one but we didn’t really think too much about it,” said McVeigh. “It is a new team and a new management. Our philosophies are different this year. “The first game in the National League, away from home - we are happy with the two points. “We wouldn’t be happy with the performance, especially in the second half. “We will have to build on the positives for our next game. “We made a few simple mistakes that we shouldn’t be making and we could have been further ahead. “We missed a few scores and missed a goal opportunity. “The second half didn’t meet our expectations but that is something we can look at during the week.” Antrim will hoping that their newly-appointed captain Kevin Niblock will be fit to play against Wexford after the St Gall’s attacker was forced to retire from Sunday’s game with a dead leg. Fitzsimons and Adams will also be hoping the St Mary’s and UUJ players have emerged unscathed from their Sigerson Cup games this week.