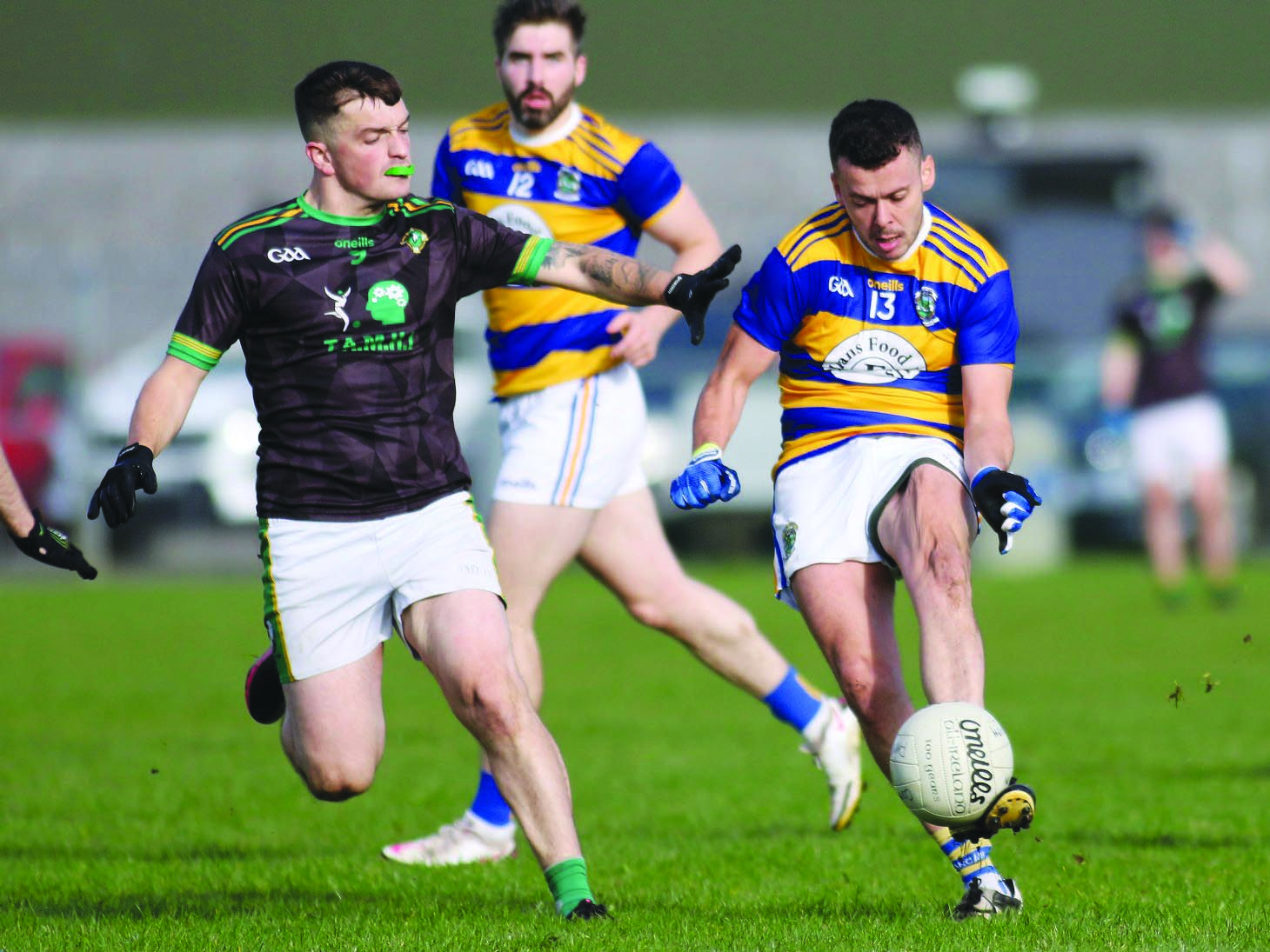 RASHARKIN stood tall in the face of a determined comeback by Pearse’s to claim a place in the final of the Junior Football Championship following a lively semi-final at Toome on Sunday.

In a repeat of the Division Three final, the North Belfast lads started the better with corner man Finn Grew firing over the bar a couple of minutes into proceedings.

Rasharkin did not take long to reply and dominate proceedings in the next phase with their midfield pairing of Jack Quinn and the Ruairi O’Boyle prominent.

They opened account on four minutes as Liam Quigg raced up the right hand side to raise a white flag and Conor McFerran followed suit.

The South West side had gained the advantage and when Gerard O’Hagan took advantage of a long delivery to finish to the net they had claimed a four-point advantage, increased by one when Quigg hoisted another.

Having nipped away into a five-point lead, the Dreen residents did look at ease with the situation, but the trend of the game was about to change as back came Pearse’s.

Towering full-forward Declan Hackett was causing problems for the Rasharkin rear guard from the outset as high deliveries were to prove ideal for the front man. He took advantage of such delivered by Ethan Devine split the posts on 12 minutes.

Midfielder Devine looks a young player with potential aplenty and he was involved in the next couple of scores as the very accurate Stephen Fitzsimmons punished indiscretions on the former by sending back-to-back frees between the posts.

Pearse’s had taken a grip on proceedings and a score from Devine on 15 minutes reduced the gap to the minimum at the first water break.

Having been left much in arrears for the second part of the first quarter Ciaran McCartney’s Rasharkin returned to the offensive again to add a Quigg point.
Although Pearse’s replied in kind via Finn Grew, a further trio of strikes ensured Rasharkin led 1-6 to 0-6.

Rasharkin did increase advantage nearing half-time and respite, but Pearse’s were to have the last say in the period and an injury-time strike from Piaras Donaghy reducing the gap to a single score at 1-7 to 0-7.

The start of the second portion and all to play for and it was to be Rasharkin who were to nip away from the start traps the quicker as Darragh Quigg, Liam Quigg and the hard working Shane Hasson all fired over the crossbar.

Another well-directed free kick from ace marksman Stephen Fitzsimmons got Pearse’s going in the second half, but Gerard O’Hagan quickly restored Rasharkin’s six-point advantage at the other end.

Leading 1-11 to 0-8 going into the final quarter, Rasharkin looked assured of their place in the decider, but if such was the case, nobody had informed the North Belfast men as they proceeded on the comeback trail.

Rasharkin seemed to have lost their way and Pearse’s seized the advantage when Liam Deggan split the posts.

Rasharkin did look in trouble having seen a hard earned lead diminish to just a couple of points.

The scent of a victory was in the air for the Pearse’s and such increased in volume when a last-ditch challenge of the illegal kind was punished when the ever accurate Fitzsimmons stroked the resultant free firmly between the posts and reduced the Rasharkin lead to the bare minimum with just a couple of minutes remaining.

With a place in the Junior Football Championship final at stake, the Dreen men recovered in time and a foul on their ever-reliable Shane Hasson was firmly punished when Andrew Hasson calmly stroked the resultant award between the posts to secure a 1-12 to 0-13 win for St Mary’s.

Rasharkin will take on last year’s beaten finalists St Comgall’s in the Junior  final this Sunday at Ahoghill (12.45pm).