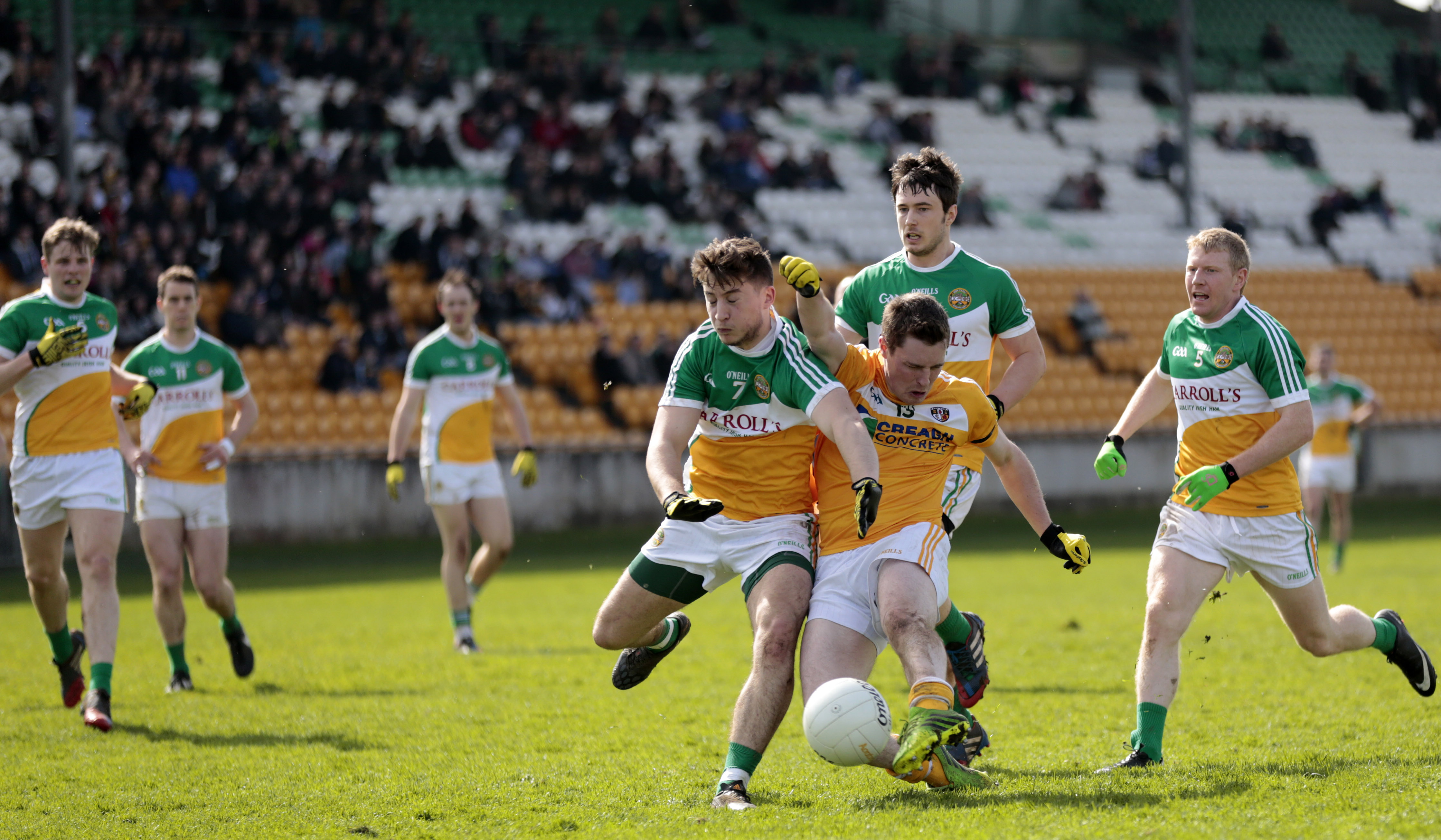 CJ McGourty is outnumbered by 7 to 1 as he goes for goal during the second-half of Sunday's NFL Division 4 game in Tullamore.

ANTIM’S hopes for promotion were extinguished at a sunny O’Connor Park in Tullamore yesterday as Offaly ran out six point winners to book a place in the Division Four final and more importantly, Division Three football for next year.
It was a below par display from the Saffrons who were slow to settle. They trailed by two points before they surged ahead when Tony Scullion released Conor McGourty who raced in on goal and fired to the net.
This was cancelled out immediately however, as Allen picked out Nigel Dunne who jinked inside and planted the ball high into the net to give his side a 1-2 to 1-0 lead.
Antrim were struggling to make an impression in attack although Ryan Murray had a half sight of goal, but his shot was smothered, while another two Allen scores at the other end made it a four point game.
The gap was back to two following frees from Michael Pollock and McGourty, while Nigel Dunne kicked a 45 at the other end after Graham Guilfoyle saw his shot at goal deflected out after a powerful run.
Antrim had a big appeal for a penalty in first half injury-time turned down when Offaly goalkeeper Alan Mulhall made an incredible stop with his feet when Matt Fitzpatrick had the goal at his mercy, but referee Liam Devenney ruled that it was a save and not a foot-block as the hosts went in at the break 1-5 to 1-2 ahead.
Pollock kicked a great point for Antrim after the break, but points from Dunne and Allen increased the Offaly lead to four.
Antrim began to creep back into the game with two McGourty frees and a great effort from Justin Crozier leaving the minimum in it.
However, Offaly always had an answer and William Mulhall split the posts and then added a free to make it 1-9 to 1-6 with 15 remaining.
That gap extended to six as Offaly pulled clear and this remained the difference at the end as Antrim saw Paddy McBride black carded late on and Conor McGourty issued a second yellow card to compound a frustrating day for Antrim.