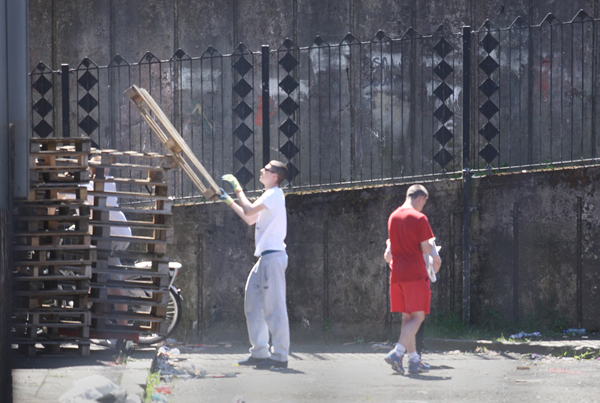 An upsurge in anti-social behaviour in Belfast has been linked to youths beginning to collect wood for the August 9 bonfire.
The notorious blaze on the New Lodge that has become synonymous with drug taking, underage drinking and anti-social behaviour has been subject to a crackdown in recent years. But the builders return each summer and have already started to prepare for this year’s event by stashing wood behind shops on the New Lodge Road.

Local Sinn Féin Councillor JJ Magee said there’s concern in the community that another bonfire is already being built.
“This is unwelcome and again residents are fearful about the bonfire because of the anti-social behaviour that is associated with it,” he said. “It is unproductive for the community and we would ask the bonfire builders to stop what they are doing and take on board the wishes of local people who do not want this. I would also ask the adults who are encouraging the young people to stop and work with the community to resolve this issue.”
Cllr Magee said he had been contacted by local people and had taken action himself to remove bonfire material.
“I removed 60 pallets because this isn’t wanted. It brings the community down.”
Attempts to prevent the bonfire being lit last year ultimately failed but through coordination with statutory agencies the quantity of material was reduced.

In 2013 a Housing Executive-organised survey found that 73 per cent of residents in the barrack area did not want the bonfire under any circumstances.
Already anti-social behaviour has increased in the area with a scooter burnt out on the North Queen Street steps and lights smashed at the Duncairn Centre for Culture and Arts.