Ballymacward children have experience of a lifetime 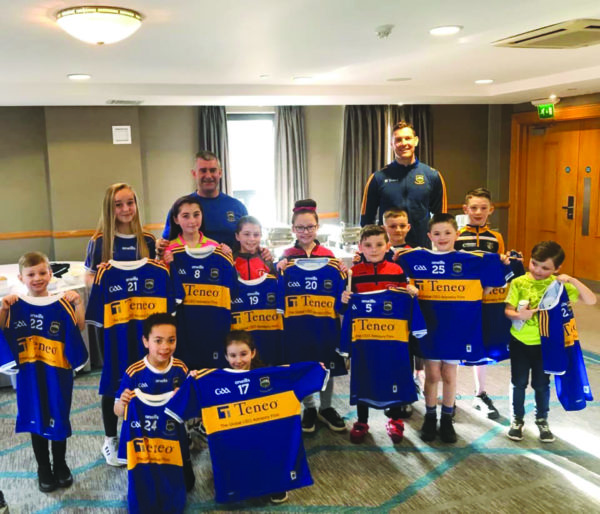 BALLYMACWARD principal Hugh Kennedy believes that his school children’s experience dispells the myth that you don’t meet your heroes.
Children from the small primary school on the Rock Road – not far from Hannahstown – were treated to an audience with the Tipperary hurlers on Saturday morning before the challenge game at Davitt’s.
The pre-arranged meeting was set-up through Micky McCullough who is working at the school and his links with Tipperary logistics manager Billy O’Shea.
The Ballymacward students – who ply their trade with Lámh Dhearg – were treated to breakfast with the Tipperary stars at the Ramada Hotel Shaws Bridge and left with a token of appreciation from the All-Ireland hurling champions as their principal explained.
“We were exceptionally proud when the opportunity came along through Mr McCullough who works with the school,” said Kennedy.
“He coaches Ballyboden St Enda’s and he had contact with Billy O’Shea and the Tipperary management team.
“It kind of all happened last minute. Mr McCullough asked if there was any chance the kids could meet the team.
“It was back and forward and the Tipperary management team had offered us the chance to come down in the morning and have breakfast with the players, meet them and get photos with the Liam MacCarthy, so we were delighted to accept that.
“We got there in the morning and it got even better. Billy O’Shea had said to us they had a token gesture for the children, which was jerseys that the team had worn during a match. He was actually quite embarrassed that they were worn jerseys but I said to him it made it even more special for the children and he said they would be presented to the children after breakfast.
“We were waiting in the lobby to go in and have breakfast with the players and they brought out the Liam MacCarthy.
“We were able to get photos with all the families and their parents and older siblings were able to get photos and Billy brought us in to meet the players.
“They couldn’t have been nicer, the hospitality was just second to none.
“There were a couple of children at each table and the Tipp players looked after them. They actually got the children their breakfast for them, brought them over pancakes and made them toast. You wouldn’t actually believe that those players are who they are!
“The day went really well and they couldn’t have done any more for the kids. At the end, Seamus Callanan and Liam Sheedy brought the children up one by one and presented them with a Tipperary jersey.
“It was a brilliant day and dispelled the myth that you don’t meet your heroes. They are exceptional people, all of them from the logistics manager, to the players to Liam Sheedy himself – they’re just exceptional people.”
The Tipperary stars were also treated to a rendition of the ‘Two Johnnies’ song ‘When I play for the County’ by young students.
Kennedy revealed that one of the children began singing it in school during the week and was encouraged by their heroes to sing a few verses despite their initial nervousness.
“It started during the week: they sang the song by the two Johnnies,” recalls Kennedy.
“I wasn’t aware of the song myself, it was one of the kids from Lámh Dhearg (Ruairi Mulholland) had been signing it in class all week and told us he was going to sing it for them.
“Ruairi was actually sitting at a table with Noel McGrath and a few others. The presentation was happening and a few of the players shouted up that the kids have a song for us.
“They got up and were a bit embarrassed at the start but they started singing the song about being a county player. They got confident and started singing away.
“They’d been practicing all week and the Tipperary fellas really enjoyed it and appreciated the kids singing for them and gave them a round of applause after.
“The kids were delighted, the players were delighted and Liam Sheedy himself was over the moon with it and we’re very, very proud of them.”
Kennedy was delighted with the publicity that his ‘small’ school of 79 children received over the weekend with Tipperary stars liking and retweeting them and Noel McGrath personally completing with the children.
“We’re a small school and have very strong ties with Lámh Dhearg,” Kennedy explained.
“All the children there yesterday were from Lámh Dhearg and we have one or two kids from St Pat’s, Lisburn but 95 per cent of our kids are all Lámh Dhearg.
“We’re a small school with 79 kids so they don’t really get much publicity.
“The whole day, meeting the Tipperary players and even on Twitter we had Tipperary players liking our tweets and retweeting.
“Noel McGrath in particular, contacted Mr McCullough afterwards to say how much of a credit the children were to the school.
“They all had Lámh Dhearg tops on and the players were chatting to them about their Gaelic club.
“They were a credit to the school, their club and their families.
“We’re a small school and we’re trying to expand as much as we can.
“It’s a good bit of publicity and it was just a great event all round for the school.”