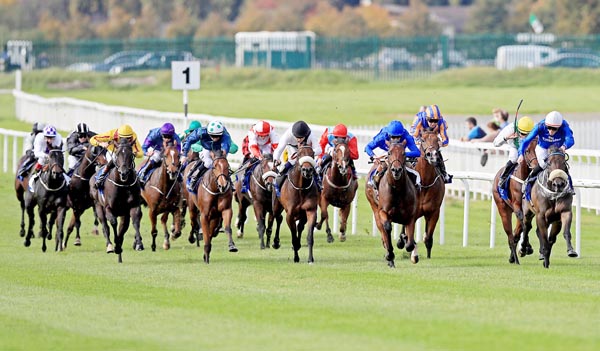 2000 Guineas hope: We are taking on the Aidan O’Brien hotpot, Churchill in Saturdays 2000 Guineas and are siding with the unbeaten Richard Hannon trained Barney Roy who is around 4/1 with Sean Graham Bookmakers

IT was winners galore last week for the PG as we hit six winners in last week's Andersonstown News and North Belfast Newa and countless winners on our Facebook and Twitter social media outlets where we delivered a 72/1 winning trixie on Thursday night along with 20/1, 19/1 and 9/1 doubles on Friday and Saturday.

It’s a small field set to go to post and by the time you read this, the field could be into single figures with 12 declared at the time of writing this.

One horse has scared most of the opposition away, the Aidan O’Brien-trained Churchill (13/8) who won six on the bounce last season including the Group One Dewhurst at Newmarket and the trainer reports him on tip-top form and ready for the assault on Saturday.

No bones about it, he looks the one they all have to pass to win this race and Sean Graham price him as their 13/8 early week favourite so expect that to become shorter come racetime on Saturday.

The only thing that puts us off that it’s his seasonal appearance and the price to be honest, so we are siding with the unbeaten Richard Hannon-trained Barney Roy (4/1) who could be anything after winning the Guineas trial at Newbury when easily taking the Group 3 LT Greenham Stakes and if he steps up on Saturday, then he could go close.

On to the mares on Sunday and again, Aidan O’Brien is responsible for the favourite in this one with Rhododendron the midweek 5/2 favourite with Sean Graham. Again, she holds the key form after winning the Group Dubai Fillies' Mile at Newmarket at the backend of last season and again, the Ballydoyle trainer is happy with her preparation for her seasonal reappearance.

Again, maybe at our peril, we look elsewhere and the John Gosden-trained Daban (7/1) looked a exciting prospect when taking the Lanwades Stud Nell Gwyn Stakes on his second racecourse start at Newmarket, so could be the dark horse.

Frankel off-spring Fair Eva (8/1) looked the classic type when bolting up in her first two starts, but the bubble burst when finishing third at York and then second in a Group 2 at Newmarket. If she has trained on then she could well be in the mix come Sunday.

A high class meeting at Newmarket at the weekend means a high quality flat racing and on Saturday we have the Jockey Club Stakes (2.55). Seventh Heaven (2/1) looks the cut above in this and should deliver a win for the Ballydoyle stable after a brilliant second in Meydan in March.

We have the first bi sprint race of the season with the Palace House Stakes (2.20) and we are taking Profitable (5/1) to follow up on last year’s win. He won the first three races of last seasons and the Clive Cox-trained horse goes well fresh which could be vital in this race.

The Micahel Stoute-trained Ballet Concerto (6/1) missed an engagement at Sandown last week and could turn up for the Spring Lodge Stakes (1.50) in the opening race on Saturday.

On Sunday we have the Dahlia Stakes (2.20) and we are taking on the favourite, Somewhere with the consistent Muffri'Ha (4/1) who can strike for the Willie Haggas yard.

Just time to draw breath after the Guineas weekend and it’s off to Chester for a three-day televised meeting. The early signs for us in the Cup on Wednesday is Winning Story (11/1) who won the Marathon at the Lingfield all-weather Championships in early April and could follow up in the big race of the week.

The PG are online on Facebook and Twitter all day, everyday with free bets, competitions, selections and local betting stories of joy and despair. Check us out and give us a follow this weekend.

Get Studying those League tables this week

As we said last week, it’s that time of the year so it’s essential you get the league tables out and get studying as we reach that stage of the season where some teams are already on the beach and some teams have championships, promotions and play-off places on their minds as we have the last round of games in the Championship and League 2.

PG QUAD: We start in the Championship and all games have Sunday noon kick-offs. The play-off places are known but the league title and relegation places still have to be worked out. We start at the bottom and if Birmingham (13/8) can win at ‘safe’ Bristol City then Harry would have done a ‘Houdini’ act while Blackburn (8/5) will need to better Nottingham Forest’s result and score to survive as they travel to Brentford who are hopefully already on the beach.

Back to League 2 on Saturday night and Carlisle (6/4) need to win at Exeter who insured their play-off spot last week to join them in the play-offs while Doncaster (1/1) need to win at Hartlepool and hope Plymouth mess up at Grimbsy to win the title. Big quad there and hopefully we get at least a sweat.

PG ACCA: On to the weekend odds-on bet and the following teams all badly need wins on the board for various reason this weekend so we suggest wins for Newcastle (1/3) who could win the Championship if Brighton slip up at Aston Villa when they host Barnsley, while Hull (1/2) could take a huge step towards Premier League safety with a win over relegated Sunderland.

Liverpool (4/7) can keep up their Champions League aspirations with a win over Southampton at Anfield while Leicester (4/6) can take all points against Watford.

Making the odds-on acca up are Portsmouth (2/5) who could still win the League title if Doncaster and Plymouth mess up on the last day when they host Cheltenham.

PG DRAW TRIXIE: On to weekend draw trixie and we sit on the fence in the following games: Sheffield Wednesday v Fulham; Stenhousemuir v Brechin and finishing with the Queen of South v Dunfermline game.

As usual, keep a close eye on the Sean Graham’s in-house screens for enhancements on all PG weekend soccer bets - stay lucky.