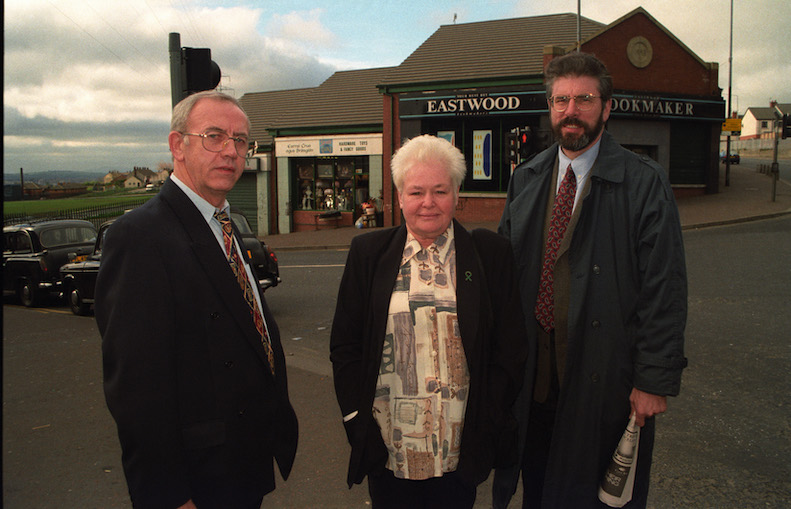 AS YOU WERE: Pictured in 1997 welcoming new traffic lights at the top of the Rock were Jim Neeson, the late Sinn Féin councillor Marie Moore and Gerry Adams

Tributes have been paid to visionary community leader Jim Neeson who has passed away on Tuesday following a long battle with cancer.

Although raised in Hannahstown on the outskirts of the city, Jim lived much of his life in Lenadoon and was very much a West Belfast man.

The 79-year-old was one of the key figures who pioneered the revolutionary Black Taxi transport system, steering the West Belfast Taxi Association through some of the darkest days of the conflict and into modern-day success at its new headquarters in King  Street.

As chairperson of the Conway Mill, he was instrumental in securing the redevelopment of the mill where he helped the local community and business sector to flourish despite official opposition from the British government.

A dedicated republican and political activist, he had travelled throughout the world, forging strong links with people in other countries such as Australia, where he helped promote the cause of Ireland and workers rights.

Paying tribute, West Belfast MP Paul Maskey described how “no challenge was too big” for Jim.

“Jim was a person who was not only liked, respected and admired in West Belfast, it went much beyond that,” the Sinn Féin representative said.

He was the type of person who was always willing to help people and no challenge was ever too big for him.

“He was instrumental in the Black Taxis. The current building they are in in King Street wouldn’t have been built without Jim’s push and drive.

“He was also instrumental in the Conway Mill, where he faced many challenges. There was a backlash from the British government where it tried to oppose anything going into areas like West Belfast, including Conway Mill. But Jim made sure that they cut through all the nonsense that was thrown at them. They had a focus, they had a vision and they ensured that was delivered.”

He continued: “He would’ve went out to Australia to speak to the diaspora out there to make sure that the message from Ireland was heard. He worked along with trade unions to work on initiative that would benefit Ireland in terms of workers, employment rights, and anti-sectarian issues.”

Mr Maskey told how, despite Jim’s battle with cancer, he remained upbeat in what would be his latter days.

“When I met him in the Kennedy Centre a few months ago, he was clearly more frail than he would normally would be, but his spirits were very high, he was very positive in the conversation we had – that was the measure of the man,” he said.

“Even though he was sick and ill, he was very positive in his outlook.”

Group editor of Belfast Media, Robin Livingstone, who as a reporter worked for years with Jim on countless black taxi-related stories, said Jim was a shining example of how the West Belfast community looked after itself in the face of official hostility throughout the Troubles.

"Jim was quiet and fairly undemonstrative – he was a guy who was interested in how to get things done rather than in backslapping and glad-handing," he said. "Any time I went down to see him – and I don't think there's another person I worked with more closely in my career for so long – he always had a strong idea of what he needed to go in the paper and what he wanted to happen. Not surprisingly we got to know each other very well and I came to value his mischievous sense of humour which revealed itself more over time. I came to see that he had a lot of insightful and funny things to say about a lot of things and a lot of people. He will come to be remembered as a key element in the strong community infrastructure that saw us through the worst years of the conflict. My condolences to his family, who I hope will take tremendous comfort at this difficult time in the knowledge that Jim's was a life well and productively lived."

Briege Brownlee, a long-time colleague of Jim’s at the West Belfast Taxi Association, described him as “an absolute gentleman.”

“He was professional in every way,” she said.

“He dealt with all sorts of people, and he treated them all in the same way, whether it was the government or the bin men – he was that type of person.

“He built the West Taxi Association almost singlehandedly. He had other people working with him, but he was the brains behind the new development in King’s Street.

“He travelled everywhere, and did things that people maybe don’t know about, in terms of promoting truth, justice and civil rights. He was well known in Australia for the work he did there. He’s known the length and breadth of Ireland for the work he did to help people.”

John Gawned, Chairman of The Casement Group, Melbourne, said: “It is with a heavy heart we mourn the passing of our dearest comrade and friend.

Two blows. I can't tell you the number of stories I did (when I was a real journalist and not a desk jockey) with black taxi boss Jim Neeson. A true gentleman. Jonathan Bardon I also had the privilege to know. Did anyone carry their learning more lightly or elegantly? Big losses.

“We send our deepest condolences to Joan and the family on the loss of their beloved Jim.

“Jim was our patron for 32 years, a true Irish Patriot. He will be sadly missed.”

Jim was the beloved husband of Joan, much-loved father of Catherine, Brendan, Sharon and Philip and a loving granda to his grandchildren and great-grandchildren. Due to current circumstances, Jim's funeral will be strictly private.

Sorry to hear the news of Jim Neeson’s passing, a fine Republican man until the very end. Had to fight with every authority going for a lifetime to keep Community Public transport going in West & North Belfast. Was good to me for well over 20 years.
Rest in Peace Jim X 🇮🇪✊