Black taxis still at the hearts of the people 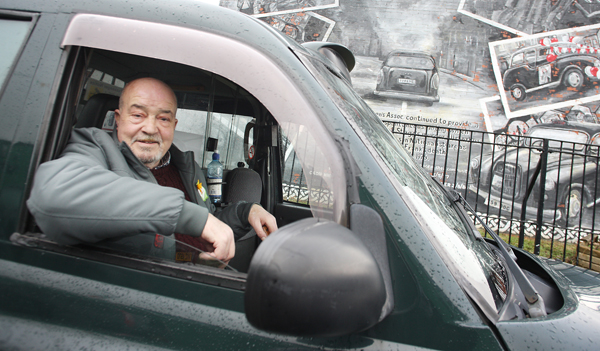 Sam Baker onboard an Ardoyne Taxi

IT would be fair to say that the men and women who served their community during the Troubles as drivers in the West Belfast Taxi Association (WBTA) are some of the unsung heroes of their time.
The WBTA - more commonly known as the black taxis - was founded in the early 1970s as the bloody conflict that would define the next few decades had just broken out.
The unique public transport system sprung up at a time when public buses would rarely enter places like Ardoyne, Twinbrook, Andersonstown, or the Falls. Despite the political and social upheaval during that period, life went on in many ways: people still had to get to work, to go for groceries, or even to get into town for a pint, and it was in this context that ordinary people founded the WBTA.
As a symbol of community endeavour, and as a representation of Belfast’s republican community in general, the black taxis were often targeted by loyalist paramilitaries, the RUC and the British army.
Eight men were murdered while working for the WBTA and countless others from the association were attacked, harassed and brutalised as they tried to earn living.
A plaque dedicated to the memory of Michael Duggan, Harry Muldoon, Patsy McAllister, Caoimhín Mac Brádaigh, Thomas Hughes, Hugh Magee, Padraig Ó Cleirigh, and Jim Green can be found in the black taxi depot on King Street.
Ardoyne man Sam Baker began working as a black taxi driver in 1984, and can acutely recall many of the killings, and vividly describes the night when his own taxi was attacked by a loyalist gunman.
“It was very bad time,” he said. “I remember some of the killings like they were yesterday. Hugh Magee was murdered at the top of Rosapenna Street, which is just around the corner from my house. In those days we would have tried to drive straight through that junction there without slowing down, but sometimes it wasn’t possible if there was another car coming. Hugh just happened to slow down when he was shot. North Belfast was particularly bad because we’re living on an interface.”
He continued: “Nearly 30 years ago my taxi was shot at near Carrick Hill. It was about eight o’clock at night and I had stopped at the traffic lights. There was somebody hiding in some bushes at the bottom of the Shankill Road with a rifle. As soon as I heard the shots I drove off, but there was a lot of screaming in the back of the taxi because somebody was shot.
“A girl was shot in through the cheek and she is still getting operations done today. There had been more people shot that night, and we were very lucky that nobody was killed. Myself and the person sitting in the front were very lucky not to be killed. The guy was shooting because he knew there were Catholics. It happened to a lot of other people.”
While Sam and other drivers were under constant threat, nevertheless they felt obligated to ensure people from their community got home safely.
“We would take it in turns to stay in the city centre late at night to make sure people got home,” he said.
“We would sit on Castle Street on our own, sometimes until one o’clock in the morning, because people had no other way of getting home. There were drivers out from about six in the morning making sure people got to work safely too. If anyone had wanted to attack us at that time, we were beaten.
“The Brits and the police would always give us a bit of hassle too, but you tried not to let it annoy you. In those days we tried not to think about the bad things, otherwise we wouldn’t have gone out to work. It was a good laugh at times too, but there was a lot of heartache.”
The perseverance of the members of the WBTA has ensured the survival of the black taxi service. They are still seen by many as the quickest, cheapest and most reliable form of public transport in North and West Belfast, but Sam says that they need the support of the community to survive.
“I’m retired now, but I still use the black taxis even though I have a bus pass,” he said.
“I think some people have short memories, and they won’t use the black taxis. Only for the black taxis people wouldn’t have got home during the Troubles, and I think some people forget that. When I look around me and I think it’s sad to see some people refusing to use black taxis.
“I can’t see them going out of fashion, but sometimes it can be hard for drivers to earn a living. The fares are still very cheap and you’ll always get a good laugh in a black taxi and I’m glad to see that many people still use them.”
He added: “Some of the drivers have been there since the seventies or eighties, and I’m very glad that the drivers today don’t have to go through what we did back then.
“I never thought that these times would have come for us or for the community.”