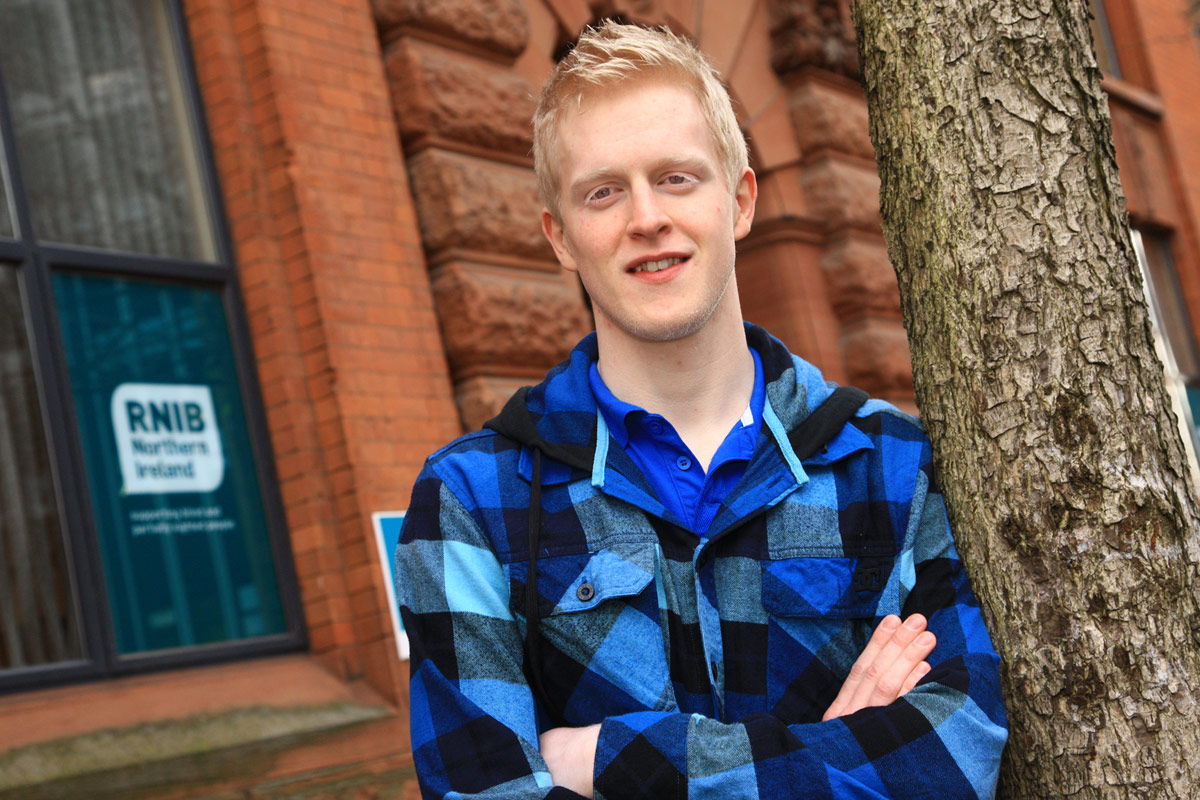 Twenty-five year-old Ormeau resident Niall Dempsey is a youth worker for the RNIB in Northern Ireland which helps blind and partially-sighted young people enjoy independent and fulfilling lives. Partially-sighted himself, Niall helps arrange a huge variety of activities and projects for the charity.

I was born in... Ballymena Hospital about two months ahead of schedule; I guess patience isn't my strong point

I grew up in... Aghadowey, near Coleraine

I now live... on the Ormeau Road

I was educated at... Queen's University and the University of Ulster at Jordanstown

My earliest memory is... my brother setting me in the middle of his toy train track and becoming upset when I tried to crawl over it

When I was a child I wanted to be... taller, all the sweets at home were on high shelves. As a job though I wanted to be an Italian footballer so I could play for Italy with Roberto Baggio

I actually became... a youth worker but there's time yet for the big move to Inter Milan

Worst job you've ever had... I've never had a really bad job but some breakfast shifts as a waiter after a night out weren't fun

Best job you've ever had... youth worker for the RNIB; you have to love a job that as it involves coaching football, taking groups cycling in Holland and going to outdoor centres all the time

The stupidest thing I've ever done... spent half an hour looking for a pair of jeans I was wearing

The biggest thing I've yet to do... run a marathon in under three and a half hours and then I would quit running for the rest of my life

The person/people who inspired me most is/are... anyone who says I can't do something usually inspires me to try and prove them wrong

The most important thing in the world is... having a sense of humour

I'm very bad at... getting up early in the morning and remembering where I've left my phone/wallet/keys or anything else important

I'm very good at... making people laugh; it's not always intentional but it does happen a lot

I'm most proud of... watching the young people I work with achieve the things they set out to do and become more confident people

My best friend would say I... have a massive ego and can be very moody on a football pitch, if he said something nice about me I'd think there was something wrong with him

I like to relax by... listening to music or watching some kind of comedy on TV, anything that doesn't make me think is relaxing to me

My favourite saying/quote is... "Just as the highest and the lowest notes are equally inaudible, so perhaps, is the greatest sense and the greatest nonsense equally unintelligible".  This is my defence for all the stupid things I say

The last book I read was... ‘Making Money’ by Terry Pratchett

My favourite movie is... this changes a lot but the first one into my head is ‘Withnail and I’, although as it's nearly Christmas you can't beat the Muppets Christmas Carol

The actor that would play me in a movie of my life would be... really struggling for work

The song that makes me dance is... I can't dance to save my life and there's no song out there that can fix that problem

The song I would have played at my funeral would be.. ‘Alive’ by Pearl Jam, and hopefully some people would see the funny side of the choice

The best place I've ever been... Texas, the people were really friendly and the food was great, I'd like to go back now that I'm older than 21

The place I have to visit before I die is..  Italy. I'd go and watch Inter play at the San Siro and then head south for the better weather and nice food

The last text message I received was from... a friend of mine sending me a joke about Sepp Blatter which I don't think I can share in this paper

I was a politician I would... make it illegal to put up Christmas decorations until the first of December each year

If I won the lottery I would... probably drop the ticket somewhere but if I managed to hold onto it I would go travelling and then come back to the fun parts of my job and pay someone else to do all my admin work

If I could describe myself in five words they would be... funny, impulsive, stubborn, competitive and active

If I could invite five people (living or dead) to a dinner party they would be... Derren Brown, Dylan Moran and John Frusciante, Olivia Wilde - I don't think that needs much explanation, and finally the chef from Mario's Pizza so the food’s taken care of

If I could change one thing about South Belfast it would be... more cycle paths, as it's a great way to travel but I don't think motorists are big fans of bikes on the road

My favourite thing about South Belfast is... the fact I'm near everything I need: shops, pubs, train station and football pitches but being from the country I'm impressed to have anything within two miles of my house