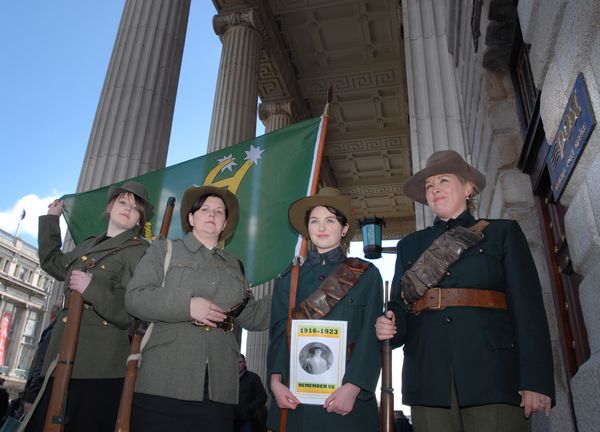 AIRBRUSHED OUT: In 2008, women gathered at the GP in Dublin in the uniform of Cumann na mBan to demand a proper memorial to the 'Forgotten Women of 1916, The Tan War and the Civil War'. Rollingnews.ie

There has been much lively and sometimes controversial discussion in this decade of centenaries about who and what should we commemorate. It will come as no surprise to you that women’s contribution and experience has remained largely invisible.

Most of us will have heard of well known figures such as Constance Markievicz and Maud Gonne, both well educated, Anglo-Irish stock. But few of us know of the experiences and the her/history of the thousands of women, many of them domestic servants, trade unionists and farmers who were actively involved in the events of those turbulent times.

The recent publication of Women and the Irish Revolution tackles this gap in the important story of the early part of the 20th century. Linda Connolly, who has edited this collection of essays, comments that “the story of women is the story of the revolution in equal measure”.

The book covers the period after the Easter Rising, the War of Independence and the Civil War from 1917-1923 and has contributions from 12 academic authors. The digital release of documents from the Military Service Pension Collection (1924-1958) and the Bureau of Military History forms the backbone of this collection of essays.

Women were only eligible to apply for a pension, based on their military service, after 1934, following pressure exerted by those women who were understandably aggrieved by their exclusion. The digital archive is easily accessible on line and makes interesting reading, particularly if you have relatives who were active during this period.

The progress of women’s rights has been slow since these times. Women’s participation in civil society was rolled back after the Civil War ended in 1923, a bitter pill for the first wave feminists within Cumann na mBan.

The relationship between women’s liberation and national liberation has always been a complicated one. The period leading up to 1916 saw the mobilisation of thousands of women, of many political hues, campaigning for the vote. Louie Bennett, a suffragist and trade unionist, commented in 1914 that “It is not possible for the women of Ireland any longer to accept things as they are, or to leave the welfare of their country, their people and their children to the care of men”.

However,the stories that have come down to us tend to favour those women who were middle class and literate. This book goes some way to counteracting this narrative.
During the Irish revolution, many men felt that women’s rights would automatically follow and that women would return to the domestic sphere when national liberation was achieved.

The book demonstrates that, far from retiring to the home, women’s participation in organisations, especially Cumann na mBan, increased during the War of Independence with over 20,000 members in 1921. Their role also broadened to include active service as well as the crucial transportation of arms and communications.

The price women paid for this activism is revealed in a number of these essays. Women were essentially trapped in their homes as going ‘on the run’ was not an option given their childcare and other domestic responsibilities.  Sexual violence including rape, sexual assault and the practice of ‘bobbing' or cutting off women’s hair was used, mainly by the British forces, the infamous Black and Tans and the RIC, but also, on occasions by Free State soldiers and the IRA.

Women, nationalist and loyalist, were reluctant to report these crimes because, then as now, justice was rarely meted out to the perpetrators. Additionally, it was considered a slight on a woman’s reputation to make these incidences public. The authors comment that this part of our her/history has been regarded as shameful and not part of the heroic narrative our the national liberation struggle.

Margaret Ward contributes an interesting chapter on the Belfast branch of Cumann na mBan which was very active up until the brutal pogroms of the 1920’s. There is little information about the activities of women in Belfast as they appear to be underrepresented in the Military Services Pension collection.

Cumann na mBan were solidly anti-treaty and, in Belfast, in particular, many women would not have applied for a pension, opposed as they were to the Free State government. Indeed, only one of my own great aunts, who were involved at this time, applied for the pension.

The accounts by the men who were active during this period did not think to mention the names of those women who transported arms, facilitated prison visits and ran ‘safe houses’.

Another chapter gives an account of the relationship between female prisoners. Ex prisoners may  recognise the challenge of sharing incarceration with those who share political affiliation but not necessarily domestic habits. Kathleen Clarke reveals in her memoir that she had to bar Constance Markievicz from her cell after she persisted in flicking cigarette ash onto her bed!

It seems a pity that this book missed the opportunity to record the contribution made by lesbian women in this period despite the historic evidence of their participation.

The progress of women’s rights has been slow since these times. Women’s participation in civil society was rolled back after the Civil War ended in 1923, a bitter pill for the first wave feminists within Cumann na mBan.

It would not be until 1977 that the number of women TDs would exceed the number elected in 1922. Many would argue that partition facilitated the control of Irish society by the Christian churches, male domination and the prioritisation of heroic remembrance over forgotten and marginalised women.

The idealisation of women as guardians of the family and sexual morality has come down through the generations and harsh treatment was meted out to those women who breached this ideal. The book concludes with the absence of commemoration for the victims of the Mother and Baby homes and the Magdalene laundries.

Indeed, a chilling reminder that the Irish revolution remains unfinished!