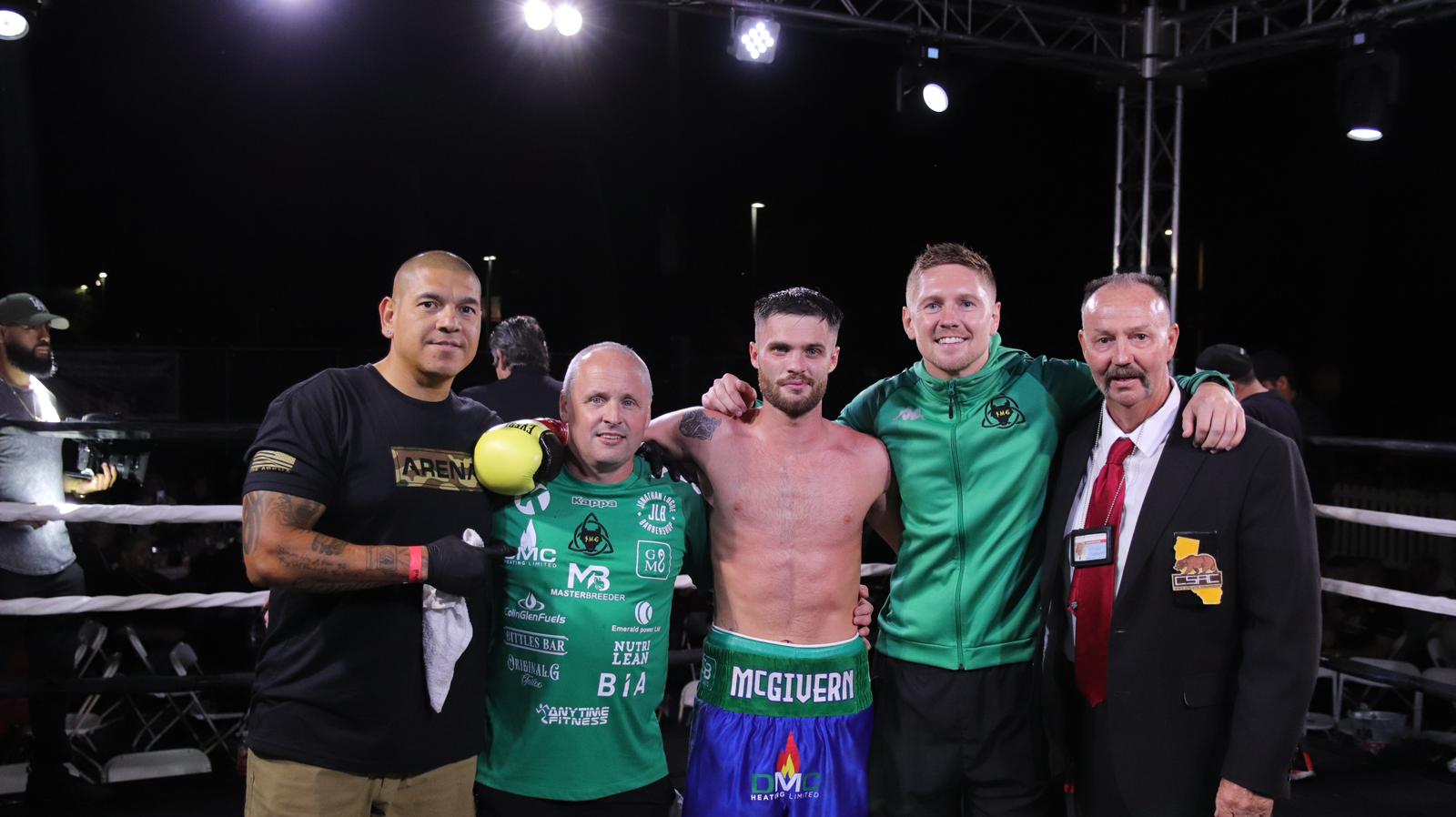 James McGivern and his team after Saturday's win

James McGivern recorded his first KO as a professional on his Stateside debut Saturday night in California.

The Irish lightweight extended his unbeaten record to 5-0 with a fifth-round stoppage of durable Mexican Luis Montellano at the Kid Gloves Gym in Simi Valley, California.

Fighting in the United States for the first time in the pro ranks, the Belfast southpaw was dominant across the opening four rounds.

Montellano, who hadn’t been stopped in his 15 fights, was rocked by ‘The Natural’ a couple of times and, two minutes and ten seconds into the fifth of the six scheduled rounds, the bout was over.

“It’s nice to get him out of there,” McGivern said.

“This has been a whole new experience for me. From the get-go here, it has been a real learning experience. Your man was tough, but I felt pretty good. That was pretty good, but it’s still not me at my best."

McGivern walked the ring to Oasis’ Rock N Roll Star for his first bout under the Sheer Sports banner.

The 2018 Commonwealth Games bronze medalist was through the ropes competitively for the first time since his November, 2021 win over Rustem Fatkhullin at the Ulster Hall.

He said: “To be honest, I thought it was going to be over in the first round. He was wobbled but, to be fair to him, he weathered the storm. I’ve been working a lot on things since I came over here.

“From my amateur days, I’ve been fighting very high-paced, but we’ve done some work on fighting calmer and slower and throwing more shots with a bit of venom. It wasn’t at 100 percent, but I’m delighted with that night’s work.”

The 24-year-old wants to get another bout under his belt before the end of 2022.

He said: “We have spoken about this already and I want something now before Santa comes. I’ll get home, get straight back to the gym and build on this.”

McGivern is the newest Irish recruit for the Los Angeles-based Sheer Sports Management. He had 2021 WBO World middleweight challenger and Sheer Sports stablemate Jason Quigley in his corner alongside his father and trainer, Jim McGivern.

Quigley said: “This has been a great learning experience for James. He has had a long wait since last November and had a couple of fights that fell through. He got his reward - and it was well deserved - with a win on his American debut.

“I’m so happy to have been here with James and his dad. The set-up here in America is a lot different. Even being here and getting into the gyms, being around the Commission and seeing everything that happens before a fight here will stand to James now.

“I have a lot of faith in James and he can go the whole way to the top. If the opportunity for a fight here comes again in the near future, all James will have to concentrate on is getting in there and taking care of business.

“We came here two weeks ago and we started working on two or three simple things that we’d like to add to James’s armory. One was getting James to sit down on his shots, relax his feet and throw those power punches. I was very impressed with the way that he adapted.”