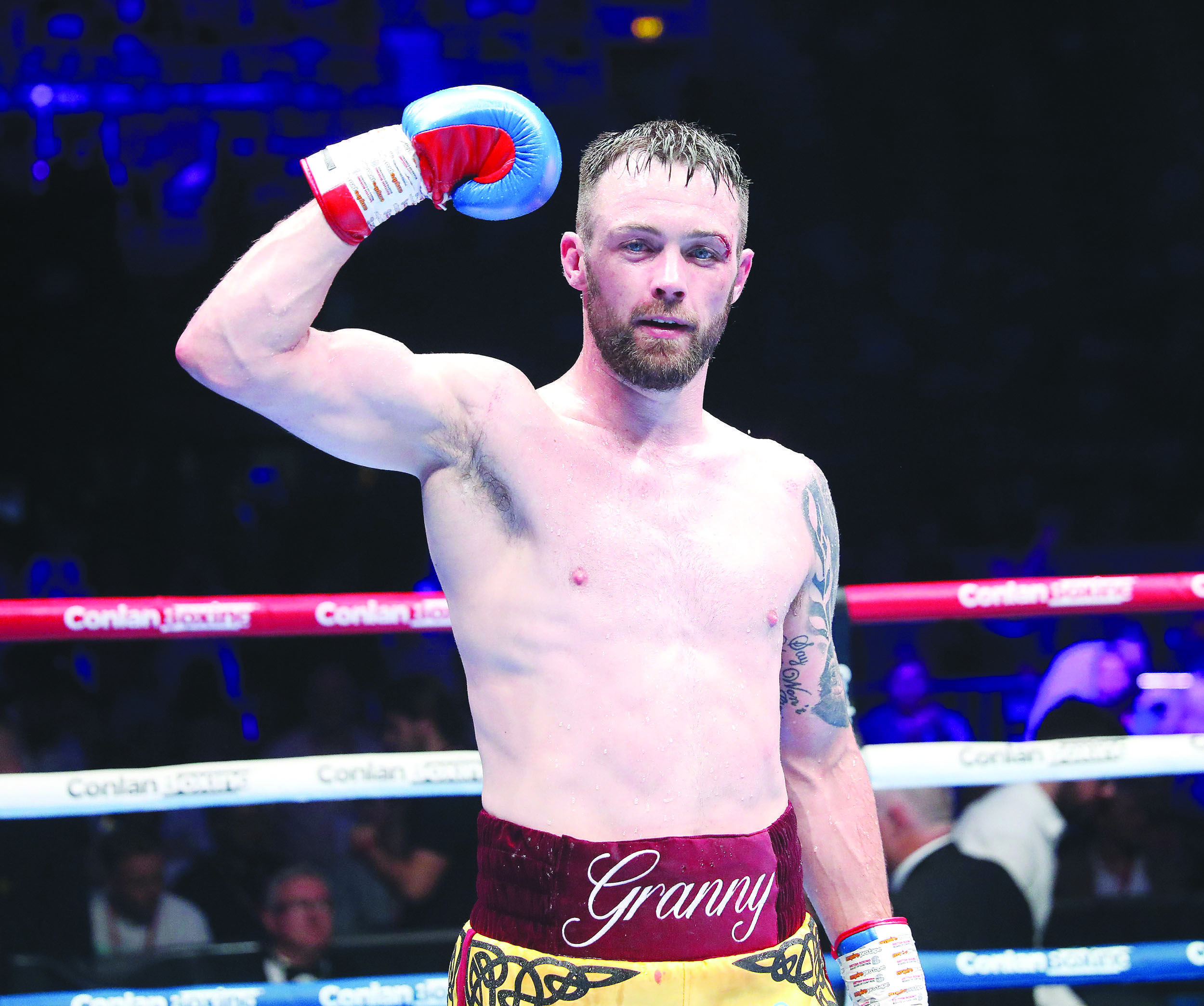 “I’m ecstatic. I have only been training for three and a half weeks. I was sitting drunk on New Year’s Day and I thought to myself: ‘Listen, this is your last chance to give it a go.’ I did that and it paid off.”
Padraig McCrory speaking on January 31, 2014

ON the final day of January in 2014, a raucous crowd in the Europa Hotel had just witnessed Padraig McCrory edge Sean McGlinchey to claim the Ulster Elite light-heavyweight title.

As he left the ring with the McAlinden Cup in hand, he sunk down on a chair to try and process just what he had achieved as friends and family clambered to offer their congratulations.

It was like something from a Hollywood script as the affable St James’ man’s decision to return to the ring after four years away was vindicated and then some. But little did he or any of us know, it was simply the opening credits.

McCrory may have missed out on that summer’s Commonwealth Games after losing out to McGlinchey in a box-off for a place on the team, but he would win the rubber match four years later when both had transitioned to the professional code.

That was his fifth in the paid ranks and nine further victories have opened the door to Saturday’s IBO light-heavyweight title fight against Leon Bunn in Frankfurt - a scenario that nobody would have envisaged back on that Friday night back in 2014.

“I saw in the local paper that the weigh-ins for the Ulster Elites were coming up in three and a half weeks,” recalled the 34-year-old as he made the final adjustments before departing for Frankfurt this week.

“I’d been out of boxing for four years and just decided to take the chance and from then it snowballed to now here I’m days away from fighting for an IBO world title.”

If that victory was remarkable, it was also an indication of just how talented McCrory was and he added at the time that if this was him on three weeks’ training, just how good could he be with 33?

He grabbed his chance with both hands and since making the switch to professional boxing, had taken every one since.

A highlight-reel KO of Manny Bique at The Devenish in February 2018 went viral, drawing praise from none other than former undisputed heavyweight king Lennox Lewis. That opened doors and brought opportunities but it was up to him to deliver.

He did so at the Falls Park against Steve Collins Jr in a fight many regarded as 50/50 before the opening bell, again at the same venue two years later when the odds were against, breaking the heart and stopping Russia’s Sergei Gorokhov and most recently against Marco Antonio Periban at the SSE Arena in August.

He was actually due to face EU champion Gustave Tamba at his more natural super-middleweight this weekend, but opportunity knocked.

“I’m only 14 fights in and have worked my way up to get this opportunity,” said the West Belfast man, labelled the “typical working-class hero” by his manager, Jamie Conlan.

“People weren’t expecting very much from me, but deep down I knew I had the ability. It was just about applying myself which I have done really well over the past four and a half years.

“I’ve always said I’m riding the wave and during my last fight (against Periban) Jamel Herring (on co-commentary) was critical of that mindset.

“But then I saw a column by Carl Frampton - my idol in boxing as he’s a local lad who conquered the world - saying it’s worked so far and a good attitude to have, so ride the wave and see how far it can go.

“I don’t know where this ends, but I may be one or two away from a mega fight against a superstar and that’s the reality.

“Five weeks ago I had the option of fighting for a European (EU) title or an IBO world title. This is something fighters who were better than me back in the amateurs have never got close. I’ve persevered and think I have performed every time I’ve stepped in the ring to put me in a very strong position.”

There was no fanfare as he entered the punch-for-pay ranks, no major promoter banging the drum or primetime TV slots.

Instead, he was a ticket seller, a fighter who gets the chance to fight on small hall cards because he can bring a crowd - mainly those same friends and family who roared him to victory.

Exciting fighters draw fans and McCory is absolutely in that bracket, but with an everyman personality that has won over the Belfast boxing public who have rallied behind him ahead of Saturday’s mission to upset Bunn in his home town, with many making the trip to roar him onto even greater heights.

“I’m bringing a lot of people over and get a bit emotional even thinking about that as I’m bringing so many to a foreign country to fight for a world title,” he continued.

“That was unthinkable four and a half years ago, so it’s massive. But I don’t see this as the end goal. I feel like I can win this fight and push on again.”

It’s another roll of the dice as he steps up in weight to face Bunn who is four years his junior, but has had four more professional contests of which nine of those 18 he has won inside the distance.

The German is a solid, technical fighter with a tight defence, good movement and he can put his shots together in spurts.

Although McCrory is known for his ferocious power that has seen him take a run of recent opponents apart, his boxing acumen is not to be sniffed at and under the tutelage of friend, neighbour and former amateur team-mate Dee Walsh, a plan will be in place.

Despite the jump up in weight, McCrory may actually hold the physical advantages with the German not exactly massive at the weight.

“When I was given the name and looked into him, I noticed he weighed in at 170lbs a couple of fights ago, which isn’t much (two pounds) off the super-middleweight division,” McCrory noted.

“He’s not a massive light-heavyweight, so I know I’m not fighting a monster at the weight like a (Joshua) Buatsi or (Anthony) Yarde and there won’t be a massive size disadvantage.

“I’m a big super-middleweight and have shown I can punch at that weight, so let’s hope the extra seven pounds will carry through in terms of strength and power. If it does, it will be a very exciting fight.

“He is from the same gym as Arthur Abraham and has a similar style without the power. Abraham had a hammer of a jab, whereas he (Bunn) is more about a high output. He seems to be fairly good at everything, puts his punches together well and can move, but I don’t think he is amazing at any one thing.

“He will be tough to hit clean but leaves openings as he throws in bunches to set up shots. I’ve worked on different options and plans to nullify what he does and it’s up to me to put in place what we’ve worked on.”

Germany may have previously held a reputation of being a place where an away fighter needed a knockout to gain a draw, but it seems the UK has that unwanted crown after some high-profile scoring controversies.

Still, taking on the home fighter on their promoter’s show - in this case, Kalle and Nisse Sauerland’s

Wasserman Boxing - makes the task that little more difficult as no favours can be expected.

But McCrory’s fists have rendered the judges mere spectators in his last five outings and with the power he has, there is no doubt he can increase that to five on Saturday and is quietly confident he will win this weekend in conclusive fashion.

“I know Germany has had that reputation where they don’t like people coming in and leaving with a world title, so I’m going there with the mindset that if I’m going to win this fight I’m going to have to win it well, but I think I can do that.”

McCrory has been riding the crest of a wave since that winter night in 2014 when he decided to become the master of his own destiny. He has had to fight for everything he has got, take chances and find a way. Saturday is just another chapter in that story, but he believes there is more to be written.