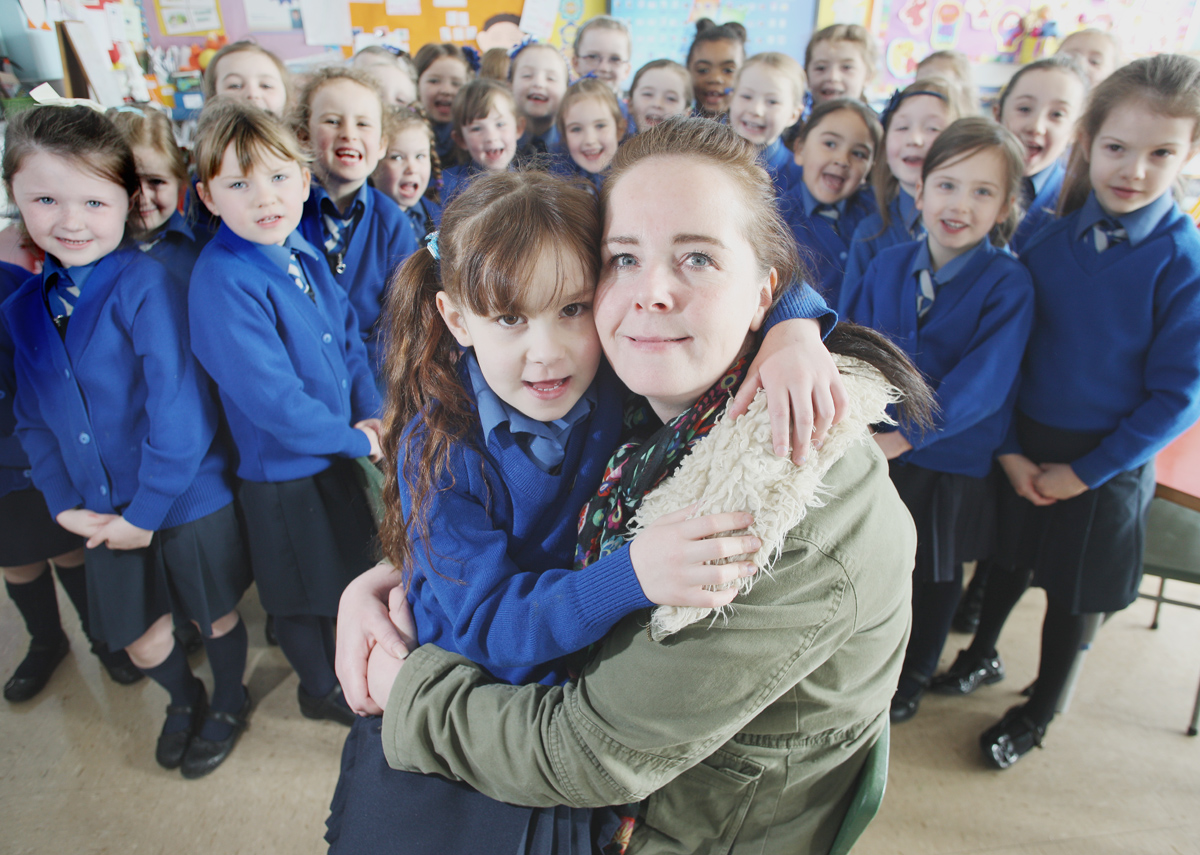 The mother of a seven-year-old North Belfast schoolgirl has described her daughter as a “warrior” as she recovers from her third major heart operation.

The corridors of Mercy Primary School were filled with laughs and smiles as Primary Two pupil Holly McDowell returned to class just a month after undergoing open-heart surgery in Birmingham.

The Oldpark girl, who was born with hypoplastic left heart syndrome, was given just a fortnight’s notice to travel to Birmingham in February for her third and most important surgery to date.

Despite the operation being declared a success, a complication with Holly’s oxygen levels meant that she had to undergo another procedure a week later and her family were told that it could take up to two years before seeing an improvement. However, just over a month later Holly’s mother Hannah said Holly has exceeded expectations and had been begging to go back to school. “She has all this extra energy now and she wants to do things that she was never able to do,” said Hannah. “Before, Holly couldn’t have joined her friends on the playground if it was cold and when she did she couldn’t keep up with them. They’ll be struggling to keep up with her now. Holly has had heart problems from birth and as she got older we noticed her slowing down, she couldn’t walk as far and she couldn’t join in with the other children at playtime because she would tire so easily. The last few months have been difficult. On one hand when we got the date to go to Birmingham we knew it would be the best thing for Holly but we also had the worry to contend with. She’s been a real warrior.”

While in Birmingham, Holly’s classmates regularly sent her videos of support and even raised over £500 for local charity the Heartbeat Trust in her name.

“The school have been fantastic and I owe them a great deal of gratitude for the support they have shown myself and Holly. When she went back in for her first day on Wednesday her class greeted her with hugs and smiles and as a parent there is no better feeling Holly’s heart has been through a lot but still there is a lot of room for all the love she has been shown. I want to thank everyone, especially Mercy Primary School for making sure that Holly has never felt different and can now thrive alongside her friends.”