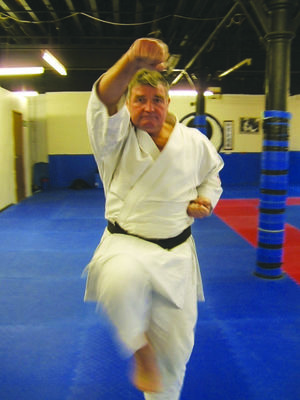 Oliver Brunton is set to host a special seminar

KARATE enthusiasts throughout Ireland are eagerly anticipating a special four-day seminar with Irish karate ace Oliver Brunton next month.
The lockdown period starved many of the opportunity to train with one of the world’s most skilled practitioners of the wado style of karate and the demand for Oliver’s instruction has risen dramatically.
Oliver has studied this ancient art for almost 60 years and is well placed to guide others to grasp a deeper understanding of the skills required to become adept at karate.
During his karate career Oliver has risen to the top of his field in different aspects of the art including refereeing, technical judging and instruction. He was both a referee and technical judge with the World Karate Federation and for 13 years served as secretary of its’ referee commission.
Oliver also qualified as a technical examiner with the Japanese Karate Federation (JKF) and following a rigorous physical examination he passed the prestigious grade of seventh dan black belt with JKF.
The Japanese Karate Federation were so impressed by his dedication and world-wide promotion of the wado style of karate they bestowed the prestigious title of Shu-Ha-Ri on the Belfast man.

Although approaching his 80th birthday (see his Kelly Show appearance above), Oliver is still able to produce techniques of such dynamism and precision that transcends his physical ability.
This demonstrates his exceptional ability to apply his skills and knowledge when performing karate. He has perfected the application of the movements to such a finite level that his unique ability appears effortless, but it is in fact brought about from many years of study.
“Obviously for any martial art to be effective the practitioner must be unaware of how their opponent is thinking or is going to act,” Oliver explained.
“The secret is knowing how to react when an attack is executed.”
This characteristic will be examined in detail throughout the seminar.
During this period of uncertainty Oliver believes karate has been the key to protecting his mental and physical wellbeing.
He has maintained his own training regime throughout the lockdown period and is delighted that others will now be joining him to explore the many benefits of karate.
The Northern Ireland Karate-Do Wado-Kai who are hosting the seminar have followed current guidelines putting all the necessary measures in place to ensure the safety of all those attending the event.
Training under a controlled environment has recommenced at their premises in College Street in Belfast City Centre.
Anyone who would like to find out more or who would like to enroll on the four day seminar which takes place from 20th to 23rd August should visit  or call 028 90 616453.