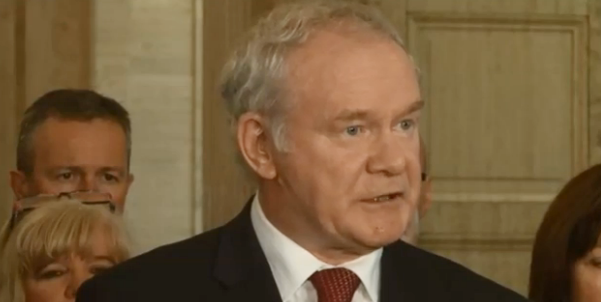 Unionists will file into inter-party talks at Stormont today despite a claim in yesterday’s report on paramilitary groups that the IRA Army Council still exists and that its members believe they exercise control over Sinn Féin.

And the DUP has come under withering criticism over its decision to reappoint its ministers and go back into full government in the wake of a report which went further than the Chief Constable’s controversial claims about the IRA in August which sparked the political crisis.

TUV leader Jim Allister described the DUP move as “political treachery” and claimed that the party will remain in government “regardless of what the IRA do”.

Mr Allister said: “Bad enough to sit in government with IRA/Sinn Féin under the false pretence that all their military structures and weapons were gone, but to rush back into the arms of Sinn Féin after authoritative confirmation that the IRA not only exists, but murders, has weapons and an illegal Army Council, which directs both the IRA and Sinn Fein, is political treachery.

“It says all that needs to be said about the DUP’s lust for power that hours after a report confirmed that the IRA Army Council not only existed but that it controls Sinn Fein, the DUP is back to business as usual with Sinn Fein. This from the party which claimed it only went into government with Sinn Fein on the basis of a manifesto in 2007 which stated ‘All paramilitary and criminal activity and terrorist structures must be abandoned before Sinn Féin is admitted to government.’

“TUV alone is clear about what needs to be done. The current arrangements are totally immoral and need to be consigned to history. No true democrat can sit in government with those controlled by an Army Council.

“Let the electorate be in no doubt. The DUP’s actions today show that regardless of what the IRA do the DUP will sustain them in government. Let every unionist voter remember this perfidious episode when next they vote.”

DUP leader Peter Robinson told UTV last night: “I thought that we had always argued that the DNA of the Army cCuncil was the same DNA as the Sinn Féin leadership so this is really a distinction without a difference.

“What it does point out is that these structures, even if they are being used for political purposes, should be removed. We should be relying only on political structures within our present process.”

In reference to the report’s claim that the IRA Army Council still exists, the DUP said it was “disturbed but not surprised”.

A party statement continued: “The report might clear the republican leadership in that it reaches a ‘firm conclusion that it is committed to the peace process’ and that ‘it has a wholly political focus’ but it makes depressing reading about the pace of change within the organisation and the level of control the leadership has over some of its members and their activities.

“In truth it demonstrates the scale of the task we all face in normalising our society and making the Assembly sustainable. While the report indicates that IRA structures remain in existence, it states it is in a much reduced form and the IRA of the Troubles era is well beyond recall. The factual assessment finds that the remaining organisation is not involved in any targeting, recruiting, arms procurement, planning or conducting terrorist activities as had been the case previously. Yet the idea that any paramilitary structure still exists is unacceptable. This is true of loyalist groups as much as republican ones.”

“We welcome the publication of this report because we were the party that forced the panel into existence. The position of the UUP has been entirely vindicated. The report has highlighted in the starkest terms the issue for Sinn Féin. How can they continue to deny the IRA doesn`t exist when this report makes clear Sinn Féin are being overseen by the IRA`s Army Council?

“This blows a hole in Sinn Féin’s argument. They demand we respect their political mandate, but they now need to make clear the extent to which that mandate is shaped by a group of unnamed shadowy figures who in the past have overseen the most lethal terrorist force on the planet.

“We note the panel concur exactly with our assessment of the triple evil of the continued presence of paramilitary organisations, which is: the control they exercise over communities, the impact of criminality and organised crime on the economy and the damage to our international reputation. We still see the opportunity to rid the country and this island once and for all of all paramilitary and associated criminal activity, but for now it’s over to Sinn Féin, who have some very serious explaining to do, starting with how they are going to accept reality regarding the IRA.”

Mr Nesbitt later added that the UUP would be entering into the resumed talks at Stormont today.

Deputy First Minister Martin McGuinness said Sinn Féin takes its lead from the Ard Comhairle and Ard Fheis and said his party would work to bring paramilitarism and criminality to an end. He added that Sinn Féin is the only republican organisation involved in the peace process.

“Republicans who support the Good Friday Agreement support the political institutions, support the peace process and don’t represent a threat to anyone in the community,” he said.

“There are, of course, enormous and urgent issues to be dealt with around the existence of armed groups, paramilitaries and criminality.

“We all have a responsibility to deal with these issues to tackle criminality and bring paramilitarism to an end and Sinn Féin will play a full part in this important work.”

The SDLP said there’s no surprises in the new report. Party leader Alasdair McDonnell added: “They may be committed to peace but too many of their members want a piece of the action on the side.”