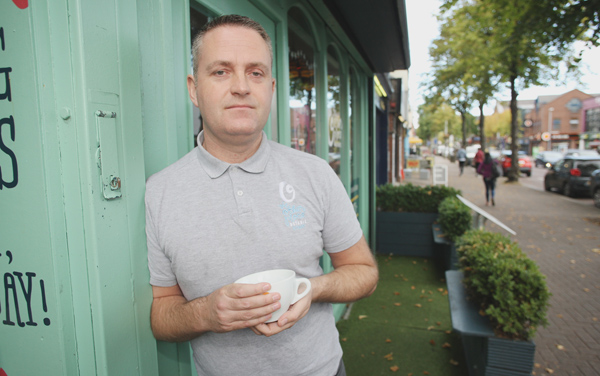 Richard Walker, owner of The Other Place on Botanic Avenue

BUSINESS owners on Botanic Avenue are calling for the extension of the city’s Christmas lights to the area to help tackle the yearly lull in winter trade.
As Christmas lights are erected in Belfast city centre, shoppers flock to the area for the winter festivities, making it the busiest time of year for most traders. However, on Botanic Avenue, which is especially popular with students, business owners begin to feel the pinch as the University term ends in December.
Richard Walker, owner of The Other Place on Botanic’s thoroughfare, said that extending the Christmas lights would not only improve trade, but also the festive atmosphere in South Belfast.
“Botanic Avenue is usually a very vibrant and busy area, but what we have discovered over the last couple of years is that when the Christmas lights are put up and the Christmas market comes that a lot of our customers want to go down into the city centre,” he said.
“They want to be part of the buzz and the festivities. On Botanic Avenue we notice a lull in trade around that time.
“We are very busy with the students returning around September up until November time. As soon as it gets close to Christmas time there is a massive downturn in trade.
“People are going into the city centre because they want to be part of the fun. The economy is very poor at the minute and a lot of restaurants are really struggling so we rely on Christmas to help our performance throughout the year, because come January when everybody has spent their money eating out is the last thing they want to do. It puts us under a lot of pressure.”
He continued: “Festivals and events like the Christmas market are great for the local economy, but in Botanic Avenue and the Ormeau where we aren’t part of the city festive programme we see a drop in footfall.
“With the tourist boom that we’ve had over the summer, we’ve seen that a lot of tourists are getting off the train at Botanic train station, and with the opening of the Grand Central Hotel, they are walking up Botanic Avenue, going to the Ulster Museum and Botanic Park. I would like that to be part of the route map for Christmas, so that we can keep that going.
“I have spoken to a lot of local traders here and they are all very much of the same mindset. We want Botanic and Ormeau to be part of the Christmas spirit –It’s good craic. My staff would certainly like to be coming to work seeing the Christmas lights and getting into the spirit. I think it’s a good idea for local traders and the local residents too.”
Botanic Councillor Declan Boyle said that bringing the festivities to the area is “great idea”.
“The Christmas market is good but I think we need to spread people out to other parts of the city too,” said.
“The business owners pay rates and they should be given a bit of help and assistance. In Botanic Avenue their market, by and large, is university students and in the middle of December when they go it’s very quiet, so it would do no harm to help out those businesses there.
“For the rest of the year it’s a thriving place, it has a great bohemian mix, so I think the area should be assisted in the Christmas months. It’s only a small stretch of road, and it wouldn’t have a terrible expense attached to it, so I would be very much in favour of it.”
________________________________________