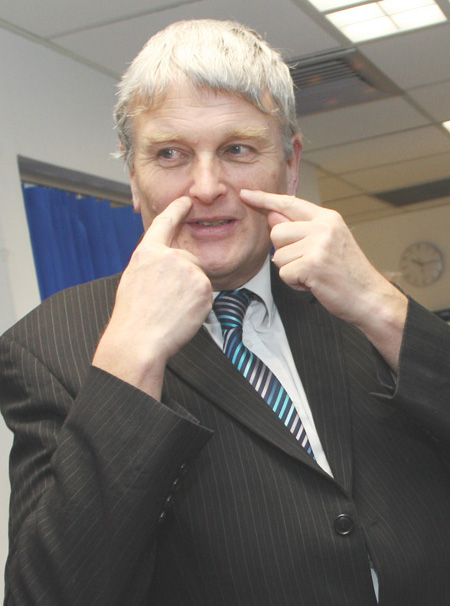 Alliance Party MLA Stewart Dickson has submitted a formal complaint to the Assembly Commissioner for Standards about alleged “sexist” comments made by the DUP’s Jim Wells.

Mr Dickson submitted the formal complaint after a live recording picked up Mr Wells appearing to make comments during an open session of the Assembly’s Public Accounts Committee on February 3.

In a recording by the Northern Ireland Assembly, Mr Wells appears to remark to fellow MLA Ross Hussey that he “can’t cope with women between eight and 80”.

The DUP have this morning refused to comment on the matter.

Mr Wells made the comments at the start of the meeting when a female civil servant entered the room.

"She reminds me of Arlene Foster… She scared the wits out of me… the resemblance there,” he said.

He is then heard saying: "I'm brilliant with women under the age of eight and great with those over the age of 80, it's the ones in between I can't cope with, between eight to 80."

East Antrim MLA Stewart Dickson has written to Douglas Bain to request an investigation on whether the comments breach the Assembly code of conduct.

“The code states members should promote equality of opportunity and not discriminate against any person regardless of anything. That would clearly not be the case if such comments as alleged were made," he said.

“I have asked the commissioner to investigate urgently whether the Assembly has been brought into disrepute. I look forward to his response and Mr Wells’ explanation of his alleged comments.”

"The use of offensive and derogatory language in relation to women is not acceptable and should be condemned,” she said.

"The sexist remarks apparently made by Jim Wells at an Assembly committee meeting last week are nothing short of contemptible.

"This type of boys’ club politics is out of date and should be a thing of the past.

"There can be no place for sexism in our society and I would call on Jim Wells to withdraw these offensive remarks and apologise."

In April 2015 Mr Wells was stood down as Health Minister over allegations he made anti-gay remarks at a hustings event during the Westminster election. However, The Public Prosecution Service later found that he did not have a case to answer.