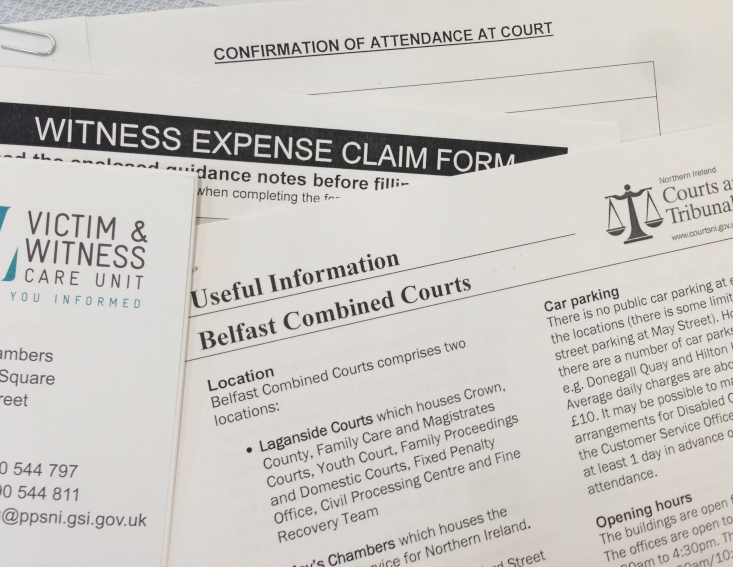 I’ve always been fascinated by court – the robes, the wigs, the traditions and so on. I think I must have been the only person in the world to have got excited to be called for jury duty and I can honestly say that I was disappointed when I wasn’t picked.

I spent a week in Laganside Courts a few years ago when I was training as a journalist, I was learning what it was like to do court reporting and was taking notes in shorthand. I found the whole experience fascinating. Unfortunately, of late my opinion of the courts has completely changed.

You see, in 2013 I was the victim of a crime. I stood terrified one October night and watched three young men completely wreck my car at my own front door. I rang the police and out they came. They checked the damage and dusted the car for fingerprints then they went away. They rang me a few weeks later to tell me that they had got a match for the fingerprints and were going to make an arrest. After that, I heard nothing else for a good eight or nine months. Then I received a letter in the post from the Victim and Witness Care Unit (motto: ‘Keeping You Informed’) to keep me informed – I was to attend court in November as a witness.

Anyone who knows me knows that I am a rather anxious type of person – a worrier, if you like. So from the day of the arrival of the letter until the court date I was a nervous wreck. On the court date itself I actually felt physically sick. I brought my cousin with me for moral support. When we arrived we were shown into a witness room and told to help ourselves to tea and coffee. The case was due to be heard at 10am, but the designated hour came and went and by 11am I was getting pretty wound up. At around 11.35am a police officer came in and informed me that the defendant hadn’t shown up and that I could go home. I casually remarked to the officer that I had a good idea he wouldn’t show, to which she replied: “No, he normally turns up.” I asked her what happens next and she replied: “The judge wants to give him another chance, so we’ll arrange a new date.” It was at that point that I began to suspect that this case might not go the way I hoped it would.

I received another letter informing me of a January court date. I checked my diary and found the date didn’t suit. I called the VWCU and told them as much – maybe I shouldn’t have bothered as failing to turn up didn’t seem to have been that big of a deal first time round. Secretly I hoped that a second postponement would see the case thrown out. That didn’t happen and a third and final date was set for last week.

By this stage I knew the drill: show up, sit around nervously, drink coffee, wait. Once again, the case was slated for 10am and once again 10am came and went. When 11am rolled around I was starting to feel relieved, a little excited even; the thought of being sent home again seemed enormously attractive. In the event the accused waltzed in around 11.15am. My stomach lurched and I steeled myself for a quick march into court. But the slot was gone. I was told by a police officer to come back after lunch. “Sure why don’t you go into town and do a wee bit of shopping?” she suggested.

I didn’t go shopping, I sat around for three hours feeling increasingly sick and worried. Just after 2pm a representative from the PPS had a quick chat with me, asking did the accused ever powerwash my car? I told her no, I never have my car powerwashed. Shortly after that I was finally called as a witness in Regina versus The Bloke Whose Fingerprints Were On My Wrecked Car. A courtroom is without a doubt the most intimidating environment I’ve ever been in. I sat down, my heart racing, and was questioned by two solicitors and a judge. For the first time things moved quickly – I was in and out of the witness box in five minutes, maybe ten.

An hour or so later the police officer in charge of the case rang me and said the accused had been found not guilty. That was it. I suddenly felt nauseous. But his fingerprints were on my car, I stammered – and they didn’t get there at any powerwash. Turns out when that was put to him he told the court maybe he touched my car in a supermarket car park. So how, I asked her, did a fingerprint of his get inside my locked car in a supermarket car park? Oh, that one? That print was only a “partial” and we couldn’t rely on it. Really? First I heard of it – might have been nice if somebody had told me that earlier. As for my identification of the accused – it was dark, I couldn’t have identified him with any degree of certainty. Case closed.

So here I am after sixteen months of stress, after paying to get my car fixed, after three court dates, after three days off work. That is that.

My verdict? Well, I think I’ll keep that to myself, Your Honour.