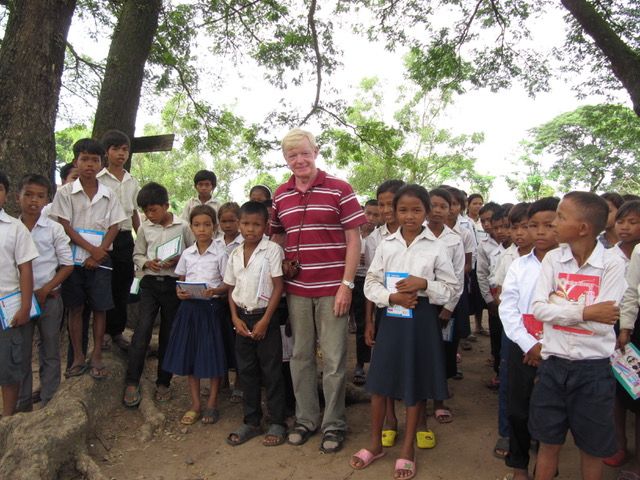 FUNDRAISER: Cecil Holmes has been working in Cambodia for over 11 years and is fundraising to buy motorbikes for local restaurant workers

Cecil Holmes from Newtonbreda worked as a school teacher before taking up an appointment with the examination board CCEA and on retirement he travelled to Cambodia to work as an educator.

“While working as a self-funded volunteer educator, I also began supporting a small restaurant business," he said. "It is struggling just like businesses worldwide but in a developing poor country the impact of Covid is devastating. I travelled to Cambodia as a volunteer educator around 11 years ago.  This has been nothing short of a spiritual experience for me."

Cecil said he has been influenced by the compassionate approach of the country's Buddhist monks.

“By chance I met an inspirational Monk called Venerable Somnieng who had established a charity organisation to support the young people from poor families," he explained.  "He was based at the Wat Damnak Buddhist Pagoda in Siem Reap, Cambodia the home of the famous Angkor Wat Temple. One day he asked me to stay in Cambodia and open a school so that local children could learn English and go on to work in the tourism industry. It has been my privilege to do so for around 11 years."

As part of that work, Cecil also met a family whose lives had been turned upside down by the pandemic.

“Tevy Moung and her mother were in a dire position. For several years now I have been walking alongside them to help them get back on their feet."

Cecil said that Tevy and her mother now have a small restaurant in Siem Reap called Tevy’s Place that he supports financially to keep them going.

“It was very successful but is struggling now because of Covid which has an exaggerated and more penetrating and devastating effect on an already poor country. Tevy lost her father and three sisters in the genocide of 1970s.  They have no idea where they were buried. The restaurant is making little or no money but I keep it going. There are four female and one male member of staff who are hardworking.  They travel to work on bicycles but it is dangerous now.  One of them was pushed off her bike at five in the morning. She was terrified.

“They need to work to earn a small wage to feed themselves, their families and their village when they can. A motorbike would be life changing, allowing them to get to work safer and to visit their families in the countryside.”

Cecil is hoping to raise £5000 to purchase the bikes. You can donate to his cause here.