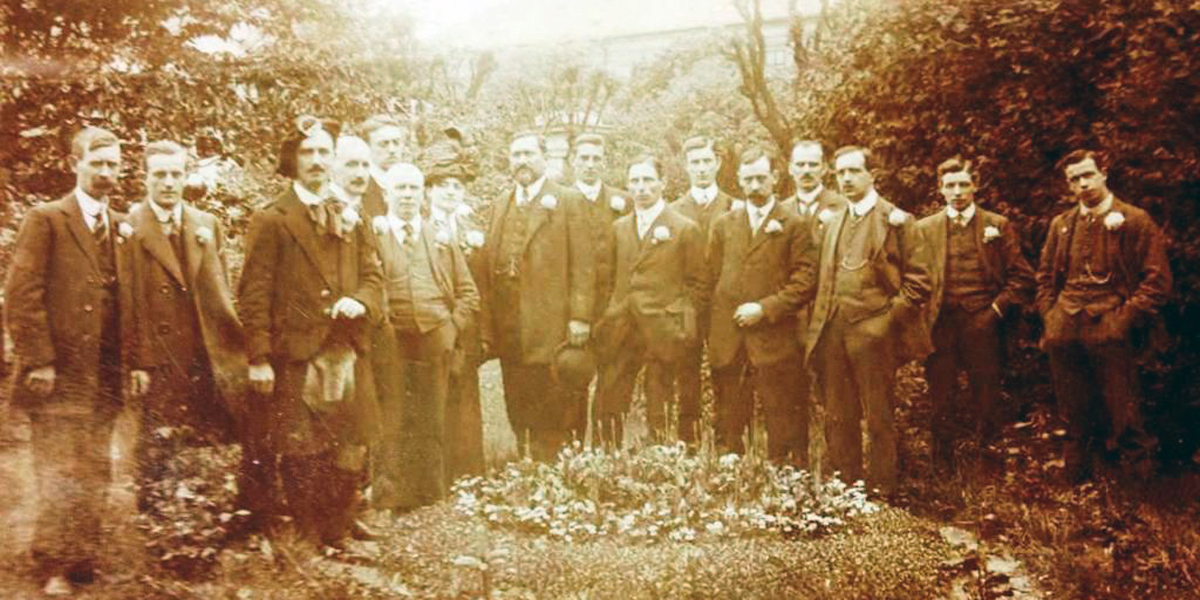 101 years after it was  taken, an historic photograph of Belfast Celtic while on tour in Europe has  emerged from the archives.

Painting a fascinating picture of the club’s 1912 tour of Bohemia – now the Czech Republic – the image [opposite page] was uncovered this week by the Belfast Celtic Society.

Celtic’s official touring party is snapped for posterity in the picture, which includes the distinguished historian and writer Cathal O’Byrne.

“One of the society’s committee members was sifting through old Belfast Celtic documents which had been given to us by the club’s last Secretary, Frank Hennessy,” explains Pádraig Coyle, Chairperson of the Belfast Celtic Society.

“The picture tumbled out of one of the bundles and we set to work quickly identifying the team and the era”, he added, “and it was soon clear it was the team who played in what was known as ‘Gay Bohemia’, before the First World War.”

It was a successful tour in which the legendary local team won four of its five challenge matches.

“While European turmoil was looming, there was also turmoil in the Irish League that season,” added Pádraig, “as all the clubs apart from Linfield had broken away from the IFA to form the Gold Cup competition, of which Celtic were the first winners.”

Great players like Louis Crowe and Harry Buckle are pictured in the line-up, but possibly the most historically important are two of the men. The first is  goalkeeper Oscar Traynor, who would go on to be an IRA leader and fight in the 1916 Easter Rising. The second is a County Down man resident in West Belfast, writer, poet and musician Cathal O’Byrne, a key figure in the Gaelic Revival of the 19th century. O’Byrne went on to sit on the Military Council of the IRA in the 1920s and the Ulster History Circle unveiled a plaque at his home in Cavendish Street in 2004. As I Roved Out, his book of collected stories, is a regarded as a seminal work on the history of Belfast and remains a treasure trove for academics.

“It’s hard to miss O’Byrne as he is wearing a kilt in the picture,” observes Pádraig. “Famous for his dandy Celtic dress style, he sticks out like a sore thumb in the row of men in their sober Sunday suits.

“O’Byrne walked among the giants of the political and literary worlds at this pivotal point in Irish history and was great friends with the West Belfast MP Joe Devlin, along with others like Roger Casement, Francis Joseph Biggar, Alice Milligan and Ethna Carberry. Presumably he went along to sample the culture of central Europe, but since he also features in the official squad photograph taken in Prague [above], we can presume that the club regarded him as a guest of honour.”

“Belfast Celtic Directors Dan McCann, Hugh McAlinden, David McCloskey and Bob Barr are pictured, along with a Dr Dubrouen and his wife – again we presume that they were guests of the club who perhaps provided medical cover.

“There were comprehensive tour reports in the Belfast papers that week too, so we can also assume they were filed by O’Byrne, who was a journalist by trade, though we’re unsure if he penned his own particular Bohemian Rhapsody regarding the trip.”

In the press reports, the team’s visits to Prague, Kolin, Pardubice and Furnau are detailed. We learn the team ate donkey sausages and at breakfast were offered milk laced with cognac.

Celtic defender Jimmy Connor, a Downpatrick man, got the shock of his life when he was recognised by the maître d’ in the House of Representatives in Prague – it turned out the waiter was once employed at the Slieve Donard Hotel in Newcastle and recognised the famous Celt immediately.

Director Hugh McAlinden was said to have been the most popular man on the tour, because “he had the foresight to bring along several packets of Belfast tea” – the local variety didn’t impress the travelling Irishmen.

Reflecting on the picture, Pádraig Coyle said: “It really has unlocked pieces of a long-forgotten history. Some of our members may wonder what Belfast Celtic were doing in central Europe in the first place. Press reports of the tour seemed to provide the answer. Johnny Madden, who played in Glasgow Celtic’s first-ever game in 1888, was the coach of Slavia Prague, who Celtic beat twice on the tour.

“It’s probably safe to assume the invite came from him. Indeed, Glasgow Celtic had also played there a few years beforehand – so the reports they brought back must have been good.

“Madden is a revered historical figure in Czech football. He was buried in Olanske Cemetery in Prague in 1948 and Slavia’s famous ‘Red Star’ was placed on his headstone.

“On May 28 this year, flowers were laid at the graves of Celtic players around the world to mark the 125th anniversary of the club’s first game. Madden was included in this event, organised by the Celtic Graves Society, as were Charlie Tully and Mickey Hamill here in Belfast. They all remain legends of the game forever.”

The Belfast Celtic Museum is open tonight (Thursday) from 7pm-9pm at the Park Centre. For more info, go online at www.belfastceltic.org