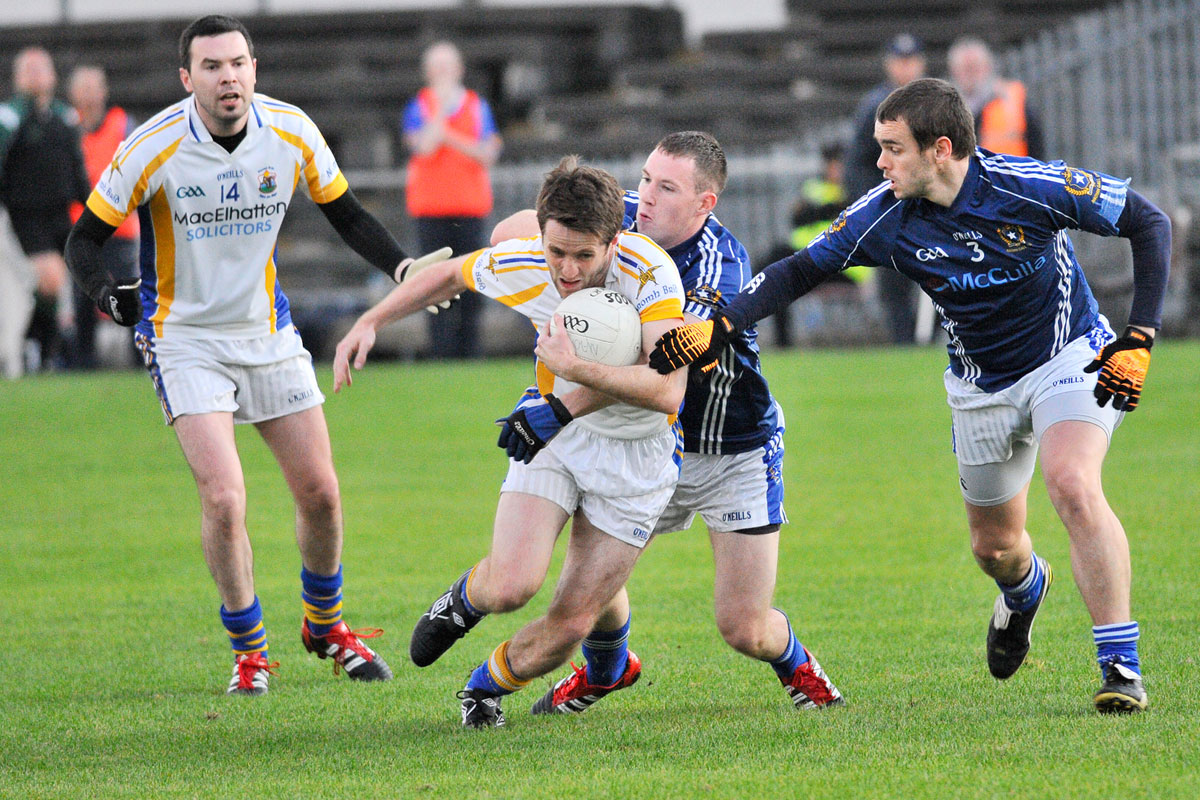 “Our subs could give us a better game.” A St Gall’s player was overheard making this unkind observation at half time of the Senior Football Championship semi-final between the reigning Antrim champions and St Brigid’s at Casement Park on Saturday.

The statement bordered on arrogance, but when you looked to the Milltown bench packed with inter-county footballers, it’s a statement hard to argue with. Anto Healy, CJ McGourty, Chris Kerr, Darren O’Hare, Paul Veronica and Ciaran Gallagher were all amongst the subs for the 2010 All-Ireland winners.

By half time, the game was over as St Gall’s swept past their south Belfast opponents.

Their pace, movement and passing was too much for Conor MacSherry’s charges and St Brigid’s scrambled to stay in touch. Two substitutions were made by the St Brigid’s management team inside 20 minutes as St Gall’s threatened to run away with the match.

Michael Pollock impressed with two early scores taken from each flank before Karl Stewart extended St Galls’ lead to 0-3 to no score after five minutes. Sean Kelly then had a glorious goal chance but his shot was well saved by St Brigid’s goalkeeper Willie McSorley.

Niall Cunningham got the Malone lads off the mark with a free, but St Gall’s responded with four more without reply. Pollock was finding far too much time and space and after ten minutes the first switch was made with Kevin Gallagher thrown in to try and deal with the fluid St Gall’s forward line.

The pace dropped and over the closing fifteen minutes of the half St Brigid’s didn’t have a single effort on target while St Gall’s tacked on four more to leave nine between the sides at the break.

In truth, the West Belfast lads were toying with St Brigid’s as they played ‘keep ball’ in their own half.

St Brigid’s got the boost they needed at the start of the second half when Mark Sweeney bore down on goal and was fouled by a combination of Sean Burke and St Gall’s goalkeeper Ronan Gallagher.

Micky Ward took the penalty and his initial effort was saved by Gallagher, but referee Gregory Walsh ordered for it to be re-taken and this time Ward slammed the ball to the back of the net.

Ward added a point from play as St Brigid’s looked for a route back into the match, but St Gall’s simply took the concession of the goal as a signal to up the tempo.

CJ McGourty and Anto Healy were thrown into the fray, and CJ scored a wonderful long-range point with virtually his first touch.  Kevin Niblock stroked over a free and the impressive Micky Pollock scored the last of his five points from play before being replaced by Brendan Bradley.

Darragh Edwards and Niall Cunningham added points for St Brigid’s, who had made all five of their subs long before the final few minutes, when James Loughrey, who had been unable to impose himself on the game, limped off injured.

It was a sad finale for St Brigid’s but not many teams in Antrim, or Ireland, could have lived with St Gall’s on Saturday night.

Lámh Dhearg await the champions in the county final on September 24, while St Brigid’s can reflect on steady progress in 2011.