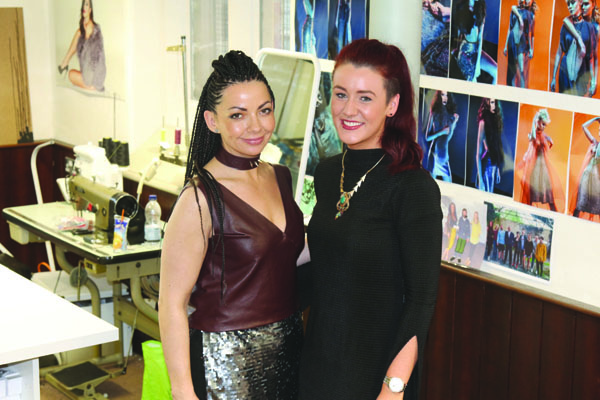 SHE’S North Belfast’s very own fashion designer whose work has caught the eye of Victoria Beckham and feature on the catwalks of Fashion Week.

But as Chloe Dougan’s name is about to go stellar after having designed a wardrobe for classical music star Ruth McGinley, she’s not forgetting her roots in the community.

Based in the Duncairn Centre for Culture and Arts, when she’s not designing high-end fashion for the catwalk Chloe also takes classes to introduce local people to the world of fashion and making your own clothes.

Chloe says working with Ruth during the BBC Proms has been an exciting process and she is looking forward to helping produce garments for her upcoming tour.

Away from the glitz and glamour Chloe has started her fashion design classes at the Duncairn and their popularity continues to grow.

“I did a textile class for people from the local community earlier this year. The ten of us decided on a theme and we made cushion covers.

“I taught them how to stitch and how to sew and different technical skills like that – something they had never done before, so we ended up with all these georgeous cushions.

“Now I’m doing a class called ‘Introduction to Fashion Design’ and we are making a shift dress. This class is for people who’ve never sewn before but who have always liked the idea of making something for themselves and it’s done in a nice relaxed atmosphere where they come in and go through the process step by step.

“There’s men and women in the class which is nice too. It’s teaching, but at the same time it’s not because it’s not that formal and I get a lot of one-on-one time with the people in the class. Some are more experienced than others but I am able to work with everyone so we can work at a pace that suits them.”

Bringing fashion design to the people isn’t something Chloe dwells on.

“When I was younger I wanted to be a teacher and here I’ve done a few arts and crafts classes with kids which I loved. I love the interaction and building up relationships with people rather than just making them a dress and getting them out the door. I like the fittings and like that social side where people will tell you about their lives and do have a bit more of a relationship. I will be starting a new class on Wednesday nights with a youth group from Carrick Hill for 12- to 15-year-olds and I’ll be doing a variation of themes so I’ll be teaching them from the beginning, how to use a sewing machine, and eventually we will come out with something. I may have to give them more help but if that’s what they need then that’s fine. It’s a great thing to do.”

Men are also getting in on the act.

“We have two guys in the sewing class. Even though we are making dresses I would never restrict the class to a single gender. It’s not about that, it’s about learning. One of the guys in our textile class loved it so much he has signed on to the fashion design class,” she added.