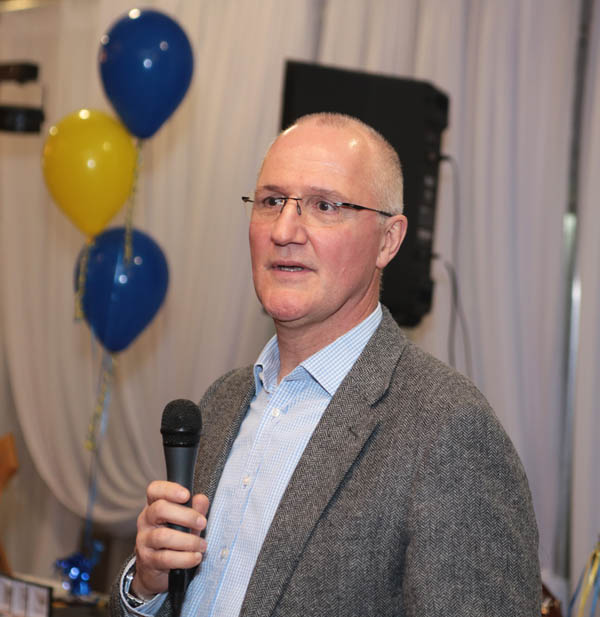 Antrim’s captain from the 1989 All-Ireland hurling final, Ciaran Barr, has stressed the importance of the Casement Park project in terms of Gaelic games and wider society

IN the second part of my interview with Ciaran Barr, the Antrim All-Star discusses his new role in the GPA, thoughts on Casement Park, recalls his school experience at St Mary’s CBGS and offers his insight to what is the key to success.

Barr recently took on the role of Finance and Operations Head in the GPA (Gaelic Players Association) and offered an insight into the key aims of the organisation that looks after the welfare of senior inter-county players.

“I’ve been involved in the GAA all my life to this point, either playing or coaching,” Barr reflects.

“Currently I coach the minor camogie team in Raheny. My daughter players, she’s 17 and still plays which is great.

“I help coach the junior adults in Raheny and two years ago I was involved in the senior footballers in St Vincent’s and I’ve been involved in various other teams over the years.

“When I lived in Seoul, I got involved in Seoul Gaels and helped coach there. I think it’s something that gets into your blood and it’s just something you do”.

“This job came up with the Gaelic Players Association (GPA) so I’m going to be the Finance and Operations Head.

“Ireland has modernised and as people become more aware of other sports and cultures like Australian Rules or American Football or whatever and get used to players being treated in a certain way. That has to filter through your culture, especially if certain players have gone on and played in another sport like professional rugby in Ireland has a big crossover with Gaelic games and Australian Rules obviously has as well.

“You’ve had a professionalisation of the preparation of Gaelic players but they aren’t professional athletes, so ultimately the GPA came out of that pressure and that has accelerated in the last few years.

“If they are at a deficit because of the fact that they play Gaelic games, that’s not the place we want to be because they are fantastic games.

“We want people to continue to play them and also to aspire to being an inter-county player.

“Once they get there, we want them to be able to sustain that lifestyle of an inter-county player because that’s the role model.

“That’s what every kid that becomes a GAA player and goes to a mini-league on a Saturday morning and their mum and dad might never have played Gaelic games, but they’ve seen it and head about and want to be at Croke Park and Casement when it’s built.

“That aspiration and those players are the biggest attraction that we have. Therefore, we need to take care of them and make sure they aren’t suffering in any way because they’re playing Gaelic games, so that’s what the GPA is about.”

Casement
The formation of a new power sharing institution at Stormont has reignited hope that the stalled Casement Park project may finally build momentum.

Barr believes there are both tangible and intangible benefits to the project and wants it to be something that everyone can aspire to become a part of.

“There is a tangible benefit, which is in terms of a stadium that can host concerts, events and be a hub for lots of economic activity – that’s a really good thing for West Belfast and Belfast in general,” Barr insists.

“If you look at the economics of big cities – stadia form a part of that fabric whether you like it or not. I know that can be controversial because if it’s being built beside your house you don’t want it. But the fabric and the economics and the infrastructure of a city usually has a number of stadia in relation to that infrastructure and that’s got an economic benefit.

“I’ll tell you from having played at the old Casement, it was a fantastic field; it had a brilliant atmosphere and was a great pitch.

“I’ve played in Croke Park and it’s just an amazing feeling and a great thing to aspire to. I’ve played in Thurles and Páirc Ui Chaoimh and the same thing – they are amazing fields but they are more than a pitch.

“Whether they get there or not is sort of irrelevant. It’s giving them that sense of being part of it and wanting to be connected to it means that they’ll stay in the GAA for the rest of their lives. That’s the huge intangible benefit that an iconic stadium can have- which is Páirc Ui Chaoimh, which is Semple Stadium in Thurles and which is Casement Park – hopefully.”

Barr was educated at St Mary’s CBGS on the Glen Road, a school famed for producing many hurling stars who have went onto lift the Danske Bank Mageean Cup and represent Antrim.

He describes the Christian Brothers’ project as a piece of ‘social engineering’ and admits he didn’t lift a hurl until he attended the Glen Road site – pinpointing the work of Br O’Mahoney, Br O’Reilly at St Mary’s and Joe Quinn at Rossa.

“At a serious level it’s clear what the Christian Brothers did – a piece of social engineering,” said Barr.

“In terms of sports, my first three hurling coaches were Joe Quinn in Rossa and Br O’Mahoney and Br O’Reilly. I went to St Finian’s and it was all football in St Finian’s – there was no hurling.

“The first time I touched hurl was when I got to St Mary’s CBGS and it was a Cork man and a Tipp man in Br O’Mahoney and Br O’Reilly, and Joe Quinn in Rossa who were my first three coaches.

“St Mary’s had that ethos and that DNA and culture of hurling and it was being taught by fellas who knew what they were doing. Hopefully it comes back to the levels that it was in my day and prior to me.”

Success
To Barr there are three-components to success but is adamant that there are many different levels, flavours and faces to it.
“Success has many levels,” Barr acknowledges.

“Success has many flavours and many faces. Success for one person could be running 5k and a success for somebody else could be playing or winning an All-Ireland.

“It all relates to the amount of potential that you have and whether you have maximised that potential and you’ve pushed yourself.

“It’s irrelevant whether you’re a star athlete or whether you’re academically brilliant. It’s relevant in that you’re pushing yourself and making the most of the talent that you’ve been given.

“There’s three things I would say: one is perseverance – that you try and continue to try; the second thing I would say is consistency. I often joke with my players when I’m coaching them, I say that you’re here on time, you’ve shown up on time and always remember – decisions are made by those who show up. That’s consistency: be there and be there all the time.

“Lastly, talent: maximise your talent; everybody has a talent for something. It can be playing, admin, intellectual or it can be artistic – maximise the talent that you have. Perseverance, consistency and talent is the key to success.”