Clanmil staff rally round for Pauline as she hits the century 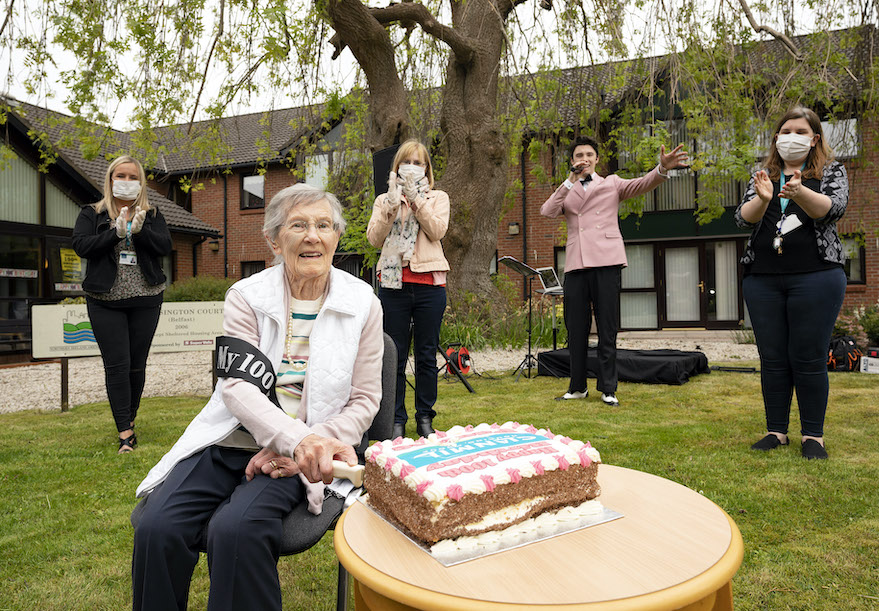 THERE were celebrations at a South Belfast sheltered housing scheme this week to mark one resident’s 100th birthday.

Born on May 18, 1920 in Corcreeghagh, County Louth, she was one of eight children.  She moved to Belfast when she married and ran a bar and green grocers with her late husband Gerry for many years. The couple had five daughters and also raised a nephew. Pauline has 18 grandchildren and 10 great-grandchildren.

Plans for a big 100th birthday celebration with Pauline’s neighbours, friends and family thankfully this week still took place, thanks to Clanmil Housing, who stepped in to help make sure that everyone could still safely be part of Pauline’s landmark day.

Working with Pauline’s daughter Anita, the Clanmil team organised for swing singer, Harry McGarrity to entertain Pauline and her neighbours from the carpark in front of their apartments. Harry has been volunteering his socially distanced services at care homes over the past weeks, bringing some light relief from self-isolation and helping lift spirits with his repertoire of songs from across the decades.

The Blessington Court neighbours were able to safely enjoy the show from their patios and windows before watching on as Pauline cut her birthday cake. A slice was delivered to everyone’s front-door so they could enjoy a treat together.

Pauline was delighted that her neighbours were able to be part of her celebration.

“I’ve lived through a lot in my 100 years. There have been many ups and downs and if there’s one thing I’ve learned, it’s that you just have to be take life as it comes and make the best of every situation.

“This virus and lockdown are just another bump on the road and I really appreciate how everyone has worked together to make sure I’ve still been able to have a lovely day.

“I’ve lived here at Blessington Court for the past eight years and I’ve lovely neighbours. It’s been great to see so many of them enjoying the music.”

Pauline’s daughter Anita O’Connor said: “100 years is such a milestone and we were all really looking forward to celebrating with Mum.

“It’s been very hard for her and for the family that we haven’t been able to visit over the past weeks, and we hated the thought of her being on her own on such a special day.

“We really appreciate how Vicky and Linzi at Clanmil have rallied round and found a way to make this happen while everyone stays safe.”

Linzi Webb, Good Relations Officer at Clanmil added: “When we heard about Pauline’s 100th birthday celebrations being cancelled we wanted to help. Self-isolation is particularly hard for older people like those who live at Blessington Court but it’s vitally important. It’s been an absolute pleasure to be part of Pauline’s big day.”