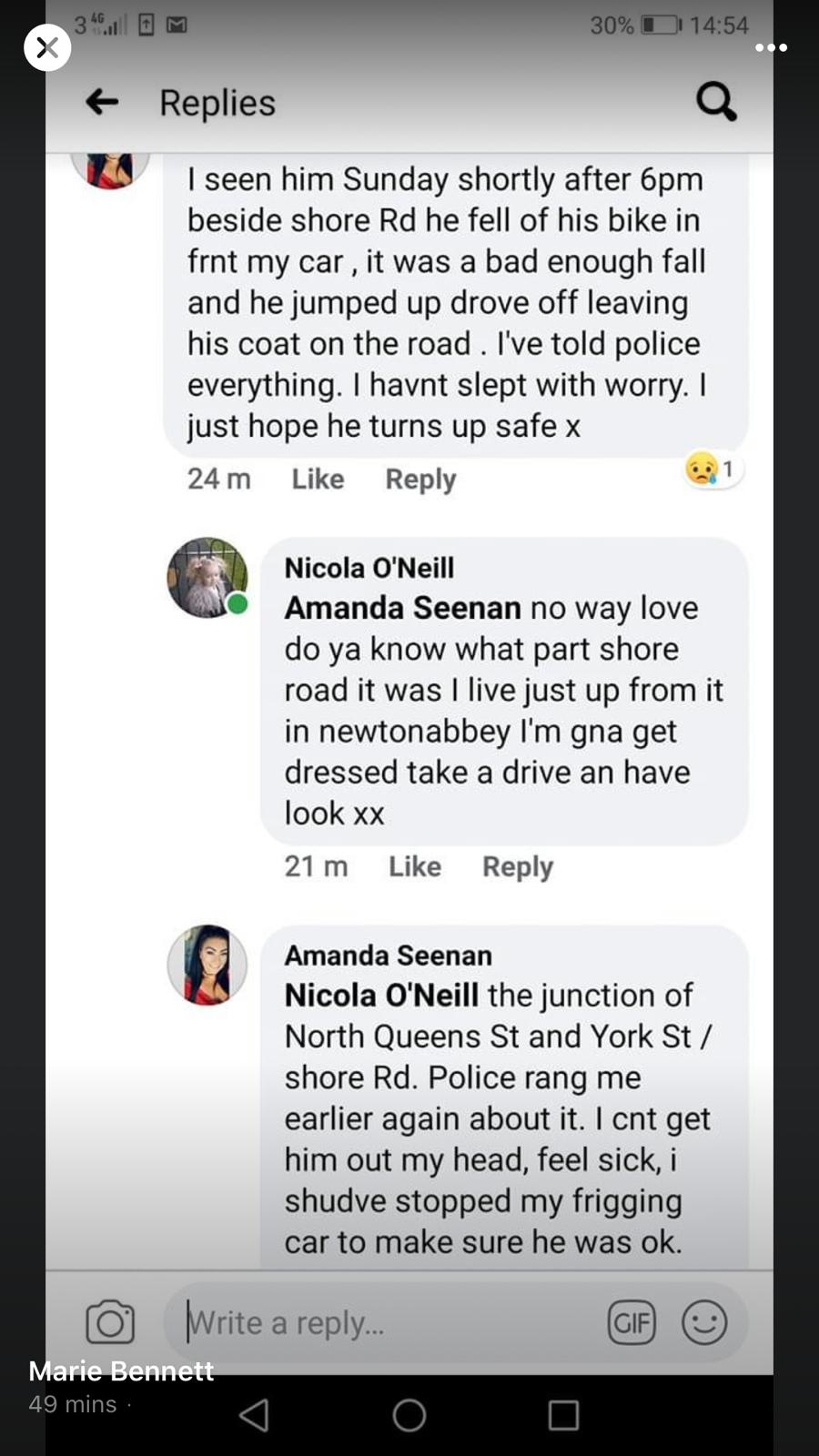 Community workers from across the peace line in North Belfast have come together in a frantic search for missing teenager Noah Donohoe.

Police say the St Malachy's pupil who hails from South Belfast was last seen on Sunday evening. It is reported that a search party of local people will leave from the Limestone Road at 6pm this evening (Tuesday) to search for Noah.

Writing on her Facebook page, health worker Amanda Seenan says she saw Noah shorty after 6pm on Sunday at "the junction of North Queen Street and York Street/Shore Road".

"He fell off his bike in front of my car," she wrote. "It was a bad enough fall and he jumped up and drove off leaving his coat on the road. I've told police everything."

Said a PSNI spokesperson: "Police and the family of 14-year-old Noah are becoming increasingly concerned for his whereabouts. He was last sighted in the area of the Northwood Road/Premier Drive (off York Road) area of North Belfast just after 6pm on 21 June."

Can people from all North Belfast please assist in finding this young man.

I’ve taken a call from Community Worker Jim Crothers who explained that mass amounts of volunteers are checking York Road area for Noah.

In Jim’s words - “North Belfast can come together to find him.” pic.twitter.com/cCQmvJ99hb

Northwood is on the unionist side of the peace line and off the Shore Road.

While there have been reports of sectarian harassment in the area over the past ten days, including incidents at Grove Playing Fields, it's not known if there is any link to Noah's disappearance.

When he left South Belfast, Noah was wearing a khaki green North Face jacket, tie dye light blue/navy hoody, grey sweat shorts with emblem on one leg and Khaki rucksack. There are reports that he may have been spotted later in North Belfast without these items of clothing.

Residents in the Shore Road area said Police had been in the area checking back gardens of property.There are also reports of searches at the Waterworks and the police helicopter has been in the air above North Belfast on several occasions over the past 48 hours.

Very distressing for his family and friends.

Sinn Féin councillor Conor Maskey said unionist community workers had reached out to him for help in locating Noah. "While he was last sighted in the York Road area, it's likely that as a St Malachy's boy, he was more familiar with the nationalist Antrim Road area," he said. "I have no doubt that the entire community will unite to help in this search."

Anyone with information is being asked to  police immediately on 101 quoting reference number 1619 of 21/06/20.