Community in shock after death of Eoin Hamill 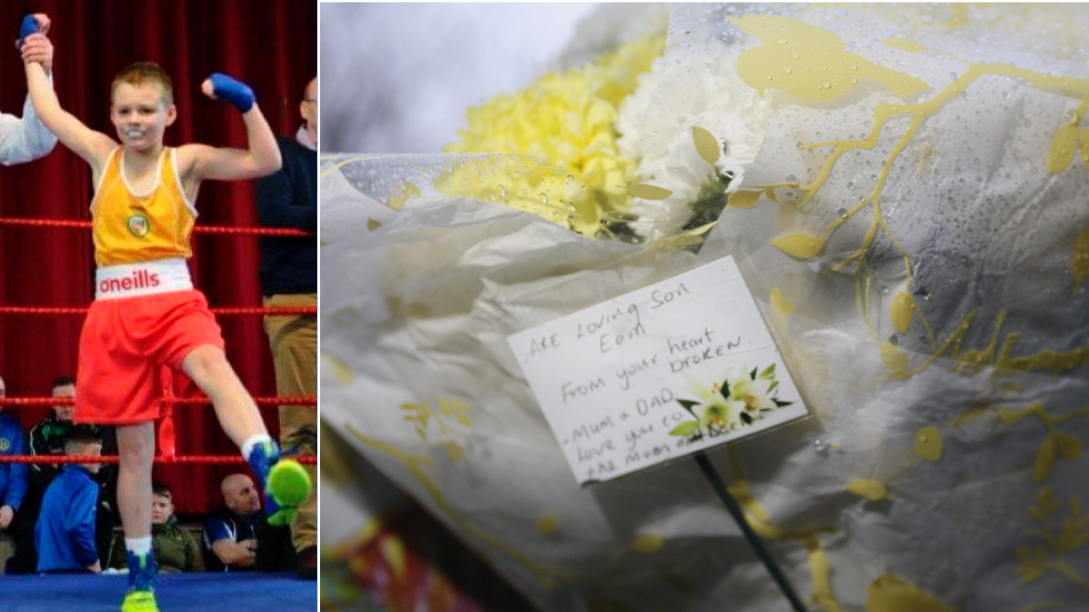 THE funeral of a young boxer who tragically died after being hit by a car on Friday evening will take place tomorrow (Tuesday).
Eoin Hamill, a 13-year-old Coláiste Feirste pupil, was knocked off his bicycle on the Upper Springfield Road shortly after 4.30pm on Friday. He was taken to the Royal Victoria Hospital but passed away a short time later.
Floral tributes and candles have been left at the scene of the accident. A bouquet from Eoin’s parents Lisa and Martin read: ‘Our loving son Eoin from your heartbroken mum and dad, love you to the moon and back.’ Another read: ‘To our wee Eoin, look after everyone, loved every day, from Granny Broph.’
Taking to social media site Facebook, Eoin’s school Coláiste Feirste said the school community are “heartbroken at the news Eoin Hamill has passed away”. “We are thinking of Eoin and his family and will be available to support you at this difficult time. Rest in peace champ.”
An extremely talented young boxer for Gleann ABC, Eoin was described by his club as a “lovely young kid who was a big part of our club”. “He was loved by us all outside the ring, he was admired for his skill in the ring but instead of wishing him the best for his next fight or shouting at him to keep them hands up or cheering him on to victory, we will be saying a very sad and truly heartbroken goodbye to one of our own.”
A devastated local community held a candlelit vigil to show support to Eoin at the Turf Lodge shops on Sunday night. Sinn Féin Councillor Michéal Donnelly spoke of how the large crowds which gathered “showed how much of an impact Eoin has had on people’s lives and how much support and solidarity there is within our community for the McCullough and Hamill families at this heartbreaking time.”
A man arrested by police investigating the collision has been released on bail pending further enquiries.
Requiem Mass for Eoin Hamill will take place at 10am tomorrow (Tuesday) at Holy Trinity Church, followed by burial in Milltown Cemetery.