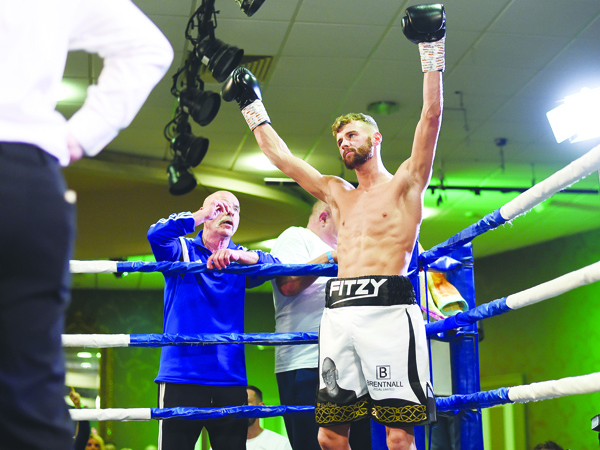 IT is a fight that has created a buzz and prompted much debate, but Joe Fitzpatrick insists he has the tools to claim the Irish lightweight title at the expense of Gary Cully at the sold-out Ulster Hall on Saturday night.

This battle of the southpaws has divided opinion and is hopefully the beginning of a run of all-Irish fights in the 135lb division given the talent at the weight, with the sold-out signs reflecting the huge interest.

A look at the respective records gives little indication of who has the upper hand with Fitzpatrick entering the ring with a 10-0 record to Cully’s 9-0.

However, the Kildare man will enjoy a height and reach advantage, but then Fitzpatrick has the greater stoppage ratio, suggesting it could be a case of who can impose themselves better on the night will prevail.

The Divis man is fully confident he has the tools to dominate and has prepared accordingly ahead of a fight that will see the winner take a huge step forward in their career.

“I’ve done a load of training for this so I’m ready to go,” he reports.

“We found out about this fight at the end of November, so I’ve been training constantly since.

“I’ve had a really good camp and ‘Nugget’ (trainer, Gerry Nugent) said this is probably the best camp I’ve ever had so everything’s looking good. I don’t want to give too much away, but we have a game-plan that is looking good.

“I’m stronger and faster than him. At this moment in time I think I’m fitter than him as well.

“I’ve never went 10 rounds before, but in sparring I’ve been doing that and on the pas too, so I’ve plenty in the tank for this and I’m more than ready.”

The last time a Divis man topped the bill at the Ulster Hall was a night that has entered Belfast boxing folklore.

In April 2009, Paul Appleby arrived in the city to defend his British featherweight title against Martin Lindsay, but was dethroned in six rounds by the ‘Mac Man’.

The atmosphere inside the famous Bedford Street venue surpassed electric and was more of a bear pit for the visitor.

That intimidating cauldron will be replicated this weekend as Divis will again decamp to roar on one of their own, with Lindsay this time in the corner to serve as a link to that famous evening almost 11 years ago.

“I fought there in an exhibition before the Ulster Seniors when I was 11 but not since.

“The last time I was watching the fights there was Martin Lindsay’s British title fight against Paul Appleby and the place was buzzing. Martin’s now my coach and we come from the same area, so I’m hoping to get the same support. The whole of Divis was there that night and the place was going nuts.

“It was intimidating that night, but I don’t need it to be the same here although I know he will be.”

Cully has rejected notions that he will be overcome by the occasion.

Indeed, all of his nine professional fights have taken place I Belfast, so he is well aware of what to expect from the crowd and sees this as just another step on his journey.

‘The Diva’ will bring his own fans and is confident he will send them home happy.

“I feel like my career starts with this fight,” he said.

“I’ve done my apprenticeship and it’s time to step into real fights now.

“I want to win this title, defend it in the summer and then fight again so that hopefully by the end of 2020 I can be world-ranked.

“I feel like I’m actually building a fan-base of my own in Belfast. There are plenty of people there coming to see me and I’m bringing a few busloads up from Naas too. It’ll be loud in there on the night.”

Just who will be the happier support after is the source of much debate.

This time last year, an Irish title fight at a sold-out Ulster Hall could have seemed further away for Fitzpatrick who had fallen away from the sport.

However, he rediscovered his desire and despite the death of his father, Gerry, the former Immaculata man teamed up with Leonard Gunning and Dennis Morrison of Boxing Ireland and hasn’t looked back.

He admits it means that bit more now as he is determined to honour the memory of his dad with the Irish title he has the tools to claim this Saturday night and become the latest Divis man to score a famous win at the Ulster hall.

“I’ve turned a new leaf since I signed with them,” he insists.

“From the passing of my da I’ve just focused and got the head down. I’ve been training constantly and not messing about like I used to.

“This will mean everything to me and will push me on in the rankings. I wish my da was here to see it, but some things just can’t happen.”