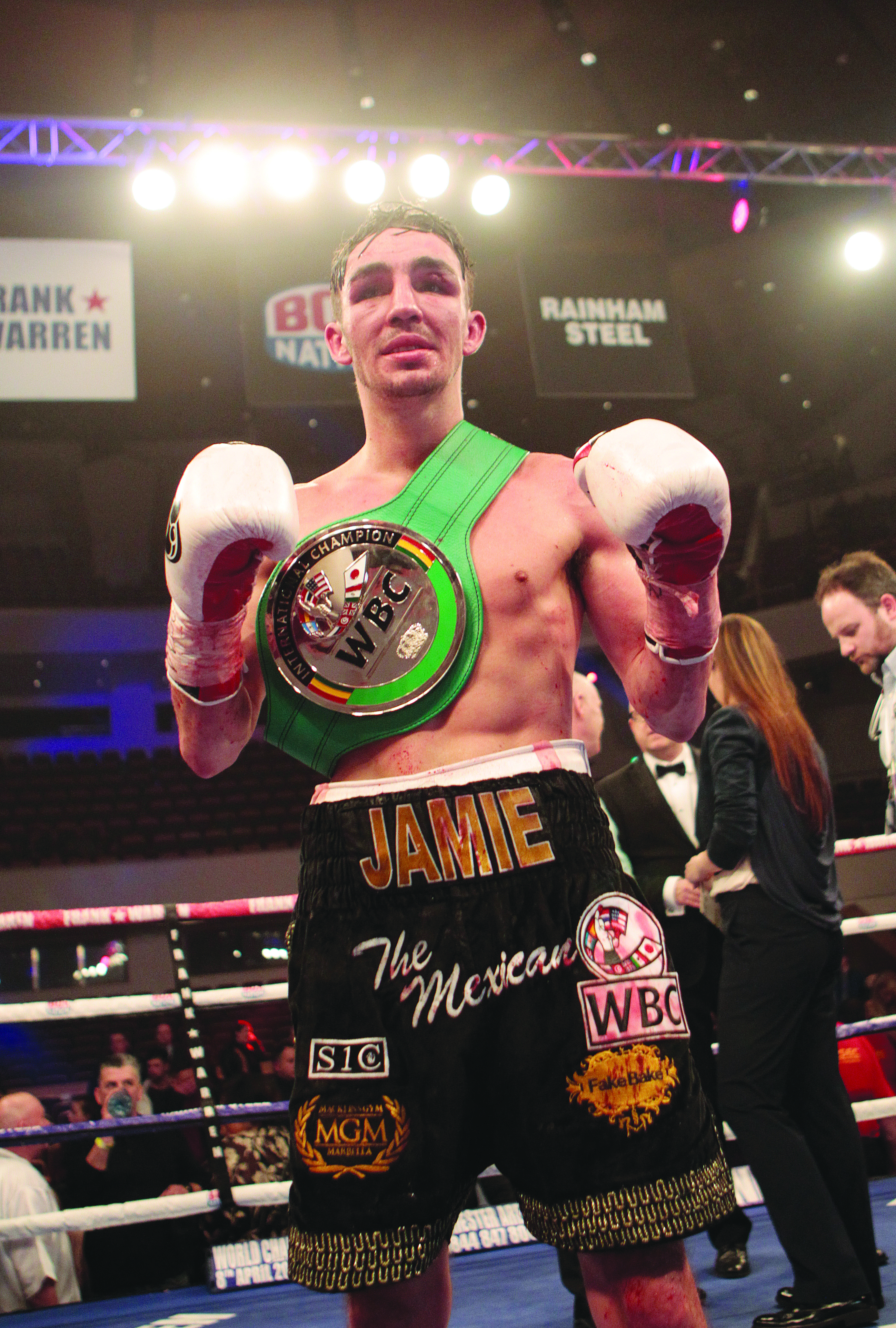 JAMIE Conlan does not do things the easy way and it was the same story on Friday night when he picked himself off the canvas in the eighth round to edge Yarder Cardoza on a split decision to claim the WBC Silver International super-flyweight title and keep his world title ambitions on track.

‘The Mexican’ has been earning a reputation for producing thrill-a-minute action and again, he played his part in an edge-of-the-seat battle with the Nicaraguan he seemed to be controlling for the most part until he was tagged by a right hand in the eighth and went down that left him hanging on a little as he completed 12 rounds for the first time in his now 19-0 career.

“The first few rounds were grand,” he said after.

“I thought I was just easing into it, but he caught me high on the top of the head with a good shot. It didn’t hurt too much, but just knocked my equilibrium off and I knew then he was going to have a big onslaught. Like (Junior) Granados before, I knew I was going to have to go out in the next round and make a statement. If I didn’t he would find a lot of courage and push on so I knew I had to be the boss in nine.

“I had to get on the jab, use the distance well because I could see that overhand right coming all the time. The shot he caught me was just out of my range on top of the head, but you live, you learn.

“I felt it going down my left leg when he caught me but when I went down I looked and knew everything was alright.

“With Granados, every punch was sore but he didn’t hurt me very much. The thing is, the South Americans whip them in and the shots gather momentum.”

Conlan was boxing well in the early rounds although Cardoza – a former world title challenger – was having his own success, landing with a couple of hard rights that Conlan took well.

However, it was the home boxer who was banking most of the rounds with his reach advantage and jab good, but disaster struck in the eighth when a right hand landed on his temple with a couple of follow-up head shots knocking him over.

Cardoza ran in for the kill, but Conlan held on and saw out the round before producing a good ninth to take the sting out of the visitor’s challenge. The tenth saw Cardoza up the tempo once again with a cut appearing over Conlan’s eye and the Nicaraguan seemed stronger going down the stretch as he marched forward, but Conlan also had some success with his long levers finding the target.

It was a nervous wait for the verdict, the tension rising further when it was announced a split decision, but the 30 year-old West Belfast man had done enough to get the nod from two of the judges – 115-113 and 114-113 – with the third card scored 115-112 in Cardoza’s favour.

“I’m not a cocky guy so I’m not going to think I won every round,” said the victor after.

“I asked the corner what did they think and they said ‘yeah you’ve got it’. When I heard it was a split decision, I knew he had some momentum.

“My shots were more crisp and I probably should have followed up with them because when I hit him he made a face.

“I didn’t capitalise on that, but went back to my boxing. The round after he dropped me, I pushed him back and could see he was uncomfortable.

“The last two rounds I knew he was going to have a big push to show his machismo, so for the last round I rode out the first minute and got back on the jab.”

It was another show of guts and courage from Conlan who has gained the reputation of being one of the most exciting boxers around given his wars against Junior Granados, Anthony Nelson and now Cardoza.

The hope is that he has now earned his world title shot that could come later in the year, but Conlan revealed after that a move up to bantamweight could also be an option as he tried to get to the bottom of why he has been forced to go to the well of late.

“I was good at times, silly at times and below par,” he admitted.

“I’m unhappy with myself as I could have performed much better. The lads are pushing me in directions where I should be performing better. You have to be honest with yourself and say that you should be doing people like that much easier.

“Maybe super-flyweight is a step too far and this is why I’m getting hit with these silly shots, but they’re not hurting me. The shot caught me and it was a flash, I was down.

“It’s possible (to move up) but I do make it and made it easy this time. I’ll just sit down with Danny (Vaughan, trainer) who has a lot of experience and see what he thinks. For some reason these shots don’t hurt me in sparring or on the night, but I find myself going down, it’s silly.”

Conlan also acknowledged he has had to dig deep in recent times as his level of opposition has grown, but the work in the gym and that experience of coming through a crisis in the past stood to him.

“Blocking and punching was what we were working on in camp because he did swing wildly,” he explained.

“It was just one or two shots I got caught with. For eight weeks, nobody hit me with those and then tonight I get in and think ‘go on, hit me’. He did in the first and he had more power than his record suggests, but he threw the right from his hips and shouldn’t have caught me.

“If I was intelligent I would have moved for the 12 rounds or knocked him out in the first, but yeah, having been there before I knew I was able to do it again.

“Doing this out in LA with guys who are doing it every day made me think not to lose belief or feel sorry for yourself when that happens. That’s when you can get stopped so I had my whits about me.”

New York and younger brother, Michael’s pro debut on Friday is where the attention turns to for the Conlans before Jamie looks at what is next, but he is hopeful a potential title fight can be at home.

“That’s up to Frank (Warren) and my friends at MTK,” he explained.

“They know where I need to go and how to go about it, but I think every fight should be in Belfast because if they’re not entertained, they don’t know boxing.”