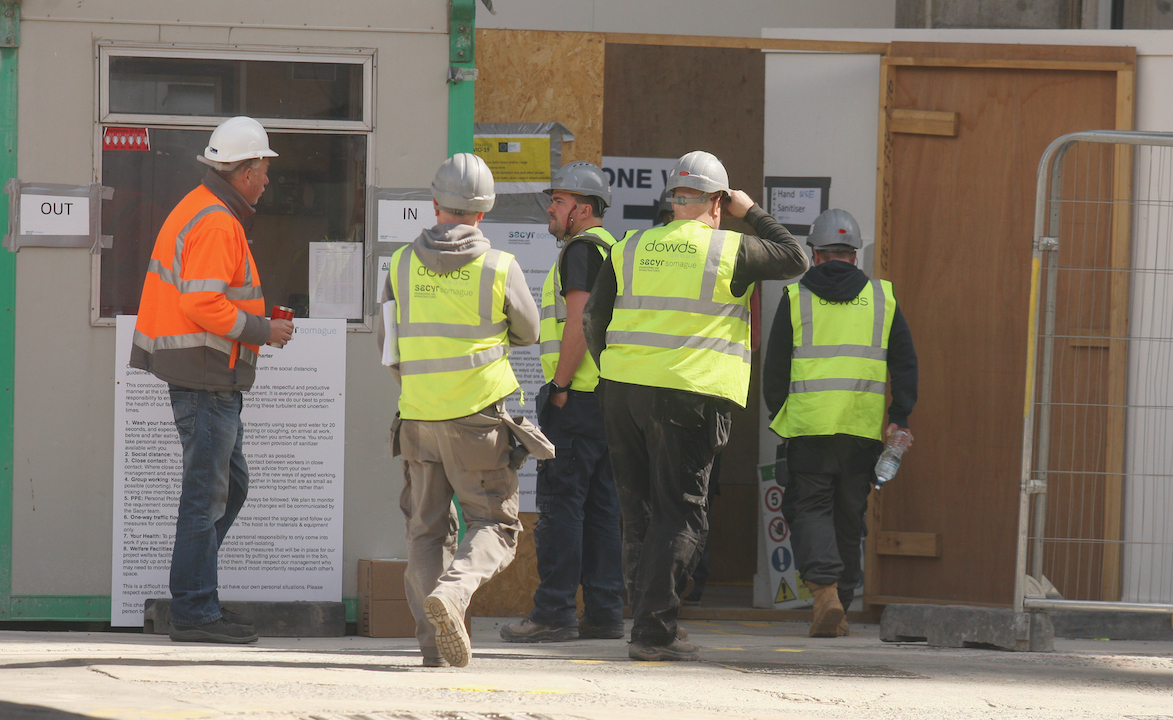 Workers in the construction sector are among the first  to return to the world of work this week as the Executive's plan to exit the Coronavirus lockdown gathers pace.

Construction sector leaders says that was always a given as the nature of outdoor work and space for social distancing on sites lessen the dangers of contracting the virus.

That said, some building sites which were deemed essential have remained open since the pandemic first roiled the workplace in mid-March.

That designation covered many trades such as plumbers and electricians who were needed to carry out essential maintenance at hospitals, government offices and other institutions.

But now it is the building sector which is at the vanguard of the reawakening of the economy.

The first vehicles on the road each morning — including Monday's bank holiday — are the building supplies lorries and the vans of the self-employed contractors, many of whom aren't covered by the relief schemes introduced by government to help businesses weather the Covid-19 storm.

That's good news for companies which supply building materials and depend on open sites to pay the bills — but the return has not been uniform or universal.

Among the first sites to return to work was the new Amazon super-warehouse in the Cathedral Quarter where tight onsite regulations around social distancing and hygiene are now the rule.

The Ulster University has also been keen to keep the cranes moving at its oft-delayed city centre campus but a foreman there on Monday said numbers on-site had been halved from 600 to 300 to enable social distancing.

Others have been frustrated at being unable to carry out essential work. Aidan Flynn of MFS, which has extensive contracts in the education estate, says his workers are ready to go back into schools to carry out maintenance work but can't get the green light from Education Minister Peter Weir.

"Schools have to be repurposed so that we have more sinks for hand washing - including in classrooms — and modifications made to enable more space to be used," he said. "Now is the perfect time to carry out that work when schools are empty."

Workers returning to building sites are being met by the new normal: turnstile entrances, sinks on site for hand washing, and temperature testing.

Belfast builder Stephen McMurrough of Eastcoast Estates is hoping to have work resume on a social housing development in Carrickmacross, Co Monaghan, later this month in line with Irish government guidelines.

But he is worried about the future of the sector.

"Social housing will continue to be built," he said, "but I wouldn't be so sure about commercial work. As for private homes, that is going to be very difficult to call. Potential buyers, especially mid-market, will be looking for lower prices and that may make building unviable. In short, if you are going to build homes for the private market, it's time to think again."

However, with the demand for social and affordable homes remaining high, Mr McMurrough believes the government should take up the slack by investing heavily in new-build. "Most building companies will be putting on the brakes, and, sadly, some will go under and workers will be laid off. By investing in social housing, the government could provide jobs to those people and keep those businesses alive."

David Morgan, whose new Arizona Café outlet is now two months behind schedule, says the main problem with returning to the small Andersonstown Road site full time is the materials supply chain. "Some of the bigger merchants supply companies furloughed all their staff and haven't come back yet so we can only do bits and pieces on the site at the minute," he said. Our glazer may not be back until the end of July so that is a block. It's really not business as usual out there when it comes to the supply chain."

He also acknowledges that utility providers are prioritising projects which are deemed critical to the pandemic fightback. "That means it is taking longer to get a date from NIE Networks as to when they would be able to connect us to the power supply. As a result, I have had to look at the options around installing a generator, if it comes to that."

Building companies, large and small, are keen to stress that the health of their workers is the priority as the return to sites begins. "No one wants to be the firm accused of making people sick," said one foreman of a city centre construction site. "Last week, I had a young guy who was failing to wear his mask. I gave him a warning and told him that if it happened again, I would put him off the site."

Jim Ferrin of Mossgiel Development, who was about to start work on a 49-home scheme on the peace line at North Howard Street when the pandemic hit, is keen not to lose momentum. "We have to move forward and be positive," he said. "As someone who comes from West Belfast, I realise how important homes are to successful communities. My scheme could be affordable homes or it could be taken over by a housing association for social housing. Either way, those of us who can need to send out the message that we won't be deflected by this virus and that things will get better. The construction sector has a part to play in the rebuilding of this society and I want to be a part of that."