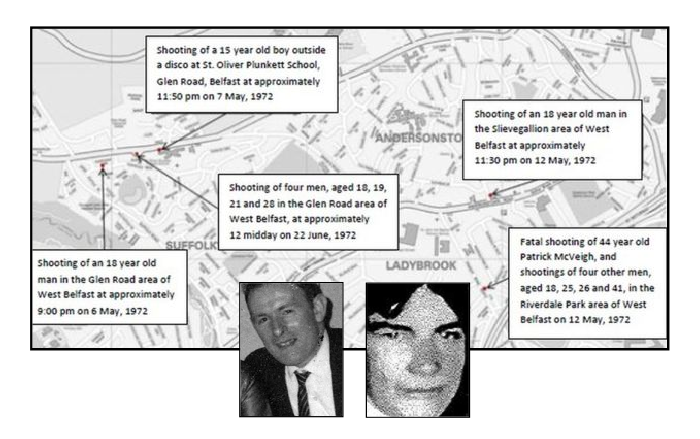 Police investigating the actions of a murderous band of undercover British soldiers in West Belfast in the 1970s have launched a drive for information.

The shadowy Military Reaction Force (MRF) – whose members have admitted to killing unarmed people – were behind a wave of terror in nationalist districts.

Seven months after the sensational admissions by former MRF members on the BBC’s Panorama programme of drive-by killings, the PSNI have begun the process of collating information about 18 MRF shootings, most of them in West Belfast, in which scores of people were wounded and two were killed.

The men who died were 44-year-old Patrick McVeigh (above left), shot dead at Riverdale in May 1972, and 18-year-old Daniel Rooney (above right), who was killed in the St James’ area in September of the same year.


Detective Chief Inspector Peter Montgomery said police are interested in speaking both to eyewitnesses and former members of the MRF.

“We know these events took place a long time ago and we know they took place during one of the worst years of the Troubles when many shootings occurred but we believe there are people out there who can help us progress this investigation and we are appealing to them to contact us,” he said.

“But in order to progress this investigation, I need as much information from the public as possible.

“I am appealing to anyone who witnessed any of the shootings or anyone who has any further information in relation to them to come forward and talk to us.

“I also want to speak to former members of the MRF who served in Northern Ireland and would ask them to come forward and speak to my officers.

“I appreciate these incidents took place a long time ago but I believe there are people in the community and elsewhere today who were witnesses to them, remember them or talked about them.

“I need their help to progress this part of the overall investigation.