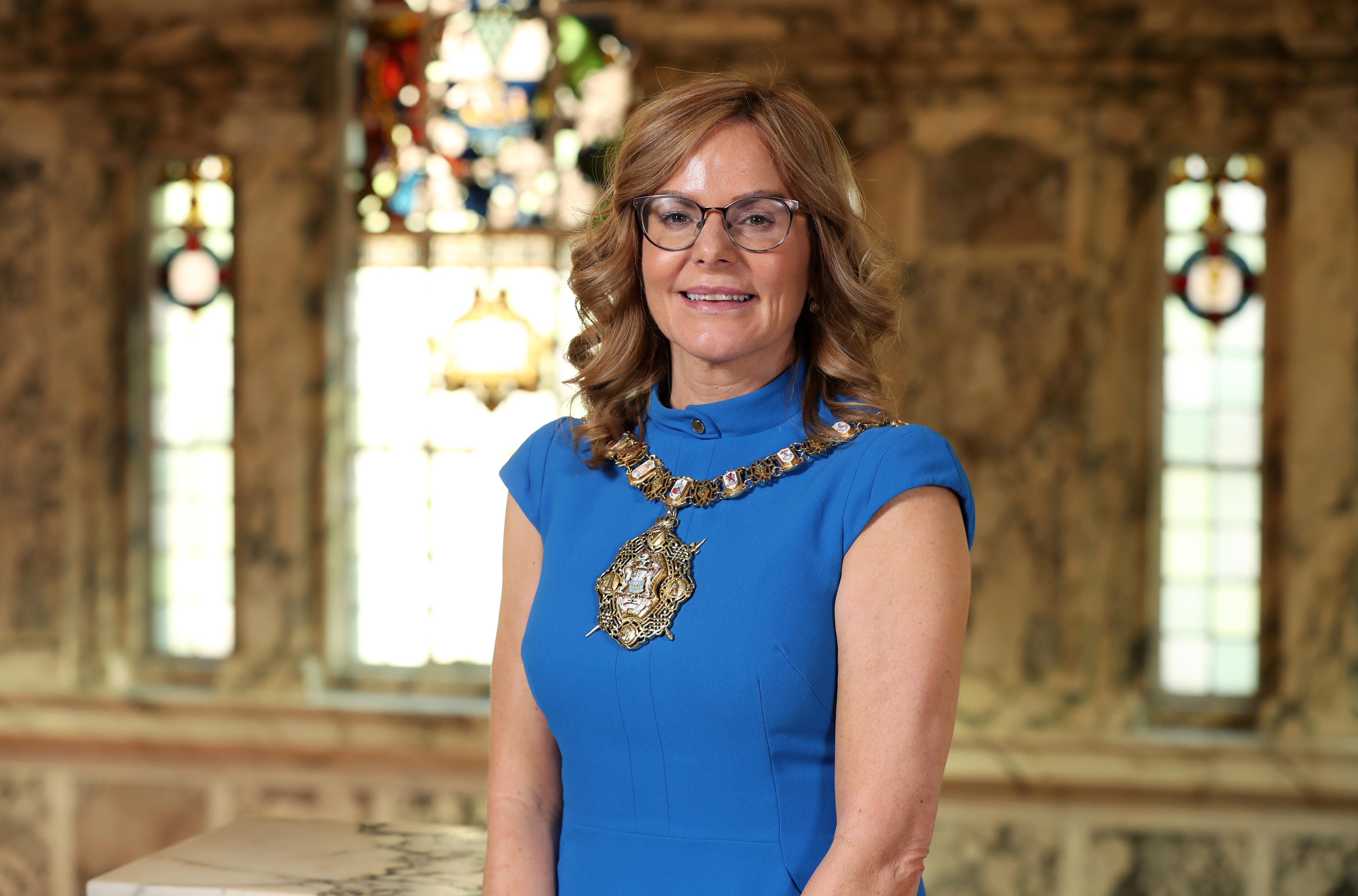 WEDNESDAY night's meeting of Belfast City Council began with the AGM which traditionally sees office holders change alongside membership of committees and outside bodies.

Cllr Long added that he would be happy to go down in history as the shortest term served by a Lord Mayor in history and congratulated Cllr Tina Black on being selected to replace him.

Sinn Féin group leader, Ciaran Beattie nominated Cllr Black for the role of Lord Mayor and paid tribute to her mother Bell who he said was a “fierce community activist and advocate for people’s rights”.

Assuming the chain of office of Lord Mayor Cllr Black said that she was slightly emotional but that there is a warmth in our city which refuses to be diminished and that her background in community development will underpin her year as Mayor.

All of the parties paid tribute to Cllr Black on her appointment with the UUP's Alderman Jim Rodgers noting how she had been “fast and efficient” in chairing the SP&R committee.

Taking the chains, @ShellKell00 says that both herself and @CllrBlack have big shoes to fill. Paying tribute to Ald Haire she says he has been a "proper gentleman" and that she has a lot to live up to. She says that she looks forward to working with the Lord Mayor pic.twitter.com/W3nGzMbQhQ

Outgoing Deputy Lord Mayor, Alderman Tom Haire was replaced by Alliance’s Cllr Michelle Kelly who described him as a “proper gentleman” and said that she was looking forward to working with the new Lord Mayor on the many issues of mutual interest.

The meeting was then adjourned for almost 35 minutes to allow party group leaders to meet and discuss the appointment of positions on committees.

While discussing the meeting from the Strategic Policy and Resources Committee, SDLP councillor for Colin, Brian Heading, raised his concern about the closure of the Ulster Bank branch in Dunmurry. He noted that the Council had previously written to the bank about 600 proposed job losses back in November 2020 and had yet to receive a response. He asked the new Lord Mayor to arrange a meeting with party group leaders and the Financial Services Union within three weeks, which was agreed.

Just spoke in the monthly Council plenary on my SDLP proposal for @belfastcc to engage with @UNISONNI’s #FreeSchoolMealsForAll campaign. I pleaded with DUP Councillors to stop their party’s boycott of the institutions and ensure 90,000 children get holiday hunger payments. pic.twitter.com/Nnyq0OByvA

When it came to the People and Communities Committee, the DUP's new Group Leader, Alderman George Dorrian requested a recorded vote to reject a minute opposing the creation of a free port in Belfast. Sinn Féin’s Ronan McLaughlin argued that there was much more important things to be getting on with in a cost-of-living crisis as free ports were not an issue for the Council, but one for the Executive. Cllr McLaughlin also noted that the city would not be able to benefit from any tax benefits associated with a free port due to the Protocol.

Alliance Cllr Michael Long said that he agreed with Cllr McLaughlin in that it is a complex issue but that his party would be voting in favour of the DUP amendment to allow the issue to be explored further.  SDLP Councillor Brian Heading compared the issue of free ports to 19th Century working conditions in the docks. He said that there are risks associated with them and that staff could end up on zero hour contracts, forced to work longer than the working week and that their terms and conditions could be changed “with the stroke of a pen”.

When it came to a recorded vote, the amendment fell with 22 votes for and 26 against.

Now we move on to the final item of business, a motion proposed by @CarlJWhyte pic.twitter.com/GJLxzBRPEw

Perhaps the most dramatic debate came from a motion proposed by SDLP Cllr Carl Whyte and seconded by Cllr Gary McKeown to call on the British Government to abandon their Legacy and Reconciliation Bill. Beginning by reading an excerpt from Lost Lives which detailed how his grandmother had been killed alongside an RUC officer in a bomb left at her home by the UVF, Cllr Whyte said that “forgiveness does not undo people’s right to justice".

Sinn Féin Councillor Ryan Murphy recalled his own family’s case with the Police Ombudsman in relation to the killing of his grandfather, Terry, and recalled how Relatives for Justice had described the bill as “perpetrator led and perpetrator driven.”

The death of my grandmother, killed by the UVF along with an RUC officer, taught our family the importance of justice & forgiveness.

The British Government’s bill offers neither.

Proud that opposition to it came from across the chamber at City Hall with our motion tonight. pic.twitter.com/Ci3eRz7GJY

However, when it came to UUP Alderman Sonia Copeland’s turn to address the chamber, the mood and tone of the debate changed. Speaking as a former police officer, Ald Copeland said that while her party oppose the Government’s bill, they would be abstaining on the motion and raised concerns around the issuing of so-called “On the Run” letters to republicans and what she deemed an “attempt to rewrite history” by pursuing investigations into veterans.

Rising to address the chamber, Alliance councillor Emmet McDonagh-Brown called on councillors who couldn’t support the bill to "have a deep, long think about what they are trying to achieve".

DUP Councillor Dean McCullough began by reading a letter from the family of 13-year-old Leanne Murray who was killed in the Shankill bombing in 1993. Cllr McCullough referenced Gerry Adams carrying the coffin of one of the Shankill bombers and said that if Sinn Féin are serious about all victims they should call on the IRA's Army Council to "bring that long overdue justice" and lead by example.

Addressing the claims by Cllr McCullough, Sinn Féin’s Ciaran Beattie referenced “hatred” in his address and said that he probably wasn't born when most of these events happened. He added that he was embarrassed for Cllr McCullough's words and hatred towards Sinn Féin.

Green Party’s Áine Groogan said that she wasn’t planning to address the chamber but that politicians need to put their shoulder to the wheel to deal with legacy.

The DUP’s Cllr Dean Pankhurst called out Cllr Beattie’s comments with regard to Cllr McCullough’s address and that the Provisional IRA were responsible for killing more Catholics than the security forces.

Summing up, Cllr Whyte said that he was disappointed in the tone that the debate took. He added that he could have given an emotive speech about the UVF and how it impacted his family but he chose not to make political digs .Addressing the stance taken by the UUP, Cllr Whyte noted that they had originally signed up to the Stormont House proposals before changing their mind. The motion went to a vote and was passed.