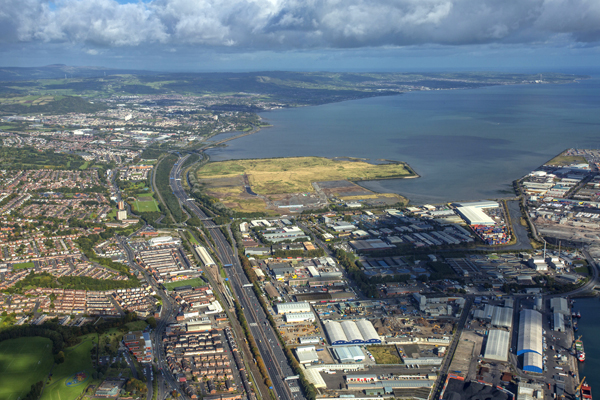 FOUR separate proposals have been received by Belfast City Council for a 200-acre section of the Giant’s Park site on the North Foreshore of Belfast Lough.
The former landfill site lay vacant until last year when Belfast Harbour opened a £20million film studio complex while up to 400 new jobs are anticipated at a new Environmental Resource Park, situated across 30 acres the southern area of the site.
This week, at MIPIM conference in Cannes, Gerry Millar, Belfast City Council’s Director of Property and Projects said the proposals will now enter into a process of “clarification, evaluation and political endorsement”.
“This 200-acre portion of the Giant’s Park site represents one of the largest single commercial development opportunities ever to have come to the market in Belfast and, unsurprisingly, following the marketing of the site by our agents GVA, has attracted a significant amount of interest from local and international parties alike,” he explained.
“I am pleased to say that we have received four proposals for the site – each very different and very exciting in their own right, and each presenting their respective vision for a commercial leisure and tourism-led, mixed used development.
“The Council will now enter into due process in subjecting these proposals to intense clarification, evaluation and political endorsement before any decision is reached as to which is taken forward.”
Councillor Mairead O’Donnell, Chair of City Growth & Regeneration Committee, added that at 340 acres, Giant’s Park is the “largest regeneration site in the city” and offers “huge potential” to deliver economic, social and physical benefits.