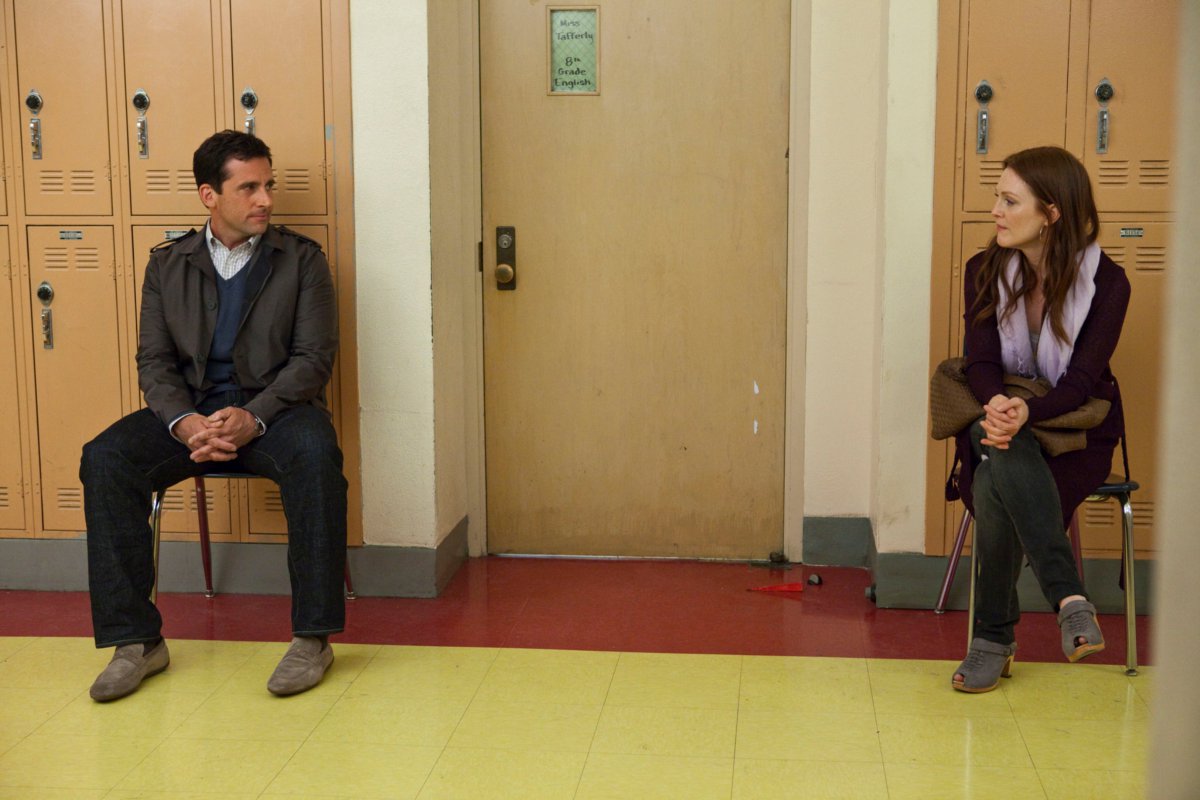 What's the story? Cal (Steve Carrell) and Emily Weaver (Julianne Moore) have been married for 25 years. However, their seemingly rock-solid marriage comes to an abrupt end when Emily announces during a dinner date that she wants a divorce and Cal is devastated when he learns that Emily has slept with her sleazy work colleague David Lindhagen (Kevin Bacon).

Cal is crushed and, after moving out of the family home into a bachelor pad, he resorts to propping up the bar at an uber-trendy watering hole that's frequented by stylish studs and beautiful women. It’s here that he meets ladies’ man Jacob Palmer (Ryan Gosling), a smooth operator who has perfected the art of seduction.

Taking the dreary, cuckolded Cal under his wing, Jacob slowly but surely transforms the once uninspiring hubby into a masculine, metro-sexual lothario.

However, Cal is still very much in love with Emily and sets out to win back her love whilst Jacob is impressed when he meets Hannah (Emma Stone), a girl who doesn't fall for his slick charms that easily.

Directed by Glenn Ficarra and John Requa, the guys responsible for writing the dark yet hilarious Christmas flick Bad Santa, Crazy Stupid Love is a jovial jaunt into romantic-comedy territory for the writing and directing duo.

On the surface, Crazy Stupid Love looks very much like your usual rom-com, but do not be fooled, this is one rom-com that will be enjoyed in equal measure by both sexes.

What Crazy Stupid Love has that other rom-coms don't is a witty script delivered by an A-list cast and a plot that's superbly complemented with a couple of surprising twists that you won't see coming. It’s also got just enough nutty slapstick which works hand in hand with a genuine emotional core.

The cast play their parts wonderfully with Carrell giving us an honestly downtrodden Cal who receives the wake-up call he needs with the help of Ryan Gosling's effortlessly smooth, smart and sexy sexual predator Jacob. Both Carrell and Gosling share a playful chemistry that makes their on-screen banter all the more enjoyable to watch.

The wonderful Emma Stone is brilliant as Hannah, an intelligent and beautiful young woman who can see through Jacob's cheesy chat-up lines. Stone is a delightful actress to watch – she expresses a light, easygoing personality and also plays up the goofiness, making her a wholly likeable and endearing leading lady.

There's also a slightly dippy yet endearing sub-plot involving Cal's love-obsessed son Robbie (Jonah Bobo) who has fallen head-over-heels for his blossoming baby sitter Jessica (Analeigh Tipton) and, even though it has more than a touch of Love Actually cheddar about it, it's still quite enjoyable watching Robbie go to great lengths to embarrass himself in the name of love.

A heartfelt tale of one man rediscovering his passion for the love of his life, Crazy Stupid Love is an amusing and endearing rom-com with a great cast, a witty script and is one of the funniest movies released all year.