Crude, rude and it’s all about food 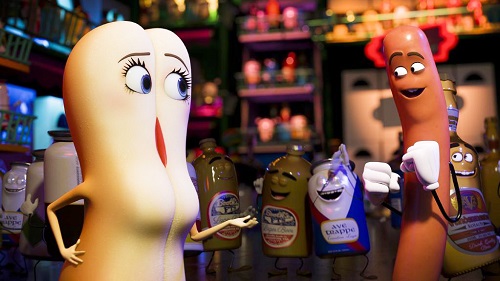 IN another realm of existence, there’s a magical, colourful world that exists right under the noses of the human race. Believe it or not, it’s a world where our food is alive and well, waiting patiently in the supermarket for shoppers from far and wide to come and escort the diverse assortment of food products to paradise.

Frank (Seth Rogen) and Barry (Michael Cera) are two happy-go-lucky hotdogs who dream of being united with tasty buns like Brenda (Kristen Wiig). Like every food item, it’s their dream to be selected by a shopper who will pop them in a trolley and bring them home to spend the rest of their days in glory. But their dreams quickly turn into a nightmare when a jar of mustard (Danny McBride) is returned to the supermarket, telling a horrific tale of how humans, chop, slice, boil, burn and eat their chosen foods. It’s an image of hell that shocks the entire population of supermarket produce.

So, staging a revolt against the greedy and perpetually hungry human race, Frank and his brethren fight back against the shoppers who dare to sink their teeth into their tasty brothers and sisters.

Warning: Sausage Party is not your average animated movie, and although it looks like a cross between Cloudy with a Chance of Meatballs and Toy Story, it actually plays out like a mishmash of Cheech and Chong, Pineapple Express and, oddly enough, Toy Story.

In short, it’s insane, bawdy, naughty, irreverent comedy at its most rude and crude and you’ll either love it or loathe it.
Written by Seth Rogen and Evan Goldberg, the team responsible for the controversial, comedy flop The Interview, Sausage Party has been conceived and executed with the same, juvenile mindset so how much you will enjoy this movie really will depend on how crude your sense of humour is.

While the animation is quite cutesy, there’s a disturbing depravity at the heart of this movie and, although the little critters look cute, they’ve got an X-rated mindset that’s mean, sexualised and rather nasty. It’s a one joke concept from beginning until the very suggestive and downright weird finale, making Sausage Party an adult stoner flick wrapped up in a faux-Pixar wrapping.

NOT for the easily offended or faint-hearted, if you like your humour rude and crude, you’ll probably love Sausage Party. If this sounds like your idea of a nightmare, then avoid it like a talking sausage.