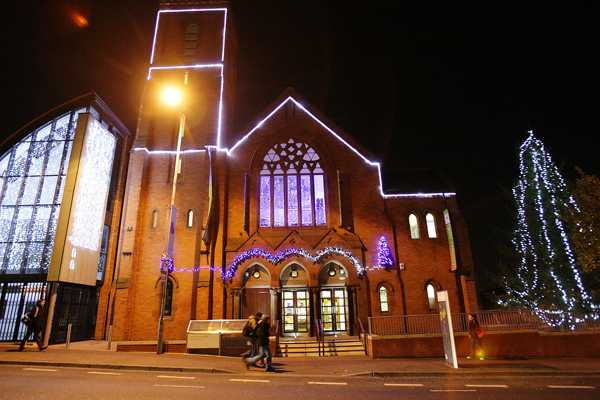 THE GENERAL Manager of Springfield Charitable Association (SCA) says there is “a lot of blame” to be laid at the door of Stormont over the sale of the Cultúrlann.

Having been in negotiations with the Falls Road Irish language hub for close to two years over its sale, Terry McNeill told the Andersonstown News that it had been more or less “a done deal that the Cultúrlann would purchase the building,” so that capital funding could be released for SCA’s new Cupar Street project which is totalling £1.5million.

With no public funding being released for Cupar Street, Terry said SCA had no choice but to put the Cultúrlann up for sale. With the collapse of the Stormont Assembly in January the business case for the Cultúrlann to purchase its home of these past 21 years, “was not signed off” by the Department for Communities and SCA had been “left at the altar”.

“This business case for the Cultúrlann to purchase the building from us was pretty much final – why it wasn't signed off close to a year ago we don't know,” he said.

“The bottom line is SCA really need the funding. Trying to get the funding for Cupar Street has affected us physically, financially. We are talking about a £1.5 million project facility here for our older people and we are still short £650,000 for it," he said.

"We are borrowed up to our necks here. We have not received a penny of public money for this project; although we have received £350,000 from Space and Place that is critically time-bound. Working with older people, I guess, is not a sexy topic. With 12 per cent of the population in West Belfast over the age of 65 and married to this the highest mortality rates and top of the league tables in terms of chronic conditions; we are and have been fighting to get this project over the line for three years."

Terry said that SCA “need the money and we need it now – that's it plain and simple”.
“We haven't betrayed the Irish language in any way with this sale, we need the money to do what we are trying to do."

Terry described the past two years as ‘frustrating’.
“There is a lot of blame out there for what has happened here and those on the Hill need to hang their heads in shame at how this has been left.

“We appreciate many politicians have verbally supported our endeavours, but money talks and we need to commence the capital work now or the promised funding will be at risk and indeed – our entire organisation. With regards to the sale at this stage, the board [Springfield Charitable Association board] will evaluate the bids on Thursday and it looks like it will be first past the post and that's it. 100 per cent of the money from the sale is going into older people's services.

“We are not in a position to take any more risks.”

The board of Cultúrlann say they have put in a bid to purchase the building with the former Presbyterian Church continuing to operate as normal due to a stipulation of any sale being that the remaining 43 years on the current lease must be seen out.

“We’re delighted to have this opportunity to buy the building outright and we’re taking various steps to achieve this aim at present,” said Aisling Ní Labhraí, the Culturlann’s Executive Director.

Well-known Irish language speaker Fergus O’Hare said the Cultúrlann has played a central role since 1991 in developing the culture and language and that it “should be sold into the hands of the Cultúrlann committee who have steered it since its inception”.

“There has been a massive community response to this news with people asking ‘how could this happen?’ People are very much of the opinion that the Cultúrlann be secured to its committee.”