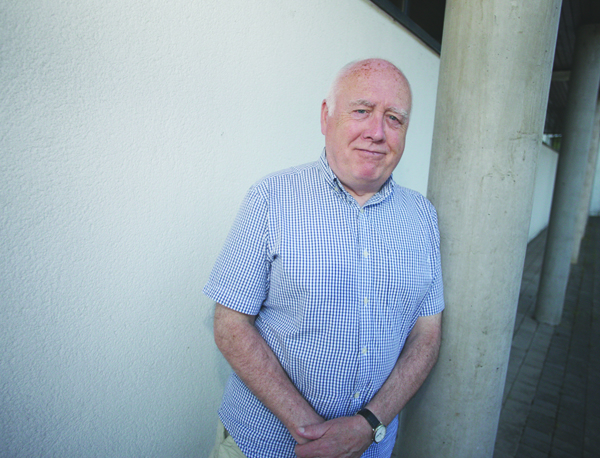 A PRISON memoir documenting the routines of everyday life in and out of the cells and the disintegration of a relationship are both contained in Then The Walls Came Down by celebrated author Danny Morrison.

Re-released to include chapters previously omitted from its first publication, Danny explained how the book, which is made up of a series of letters to his then partner from his desk in his cell in Long Kesh, “Tells stories, documents times, places, moments in history and are an observation at that time on the political process.”

“The book was first published in 1999, four years after I was released in 1995. I wanted to make it available as a Kindle download and also include more from my unpublished letters.

“There is one chapter in the book, entitled ‘Bitter Pill’ that I wrote on the day Gerry Adams lost his seat in West Belfast and I lost my appeal. I remember a loyalist prisoner in the cell opposite me hanging a banner out of his window saying ‘Gerry Out – Danny In’,” he laughed.

“I read several hundred novels in prison and made notes on all of them, in a way I was learning my own craft in how to become a writer,” he said.

“I wrote many letters during my time in prison, letters to Gerry Adams, Timothy O’Grady, David McKittrick, but the bulk were to my partner at that time.”

The 65-year-old spoke of how jail conditions and “Mandela-like sentences” made it hard to sustain relationships. “Jail undermines relationships. It is very difficult. I mean that is one of the conditions of imprisonment in that it is intended to break, demoralise people and put pressure on that relationship. I was sentenced to eight years at the time and served five and a half, being released in May 1995. In that time I had been divorced in jail, I had become a grandfather in jail, the ceasefire had been called.

“On my release I was basically homeless but began renting a house in Crocus Street with my youngest son Liam who came to stay so it was good to reunite.”

Danny spoke of how then then Sinn Féin President Gerry Adams advised him to take a year off from his role as party publicity director to spend time with his family. “During that time I began to write columns for the Andersonstown News, for the Guardian and what talent I had for communications I had given to the republican movement for 30 years. I realised in middle age that my only chance to become a full time writer was happening now. I explained to Gerry Adams, who was extremely supportive of me and my decision. that writing was where I wanted to put my energies into.”

Danny continued: “It was hard. My friend Bobby Storey was back in jail again, my brother was serving 25, 26 years, I felt a degree of disloyalty to these people by not necessarily walking away as such but by putting me, the writing career, first.”

Currently “looking a home” for his play Inmates, and working on another novel, Band on the Run, detailing the aspirations of a West Belfast taxi driver who wants to form a pop band in his 60s and tour the clubs, Danny spoke of how he will be attending a Q&A at the Andersonstown Social Club with Relatives for Justice deputy director Andreé Murphy as part of Féile an Phobail to discuss another novel, The Wrong Man, on August 1.

Then The Walls Came Down is available now priced at £12 from the Cultúrlann and Sinn Féin Art Shop.