Deal with the past before a new Executive 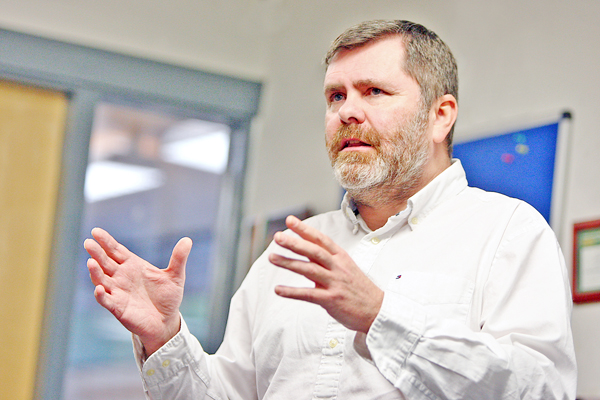 A LEADING victims’ campaigner has said that no new Executive should be formed following the elections without a clear strategy for dealing with legacy issues.

Speaking to the Andersonstown News, Director of Relatives for Justice Mark Thompson said “legacy is the defining issue for victims and their families in the upcoming election”.

The Executive collapsed earlier this month when deputy First Minister Martin McGuinness resigned over what he claimed was the DUP’s inability to deal with a number of key issues – including the past. Reflecting on the fall of the Executive Mr Thompson said that he believes Martin McGuinness was right to resign.

“This Executive has been brought down over Acht na Gaeilge, a Bill of Rights, dealing with past and equal marriage – those seem to be the strands, and for us the defining issue is about British violence and involvement in our country,” he said.

“There is a frustration among families. It has been demonstrated by Martin McGuinness’s resignation, that the inability of unionists to deal with these issues is unacceptable.”

Mr Thompson stressed the need for an open and ethical process for dealing with the issue of state violence.

“Many families in this community and beyond have been affected by direct state violence to which there is total impunity,” he stated.

“There was also collusion in which surrogates were used to kill people in this community. Currently we have James Brokenshire [British Secretary of State] and unionists politicians saying that the state were only involved in the killing of 10% of victims, and there seems to be a backlash caused by that. Ten per cent is not the accurate figure of killings by the state; it’s the amount of people they killed whilst in uniform.

“When we add the issue of collusion to the ten per cent figure that they killed whilst in uniform, we’re looking at figures anywhere between 30 to 35% of the people killed during the conflict. The fingers on the triggers, and the bomb detonators can be traced back to the British Government.”

Relatives for Justice have been eager to highlight the fact that mechanisms for dealing with the past have been agreed since the Stormont House Agreement in December 2014, but Mr Thompson stated that the British state and unionist politicians have been unwilling to implement them.

“There was an agreement in December 2014 and a commitment to a programme of implementation within that agreement,” he said. “It was the first time that we had both governments and all executive parties agreed legacy mechanisms.”

The human rights activist also claimed that the British government has deliberately acted to protect state agents involved in killings.

“They also used the cover of Article 2 of the European Convention on Human Rights – which is ECHR right to life – and they have used it in a Machiavellian way. They’re saying that they have a duty to protect the people who they sent to kill people’s relatives, and therefore they say that they can’t disclose their identities or they would be in breach of their Article 2 obligations.

“They have also worked with the unionist parties to block the necessary funds and resources to hold inquests.

“The reality is that killers have been protected when they came into these communities, they killed children, they killed unarmed civilians, and they killed republican activists when there was ample opportunity to make safe and effective arrests under the rule of law, yet they chose to deploy their resources to take life, and that all needs to be accounted for.”

Relatives for Justice hope to host a conference for victims at the end of February where families will be able to discuss the important issues for the upcoming negotiations. Looking to the election, Mr Thomspon said: “This election is an important period in which families can have their say.”

“The clear message is that post-election, if there is to be the establishment of a new executive, it can only be done in the context of the British government clearly setting out draft legislation that is completely acceptable, with no hidden caveats, and a clear timeframe for implementation, and the resources that enable the Lord Chief Justice to hold investigations must be immediately released.

“That is the only context, from our perspective, in which the executive can be re-established. There needs to be a solid mandate that enables people to move forward. People need to come out and cast their votes for parties who are willing to do the right thing by the families.”