JUDE COLLINS: Doug’s lifetime of service is put to the test 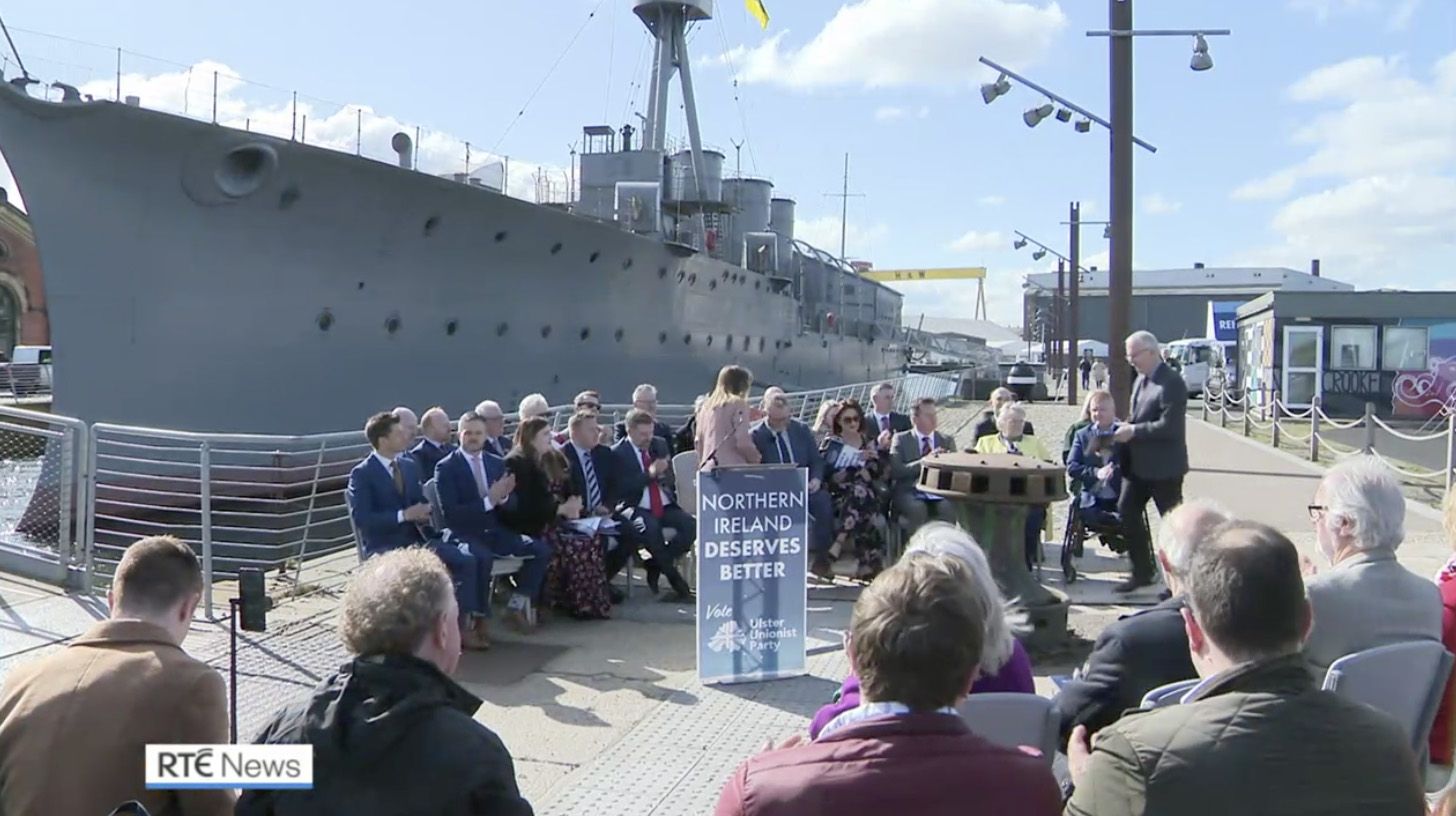 ALL HANDS ON DECK: The UUP election campaign was launched in the Titanic Quarter beside a World War One battleship – the coming Assembly election will be a crucial test for leader Doug Beattie

DOUG Beattie has at least one thing in common with Prince Andrew: his experience of ‘serving’ in the British armed forces has left its mark. With Prince Andrew, as most of us  know, his ‘service’ in the Falklands/Malvinas has left him incapable of sweating. With Doug Beattie, his service has left him with inescapable memories of the horror of war.

According to the BBC website, Doug was surprised by this. “I never really thought that at the age of 40 I would have to thrust a bayonet through another person and yet I had to do that in September 2006 and I watched a man die at the end of my rifle.”

Was Doug thinking of that when he launched the UUP’s election campaign in front of a battleship? Perhaps. He certainly looked a little wild-eyed, with a stiff breeze blowing his hair around as he spoke. But the bit in his speech that was truly hair-raising was when he said: “There will be no united Ireland in my lifetime, there will no united Ireland in my children's lifetime.”

I don’t know what age Doug’s children are. Doug himself is fifty-six and a bit overweight, but good, I would say, for another twenty or thirty years. And his children, as far as I know, are healthy too – they’ll probably go on for another, what, fifty years? So why did Doug say, in the face of mounting evidence to the contrary, that a reunited Ireland is more than fifty years away?

Because he thinks he knows what his electorate want to hear. To their ears, Doug’s definitive assertion will be sweet, sweet music. It mightn’t be the truth but it has a delicious ring. And it offered a practical element too: Doug says we should all just park this very distant UI project and get on with debating the bread-and-butter issues.

Unfortunately for him, Doug’s words will make many unionists roll their eyes and spit in the street. The UUP ratings have taken a serious tumble in recent weeks, and the hissing sound you hear is the air going out of the Beattie Bounce. When Mark Carruthers kept asking him if he’d be prepared to serve as deputy First Minister with a Sinn Féin First Minister, an unhappy Doug ducked and squirmed to avoid giving a yes/no answer.

If he’d had his rear nailed to the fence, he couldn’t have been firmer in his refusal to say yes or no.

Prince Andrew is hopeful that the way he oxtered his mother up the aisle at Westminster Abbey will re-set his relationships with the British public, which at the moment are in tatters. Doug is hopeful that his service in the British Army in Afghanistan will persuade unionist voters that he is made of the right stuff and deserves their vote. As the political shot and shell burst all around them, both men are hoping their service will be rewarded.

Right now, though, that seems unlikely. Prince Andrew’s reminder that he flew an attack helicopter in the Malvinas and damaged his sweat glands has been met with laughter and scorn.  Doug’s bayonet-wielding in Afghanistan doesn’t appear to have made a lasting impression on voters either, so in some desperation he’s followed up with assurance that a united Ireland is at least fifty years away.

To which I can only say ‘Fere libenter homines id quod volunt credunt’  (Virginia, if Boris Johnson can quote Latin, so can I. And it means, since you ask, ‘Men readily believe what they want to believe.’)

Some faithful royalists may well believe that a sweat-free Prince Andrew spent that fateful day giving his kids a treat at Pizza Express. Likewise there may be unionist voters who’ll applaud Doug for his bayonet work and his reassurances about a united Ireland. Not many, though. These are squeaky-bum days for the UUP.