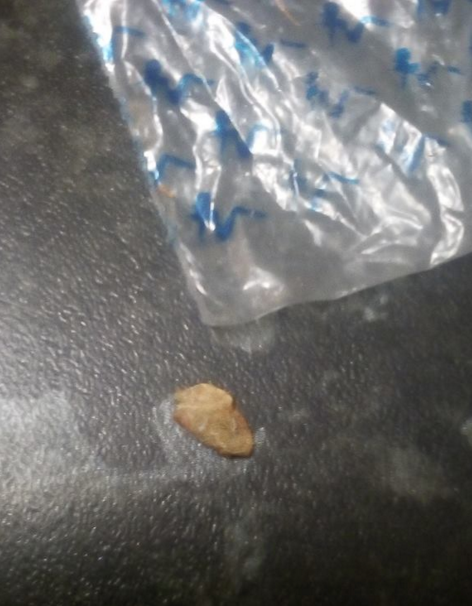 FIND: The bag containing a brown substance believed to be heroin

A CLIFTONVILLE resident who found a quantity of suspected heroin on a busy local street has said there is “growing concern” about a drugs epidemic in the area.
Local man Sammy Cusick discovered the substance while walking in the Manor Street area on Sunday night.
While drugs have been a problem in the area for some time, Mr Cusick said that heroin was become more prevalent.
“You always find bags of leftover cocaine or whatever else, but now you’re finding bags of heroin. It’s just concerning – it’s a step up,” he said.
“In the lower Cliftonville area it’s bad. Every area seems to be bad now. If you walk down any street in the centre of Belfast it would shock you. The very fact that the Cliftonville Road and North Belfast in general seems to have become a dumping ground for everything and everybody doesn’t help.
“I found heroin needles a couple of months ago in the waterworks behind solitude, but it has been going on for about a year or two at least within that area.”
Mr Cusick said that drug addicts, who can be seen roaming the area, have no place to turn to for help.
“If you are walking about the area you can actually see addicts walking about and it’s like something out of the walking dead – they’re like zombies,” he said.
“They’re victims as much as anyone else. People might look at them with horror or shock, but I look at them with sympathy because there is nowhere for them to go. We don’t have a drug rehabilitation centre, and if they go to mental health places they are being passed around.
“The waiting lists are ridiculous and they’re not getting the help they need. The community aren’t getting the health they deserve either.”
He added: “I don’t know the statistics, but I would hazard a guess and say that burglaries are up across the board because these people need to get this fix and they’re stealing stuff to feed their habit.”