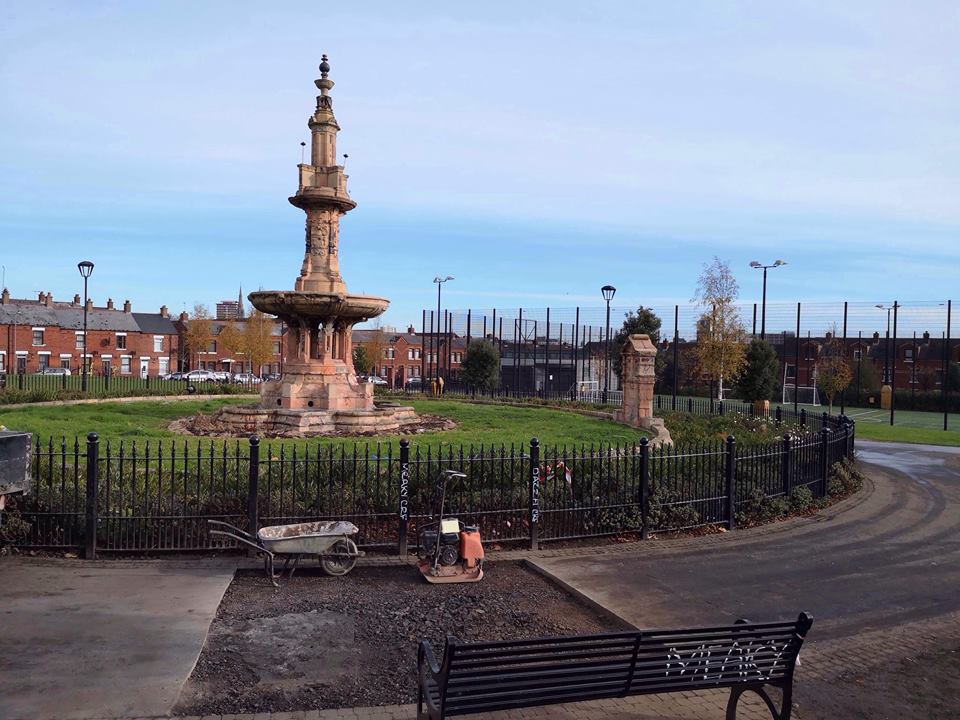 DAMAGE: Dunville park has been closed while Council workmen repair the area around the fountain

LOCAL representatives have slammed those responsible for “alcohol-fuelled vandalism” to the historic fountain area of the Dunville park resulting in its temporary closure.
The popular Falls park has been closed to the public since Friday past due to fire damage to the surface last week.
Workers’ Party representative Joanne Lowry said there can be no excuses for this kind of behaviour in our public spaces.
“The irresponsible actions of a small group of teenagers has caused considerable distress and inconvenience to local residents many of them pensioners,” she said. “This is alcohol-fuelled vandalism which has resulted in damage to the historic fountain and the temporary closure of the park. Parents must ensure that their children are not involved in this type of behaviour and the local community must be given the confidence to reclaim this valuable public space.”
Local Sinn Féin Councillor Claire Canavan urged those engaging in the anti social behaviour to stop.
“Dunville Park has been closed since Friday due to health and safety concerns,” she explained. “Anti-social behaviour, which took place in the park on Thursday night, resulted in damage to the tarmac surfacing near the fountain area of the park. It is such a shame that a minority of youths are intent on destroying facilities that are used and much needed in the community.”
A Belfast City Council spokesperson said workers are undertaking appropriate remedial action and hope that Dunville Park will re-open to the public in the next few days.
“We are aware of damage caused to the park by anti-social behaviour over the weekend, which has resulted in its closure,” added the spokesperson. “
We continue to work with local representatives and other partners to address the ongoing issue of anti-social behaviour in our parks. In the meantime, we would urge anyone spotting such behaviour in the parks to notify the police right away.”