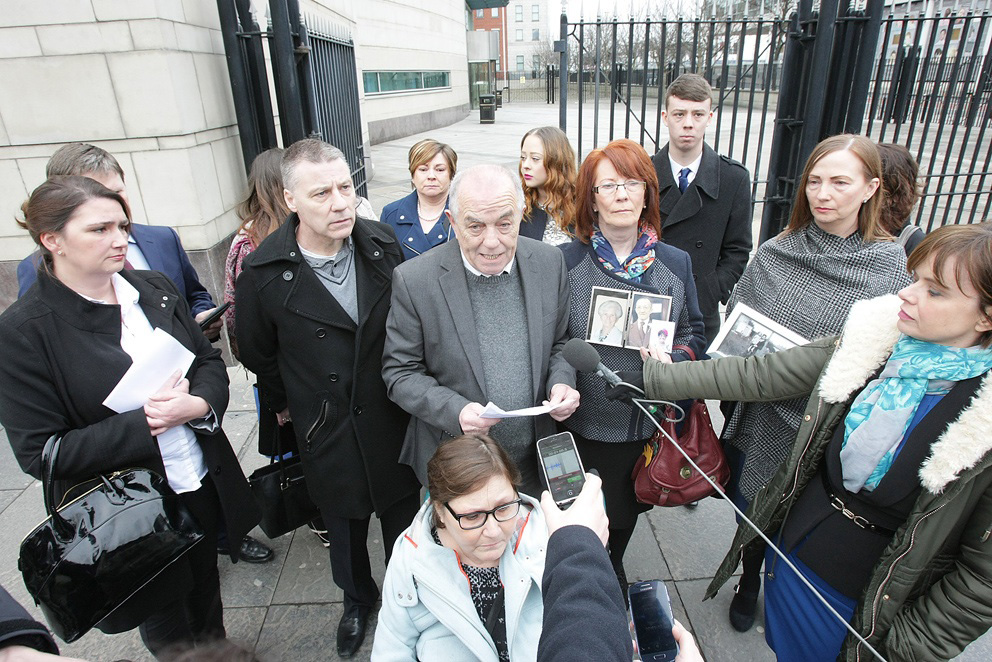 SPEAKING 44 years after his wrongful conviction for rioting and the brutal murder of his brother, the pent-up emotion of those long, dark years was evident in his voice and on his face as Terry Laverty spoke to the press at the Laganside courts complex.
“On August 11, 1971, my brother John, an unarmed and defenceless civilian, was murdered,” said Terry. “As he lay in the street bleeding to death, I was being arrested just yards away. It was two days before I knew he was dead and almost two days before my parents knew that I was not.
“That Christmas there were no celebrations in the Laverty household. There were no lights, no trees, no laughter. Seven children were grieving the death of one brother and missing another who, at 18 years old, was spending Christmas in prison.”
Yesterday at Belfast County Court, a judge quashed 61-year-old Terry’s conviction for rioting after being told that the Public Prosecution Service would not be opposing the Ballymurphy man’s appeal. Terry was convicted on the evidence of a British soldier – evidence that was subsequently withdrawn by the soldier, who has said he signed a witness statement identifying Terry as a rioter without even having read it.
John Laverty (20) was one of 11 innocent people who died during the Ballymurphy Massacre of August 1971. The victims were killed by the same Parachute Regiment who six months later would be responsible for the Bloody Sunday slaughter in Derry.
And in a twist that could have profound implications in the Ballymurphy relatives’ quest for justice, it’s claimed that the same soldier whose concocted statement led to the conviction of Terry Laverty had been responsible for the shooting dead of Terry’s brother John, claiming that the young man had been armed when he opened fire. Legal counsel for Terry Laverty say they will now press to have the soldier arrested and questioned on allegations of perjury and will pursue a civil action on Terry’s behalf for the damage caused to his good name and reputation.
“I had been wrongly convicted of riotous behaviour and imprisoned – convicted solely on the word of a soldier who has admitted, more than 40 years later, that he lied,” said Terry. “He lied in his statement and he lied in court. I was not rioting. There was no riot. At my brother’s inquest, the soldier who shot him said my brother was armed. He said he was a gunman. He was the same soldier who has admitted his evidence against me was a total fabrication. Today I have been proven to be innocent and the soldier has admitted his guilt.”
Andrée Murphy of victims’ group Relatives For Justice said: This is an important step forward in addressing an egregious violation that by any standard constitutes a war crime. There will be many others who were also subjected to such torture and hopefully the courage of Terry will give them hope to come forward.”